Riding the CSR-1 with Dale, Walt and the rest of the guys 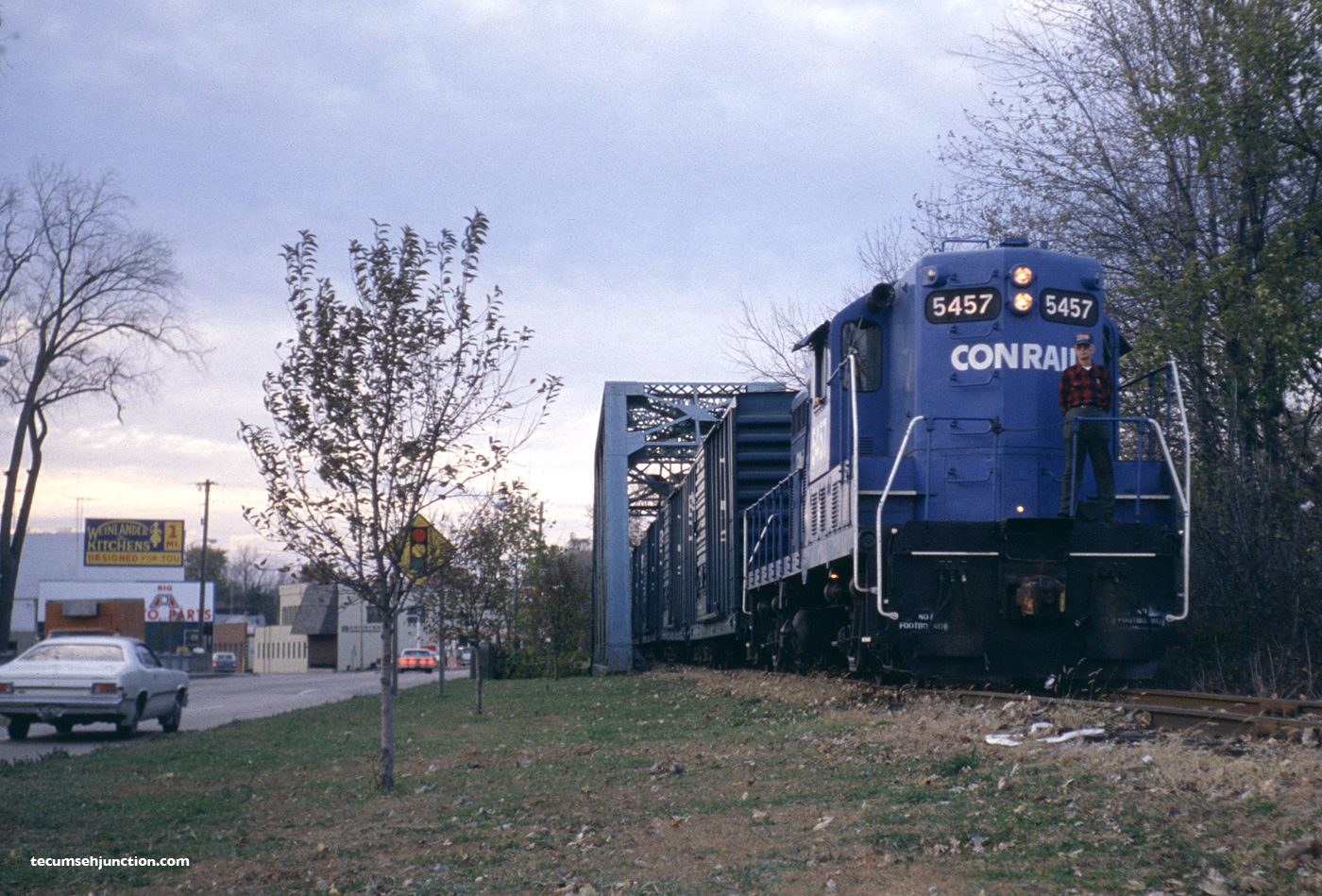 A man and his steed—Conrail engineer Dale Stultz poses on Conrail GP-8 #5457 at Blissfield, Michigan on 03 November 1980.

Photos by the author

CSR stood for the Clinton Switch Run—the Conrail designation for the local freight that ran from Toledo, Ohio to Clinton, Michigan on the remaining portion of the NYC branch that used to run from Lenawee Junction, MI, where it connected with the NYC’s “Old Road” running from Toledo through the southernmost counties in Michigan. It went from Air Line Junction yard in Toledo, through Sylvania, Ohio, into Michigan and through Ottawa Lake (where there was no lake, but a large swamp, the Cottonwood Swamp), Blissfield (home of the famous “3 bridges”—the railroad bridge for the NYC, the bridge for the Toledo and Western interurban railroad, and the highway bridge), Adrian, Hudson and Hillsdale. Here the Old Road headed south to South Bend, Indiana and then into Chicago.

The branch line ran from Lenawee Junction north, crossing the Wabash line from Detroit to St. Louis at Raisin Center, continuing to Tecumseh, Clinton, Norvell, Napoleon and into Jackson. 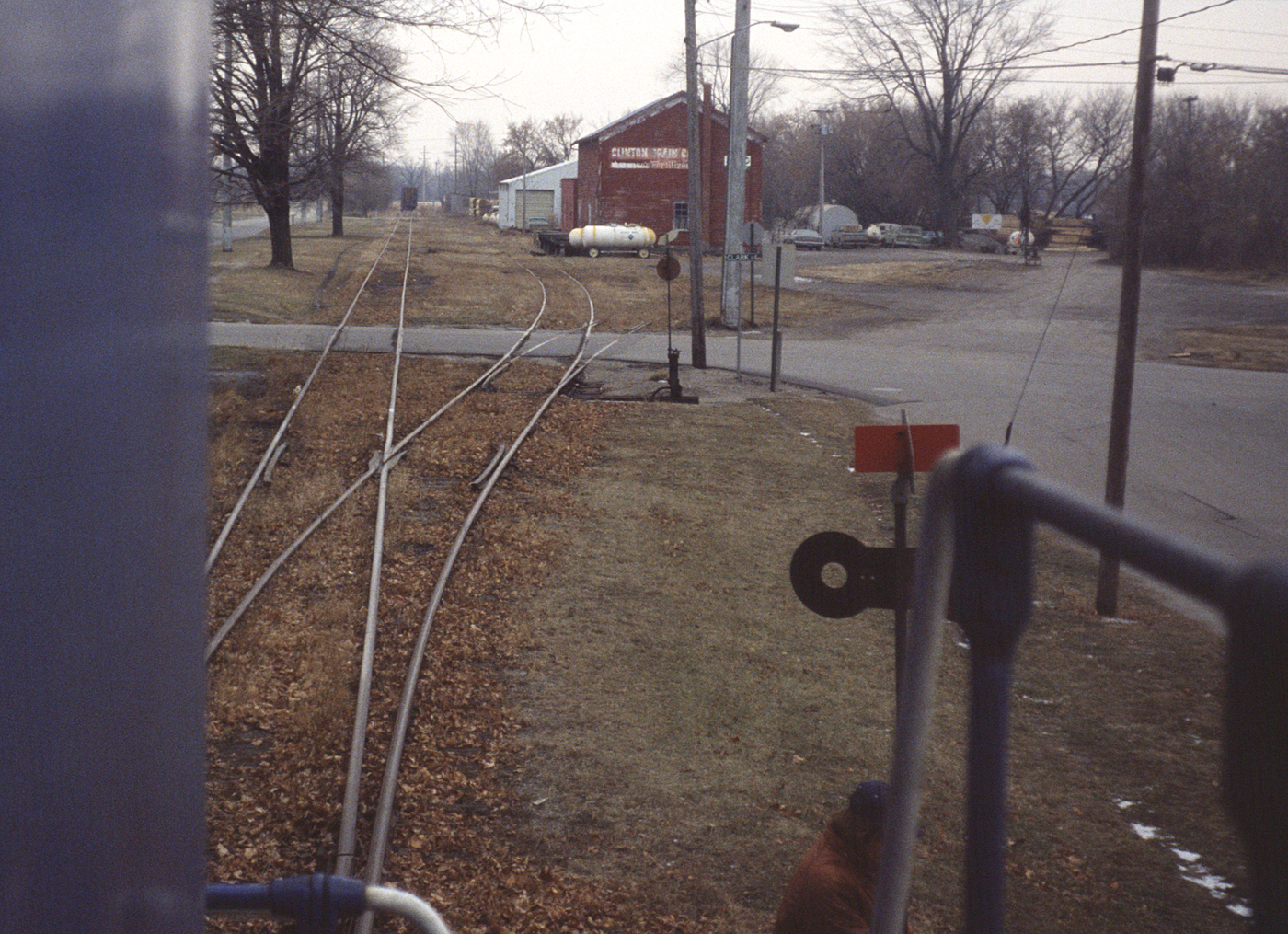 Running around some cars at Clinton, Michigan on 23 December 1980. This yard is the home today of the Southern Michigan Railroad Society. 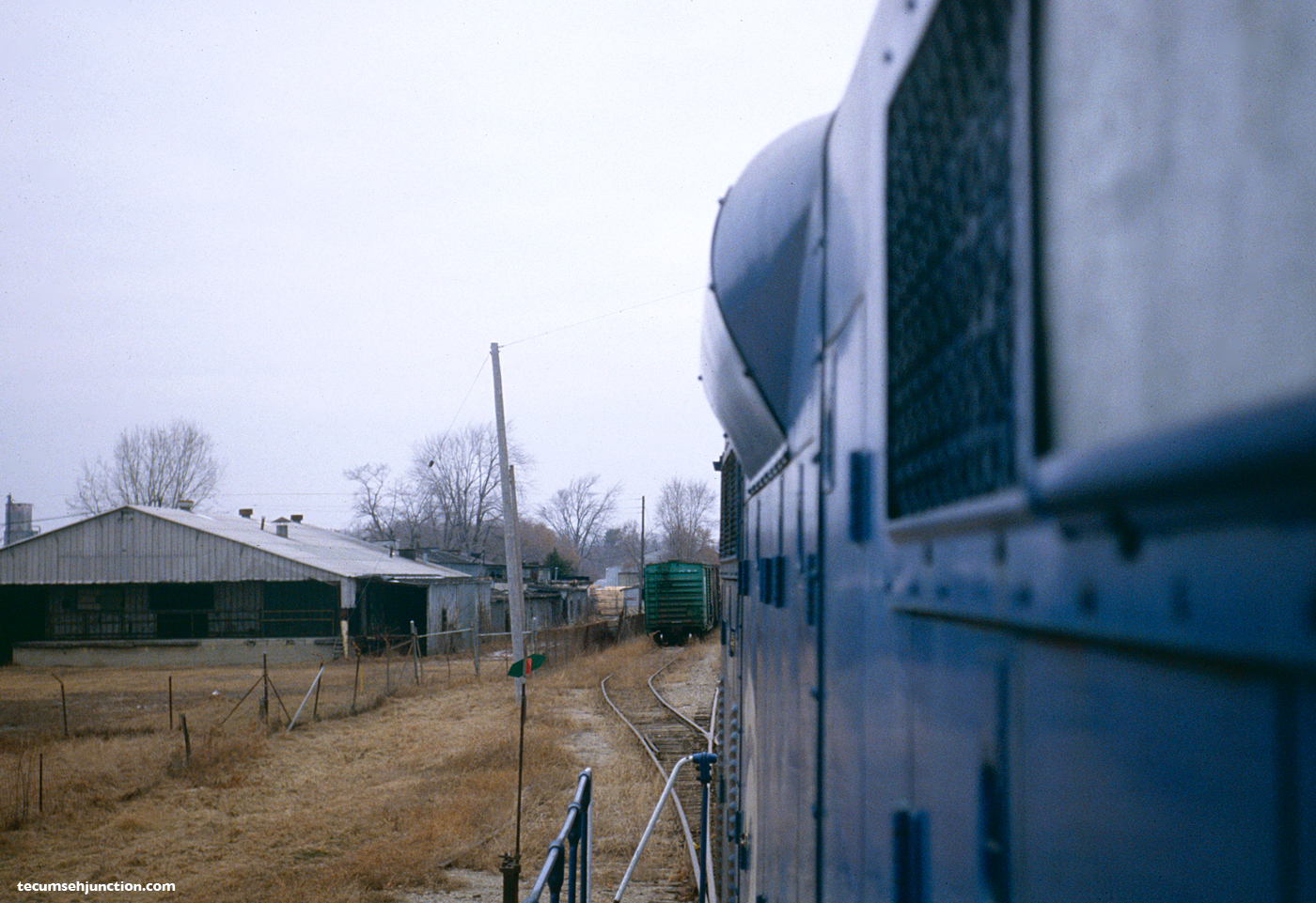 Switching cars at Clinton, Michigan on 23 December 1980. The building to the left once belonged to the Clinton Engine Company.

By the late 1960s the line had been cut back to Clinton and became known as the Clinton Secondary Track. The most important customer by that time was the Budd Company plant at Clinton that made brake and wheel castings for an American Motors plant in Kenosha, Wisconsin. The Budd plant was entire dependent on the railroad, receiving castings by rail and shipping out the finished assemblies by rail.

By the late 1960s, I realized that the railroad wasn’t going to be around forever and began photographing it. I would usually park my car on Brown Street at the north edge of Tecumseh, and walk north on the line to pick out a good spot for a picture.

At first the crew seemed very suspicious of me when I would take a photo of their train. They thought I was a “weed weasel”. That was what they called the inspectors from the Federal Railroad Administration. who would check them out to make sure they were following proper procedures on the line. They were known to sometimes disguise themselves as a railfan, complete with cameras. But after a while the crew realized I was just a harmless railroad nut.

One day after I took a picture the train stopped, and Dale Stultz, the engineer, leaned out the window and asked: “do you want to ride?”.

It took me all of a millisecond to say yes, and I climbed into the cab and was welcomed by Dale, and fireman Walt Lerch. We were heading south and when we reached Brown Street I said to Dale “I’ll have to get off because my car is parked here.”

“No you don’t have to,” he said. “Just give your car keys to the brakeman here, and he’ll drive it down to Blissfield. That’s where we stop for dinner at the Town Pump.” 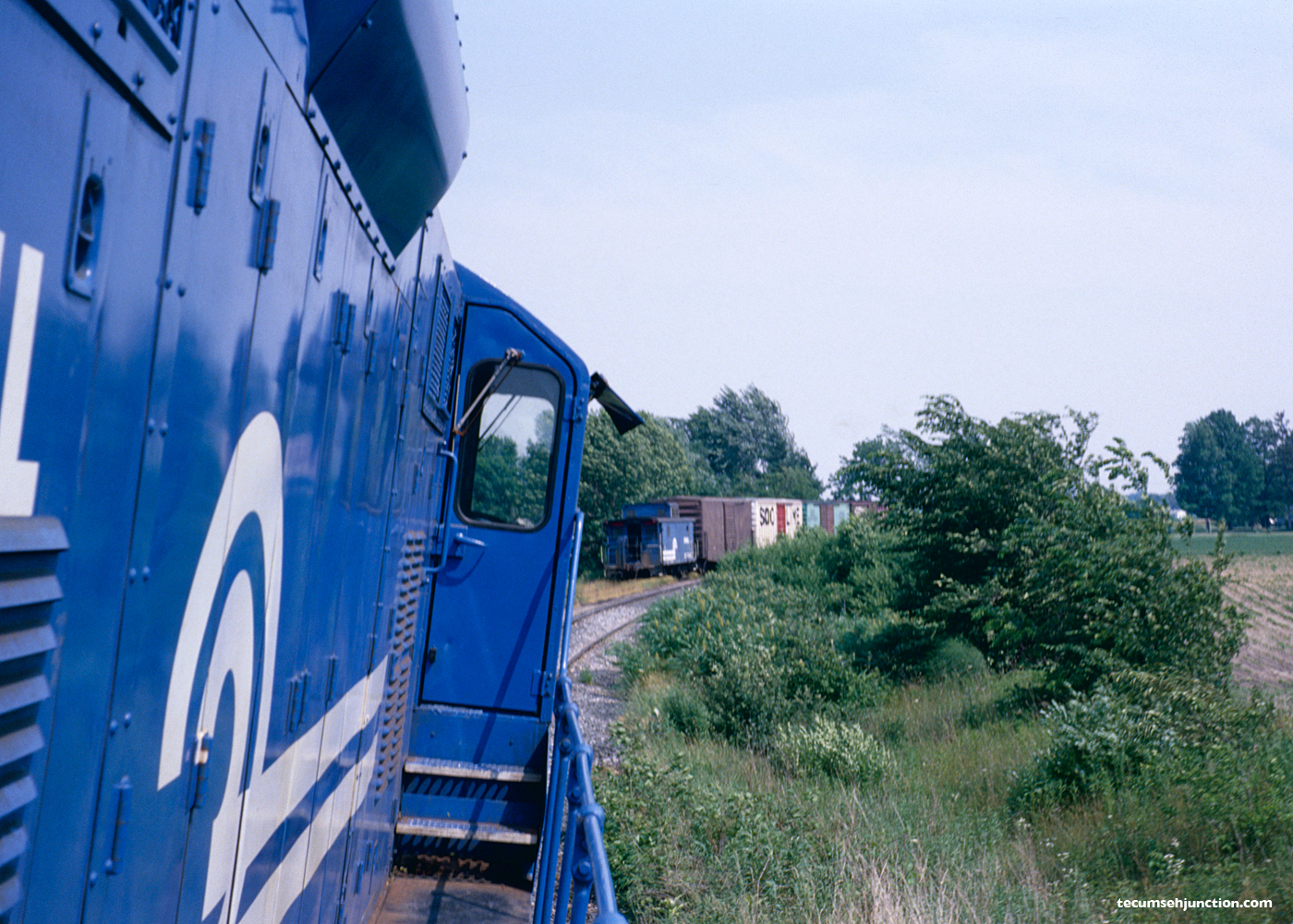 Having left its train on the east leg of the wye, the CSR-1 backs down to the Lenawee County Railroad interchange track at Lenawee Jct., MI on 26 June 1979. 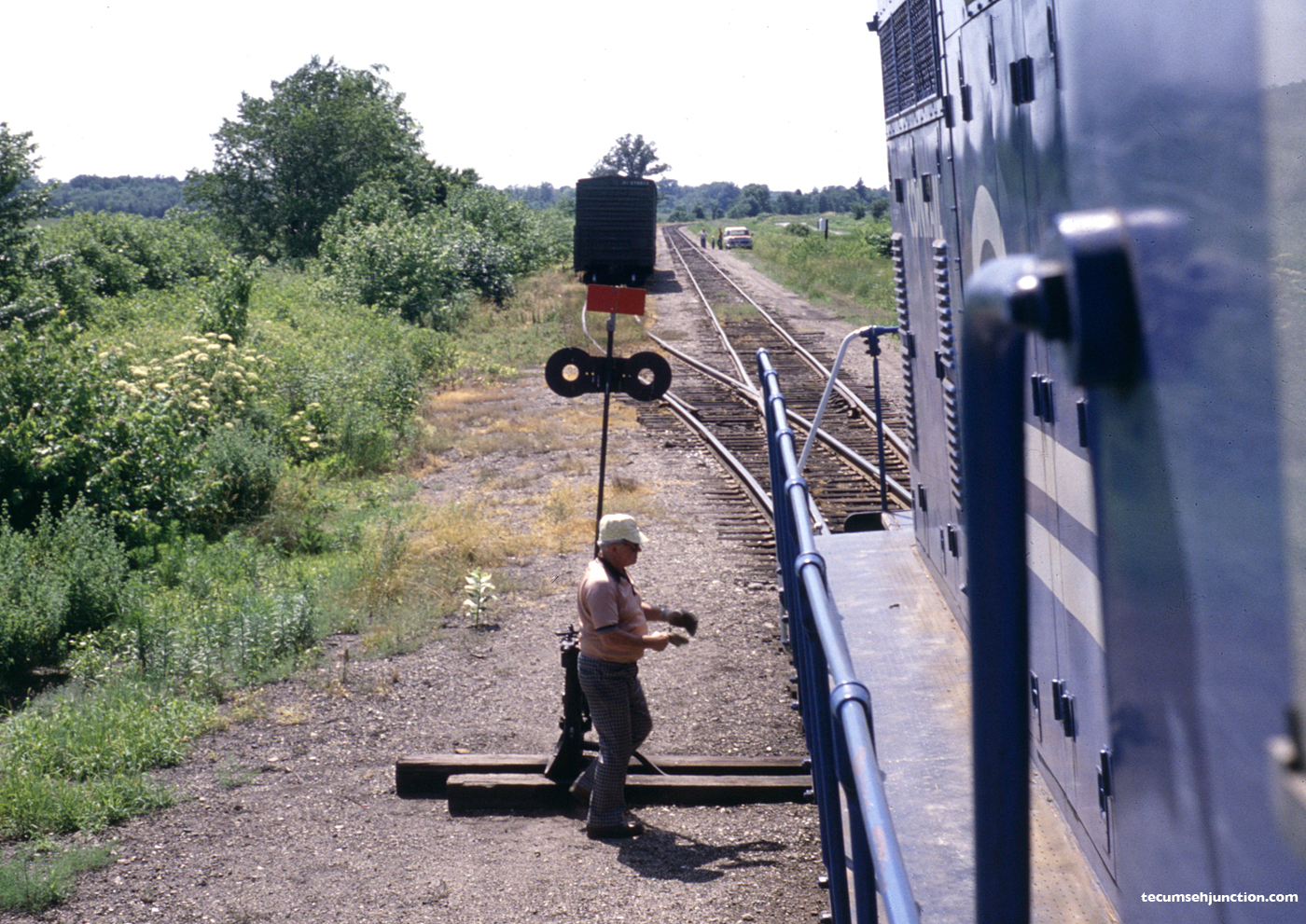 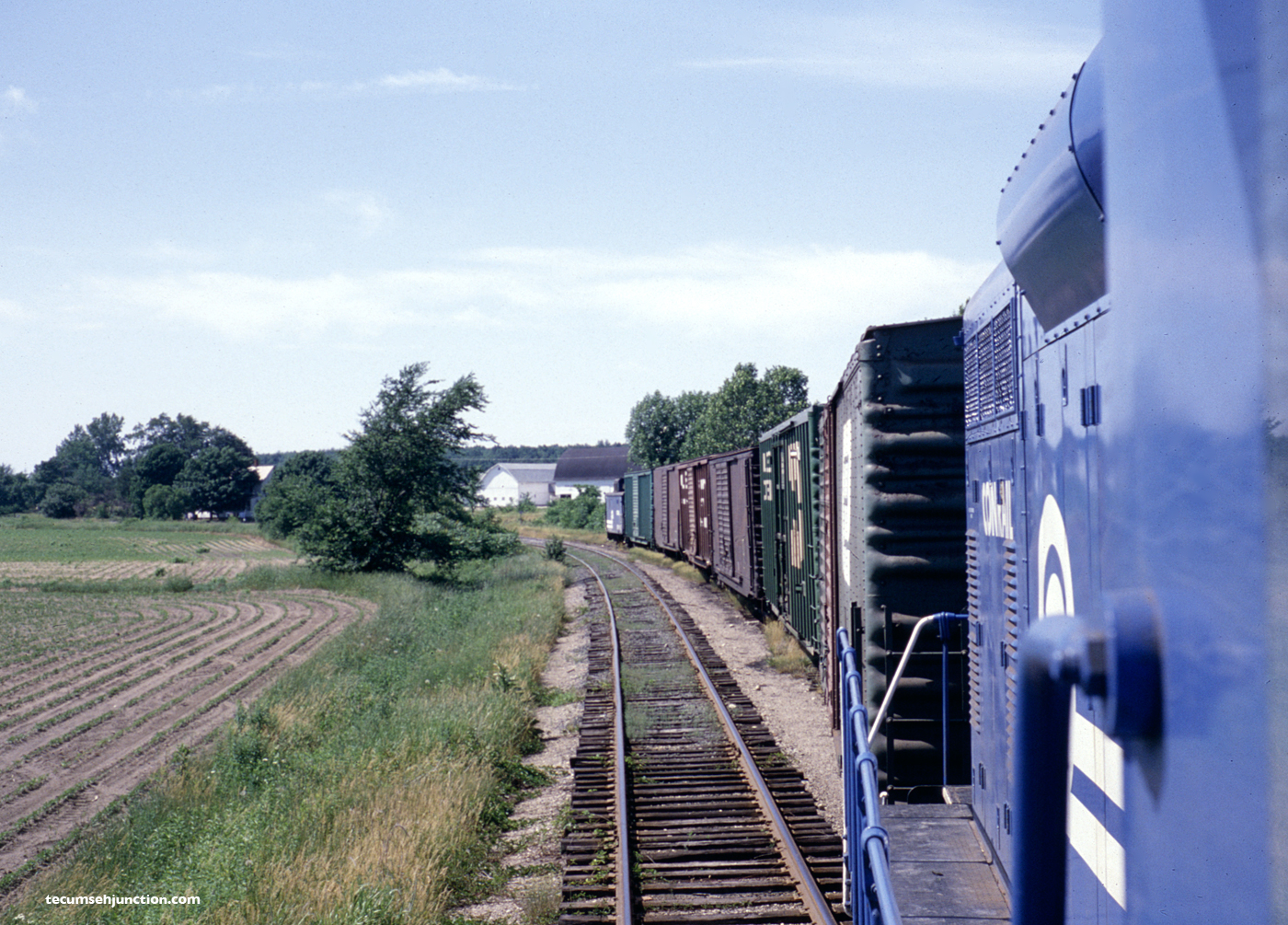 With the train back together, the CSR-1 departs from Lenawee Jct., MI on 26 June 1979, heading for Blissfield. 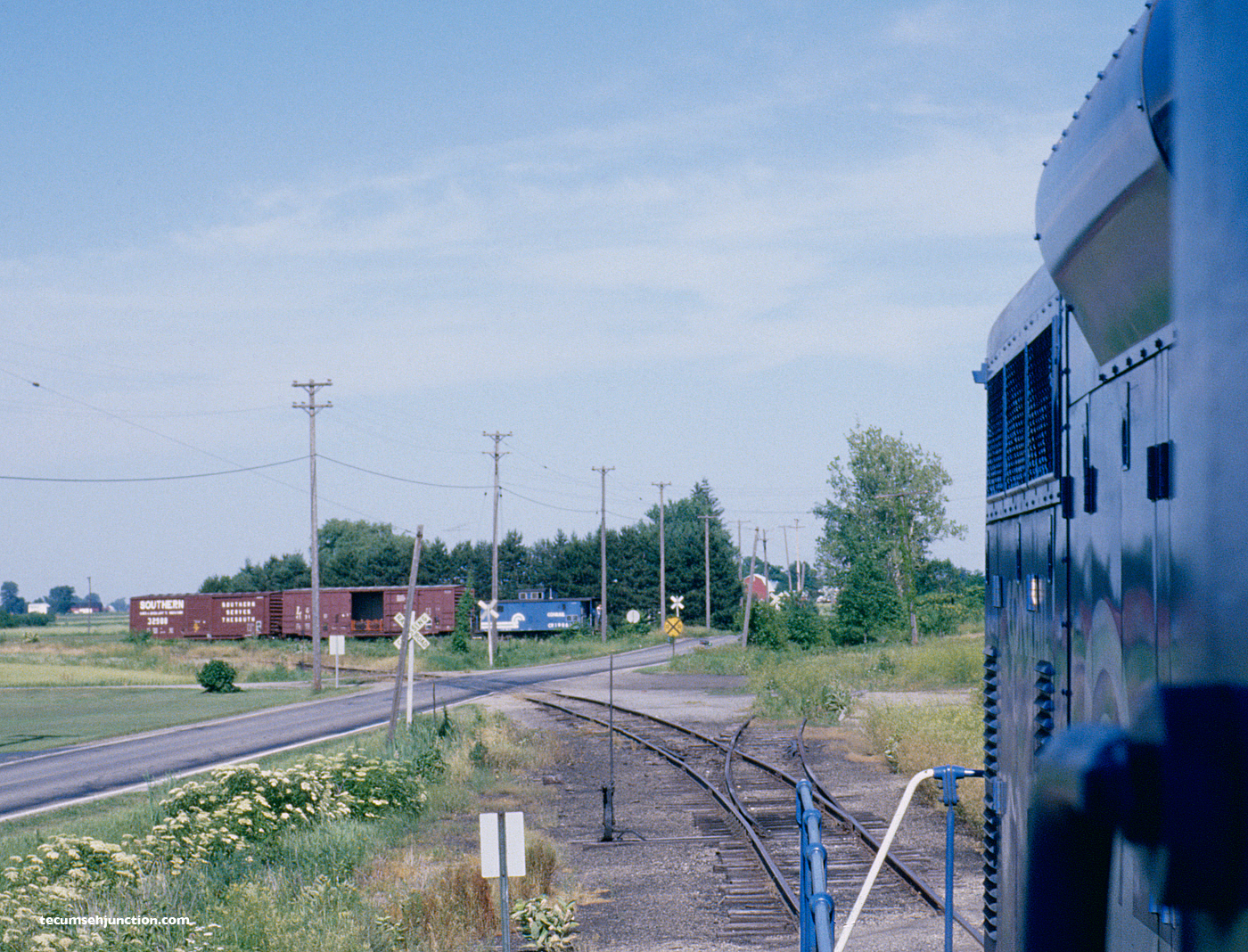 Returning to Clinton later the same day, the northbound CSR-1 interchanges with the LCRC at Lenawee Jct., MI on 26 June 1979, this time using the west leg of the wye. The track from the switch leading to the right was once the Penn Central’s Ida Branch.

So that’s what happened. They did some switching in Tecumseh and picked up some cars from the Lenawee County Railroad at Lenawee Junction. The brakeman got to the Town Pump in Blissfield long before we did and was working on his third cup of coffee and flirting with the waitresses by the time we got there.

This became a regular routine for me—take a photo somewhere along the line, climb into the loco cab with Dale and regular fireman Walt Lerch, ride to Blissfield and drive home. Both were senior railroaders and had started their employment with the New York Central. One day, though, when they stopped they told me that there was a rumor of a weed weasel somewhere along the line and they had to “go by the book”.

I wasn’t the only one they would pick up along the track. There were often 2 or 3 others aboard. One day there was a man and his young son in the cab, and 5 or 6 others in the caboose. Conrail was providing free transportation on that line and didn’t know a thing about it! 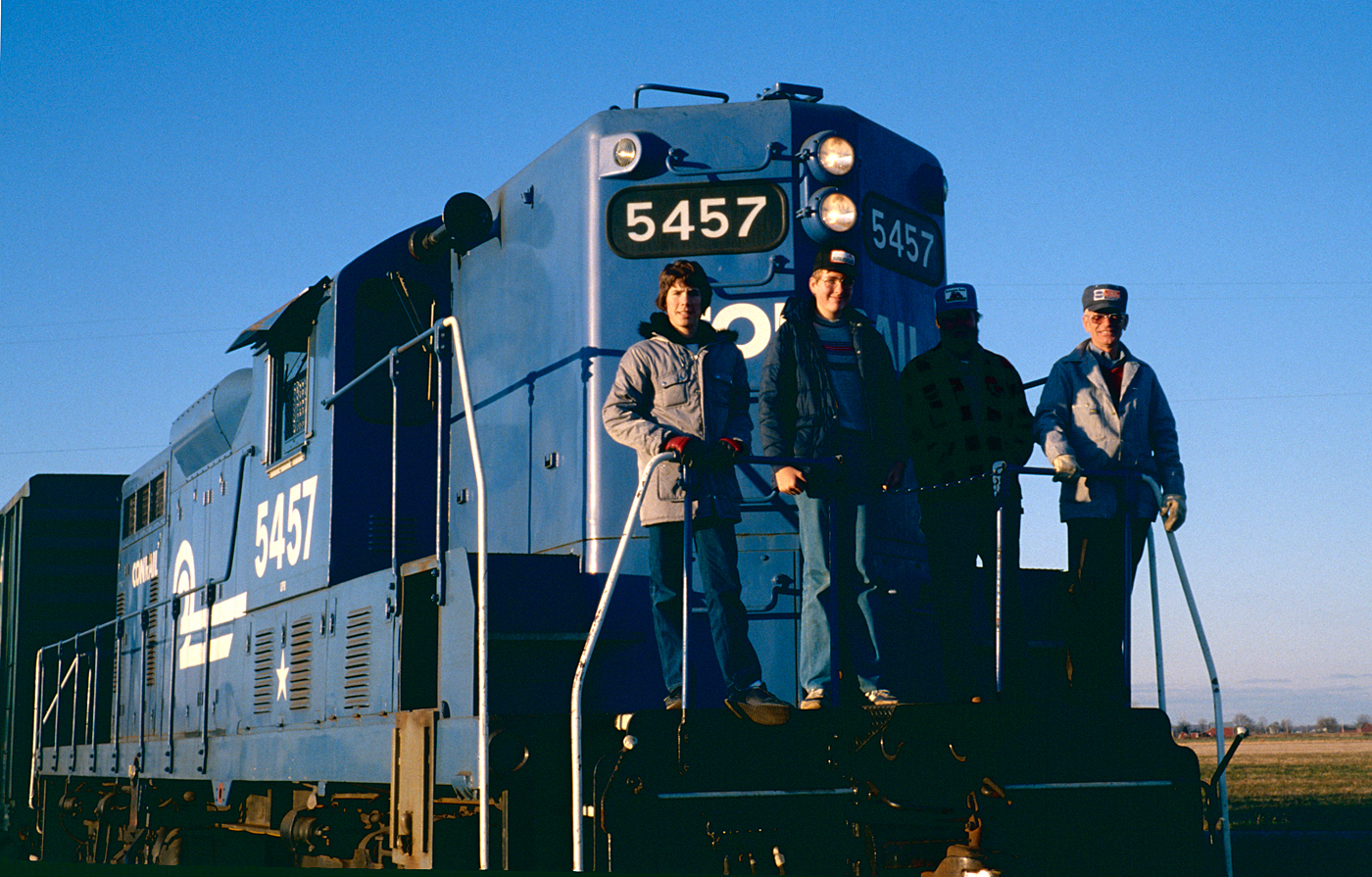 The crew had a lot of great stories, but I think the following is one is the best.

One day the northbound train arrived in Tecumseh about noon as usual, and the crew stopped for lunch. However, Dale, the engineer, decided to skip lunch and do some shopping in downtown Tecumseh. They all agreed to be back at the train by 1 p.m.

Dale arrived back a few minutes after 1 p.m., and assuming the rest of the crew was in the caboose, climbed into the cab, released the brakes, notched the throttle and departed for Clinton.

So, he put the locomotive in reverse and backed the train the 5 miles to Tecumseh, where the crew was wandering around downtown trying to figure out who had stolen their train. They eventually made it back to the Budd plant and completed their switching.

Thanks for the memories Dale and Walt!:

Editor’s note: Ed Hodges wrote this article especially for the blog last year. He passed away on January 12th of this year. 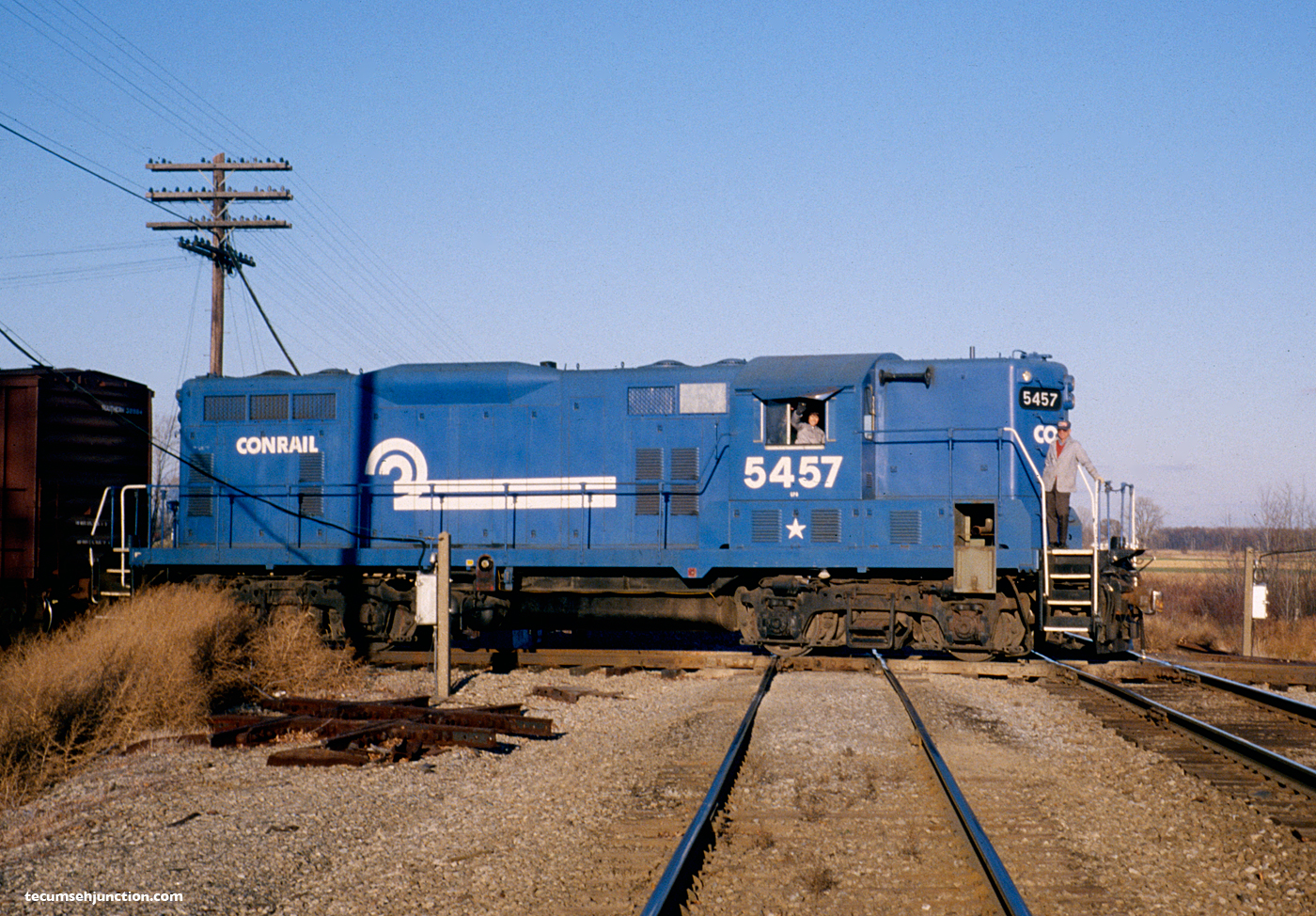 Conrail GP-8 #5457 leads the southbound CSR-1 over the Norfolk and Western Railway diamonds at Raisin Center, MI on 10 November 1980. Ever the ham, Dale Stultz has left the engineer’s seat come out for a quick “on the move” photo opportunity as the train clatters across the crossing of N&W’s Detroit-St. Louis main line. 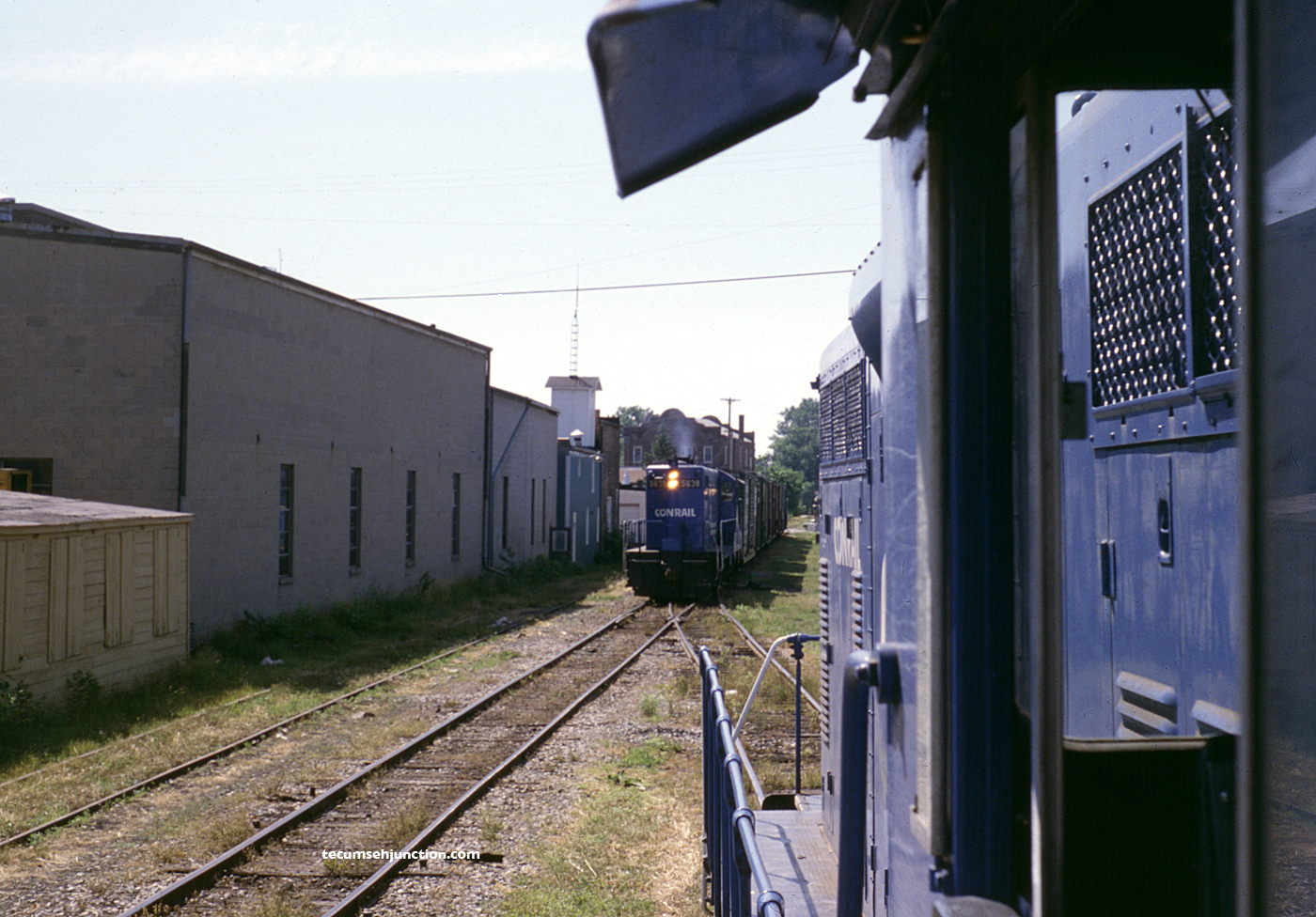 At Blissfield, MI a local train has come from Toledo to interchange cars with the CSR-1. Conrail #5638 is seen here making a move on the main track, while the Clinton train waits in the siding. 26 June 1979 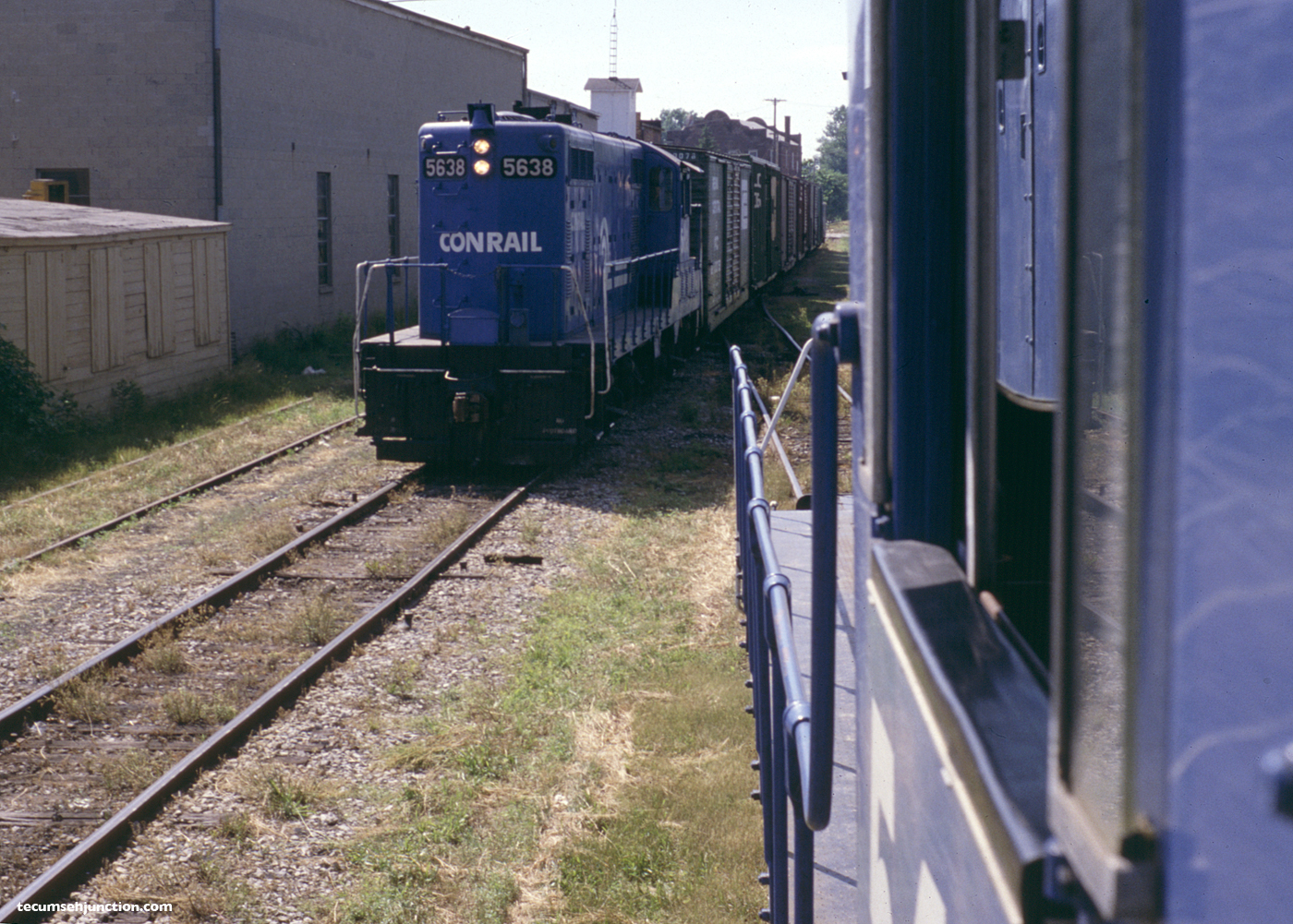 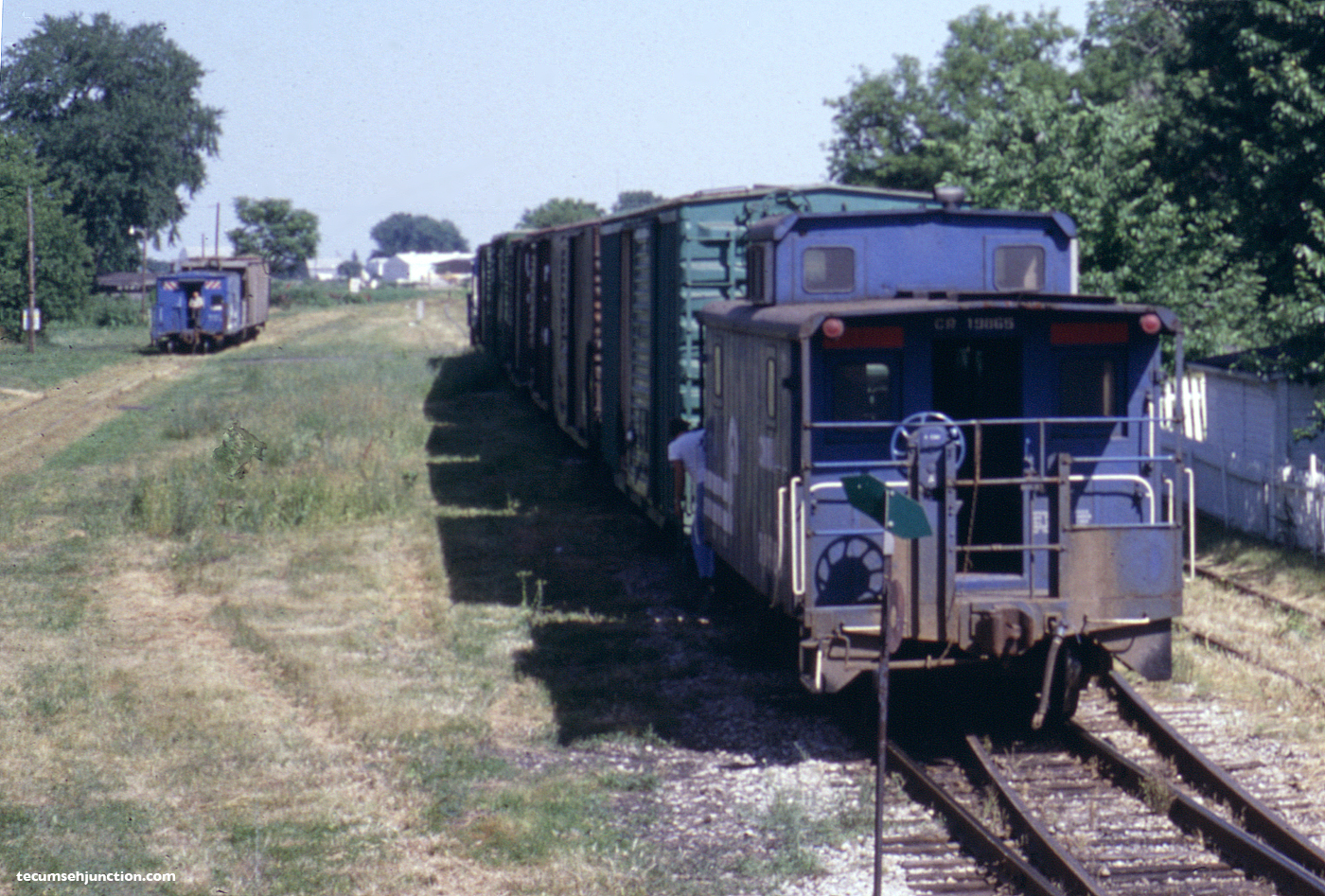 The train from Toledo has a transfer-style caboose, whereas the Clinton train carries Conrail caboose #19865, a cupola-style car originally from the New Haven Railroad. Blissfield, MI, 26 June 1979 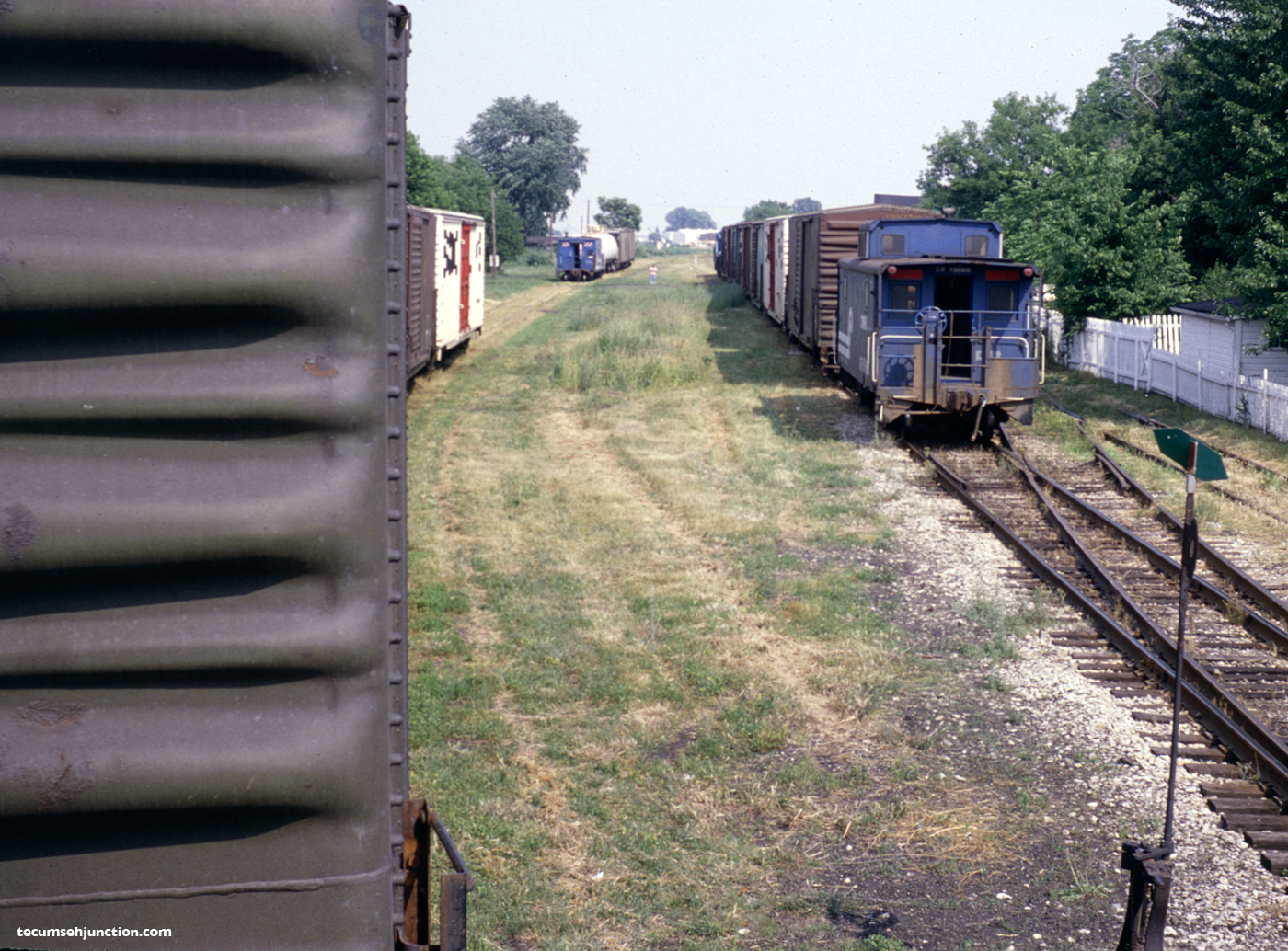 The Clinton train now makes a switch move at Blissfield, MI on 26 June 1979. 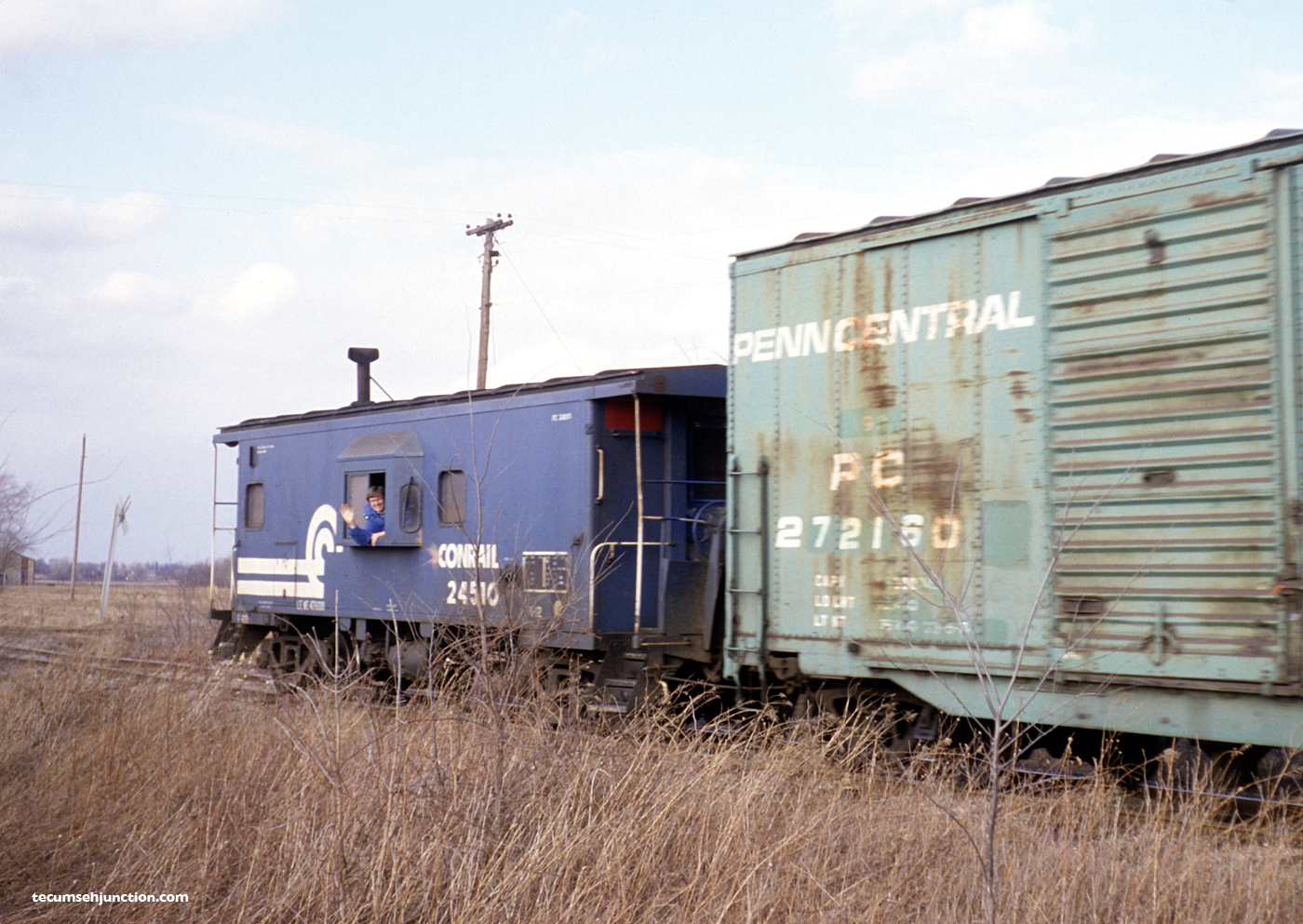 The author of this blog “rides the cushions” in Conrail caboose #24510, southbound at Palmyra, MI on 16 March 1981. Within a year, the Clinton Line would be closed. Thank you, Ed, for making this possible!