Trip to Poland—30 years ago

In the summer of 1990, Poland was a country entering a new era. The communist regime had been voted out the previous September, and many changes were underway as the country left the Soviet sphere and headed towards the European Union.

That summer I saw a photograph in Locomotive and Railway Preservation magazine with a photo of a steam locomotive in Kraków, and a letter providing information that Polish State Railways (PKP) was still running steam in several locations. About the same time, the airline American Trans Air was offering charter flights from Detroit to Warsaw at a reasonable price. So following discussions with my father as well as friend Mike Valentine, it was decided that a trip was in order.

The two-week trip took place in September 1990. We were based in the town of Czersk, where my Uncle Franek lived, and with whom we stayed. Czersk was a small rural town, and in terms of railway information, we were very much in the dark. In those days before the internet, there were no online sources. We only had a copy of a map with the places where steam was still working marked. However, we didn’t have a system timetable, and with no language ability we couldn’t find timetable information to undertake any longer trips!

So our trip was constrained to short rides around Czersk, with the exception of a trip to Kraków and back to ride a steam train, which we missed! Fortunately, one of the places marked on the map of steam activity was Kościerzyna, a short distance from Czersk, and we did manage to get there and see some steam.

The 1990 trip was a wonderful introduction to the country, at a time when the transition between old and new was just starting. Unfortunately, the changes would quickly sweep away most of the steam locomotives, and later many rural passenger services would be lost. It was the start of a transition for me, personally, as well. I started visiting Poland every summer through the 90s, and by 1999 I had found a job here and moved from the USA. I have now spent over 20 years in Poland.

The gallery below shows some of the more interesting things I saw in 1990. I hope you enjoy. PKP SP45-116 arrives at Czersk, Poland with a eastbound Chojnice-Tczew train on 07 September 1990.

A horse-drawn cart turns off the main street in Czersk, Poland on 07 September 1990. At this time, such sights were still common in Poland. 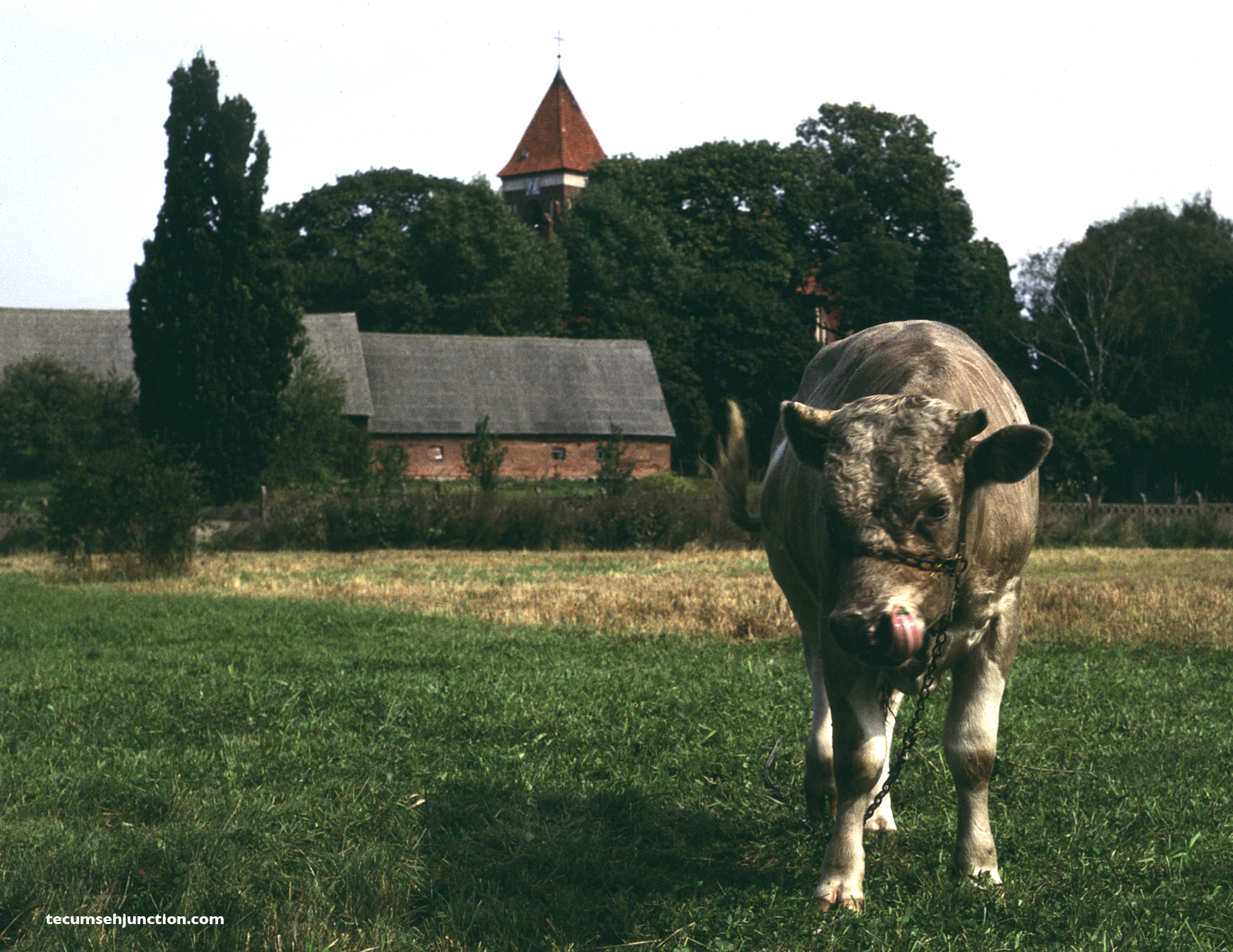 A bull grazes in a field on the outskirts of Czersk, Poland on 07 September 1990. The tower of the town church can be seen beyond the trees. 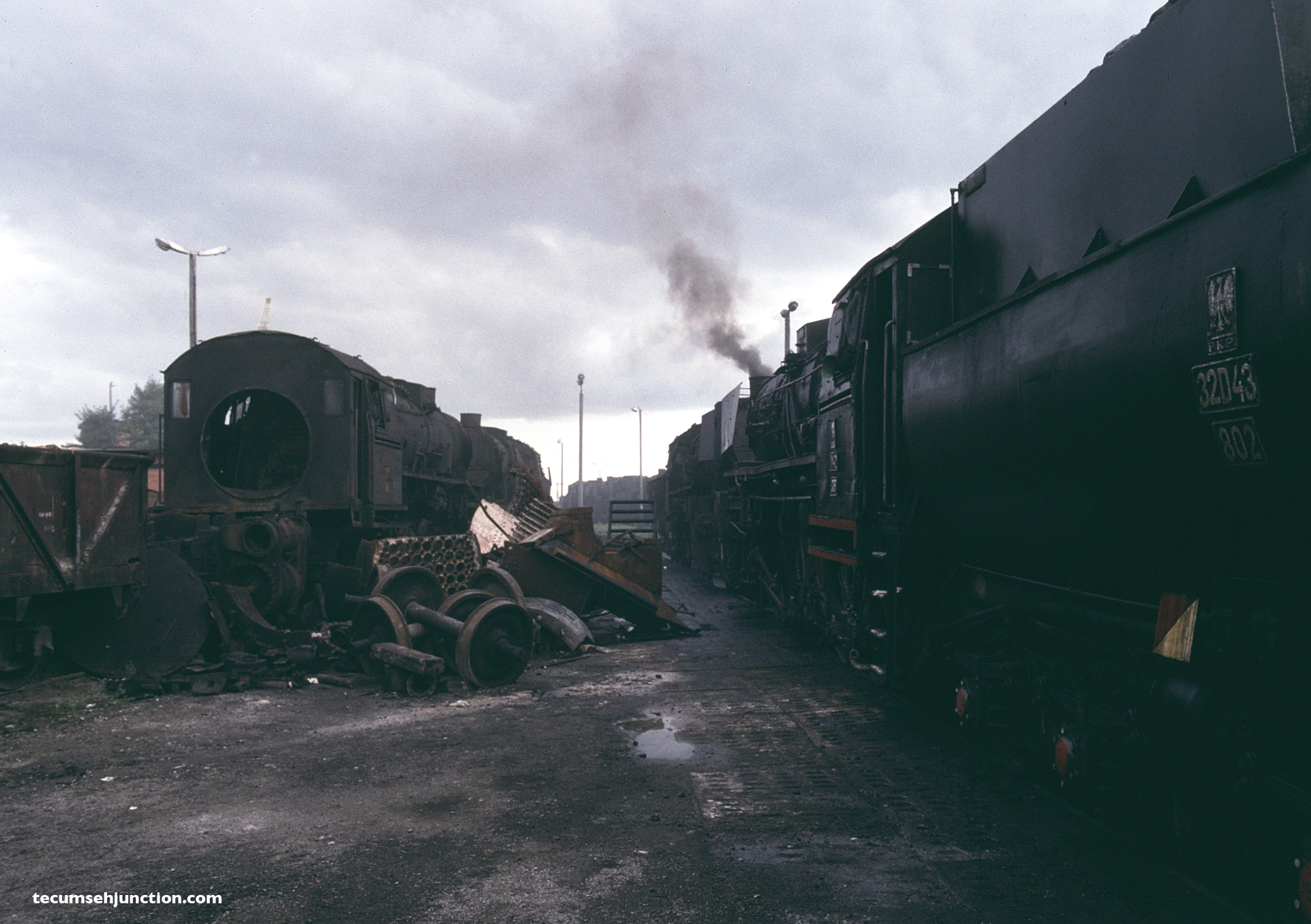 The town of Kościerzyna, Poland was marked on our map as having active steam locomotives. A trip there on 06 September 1990 found at least one locomotive as under steam at the shed. Numerous other locomotives were lined up to be scrapped. 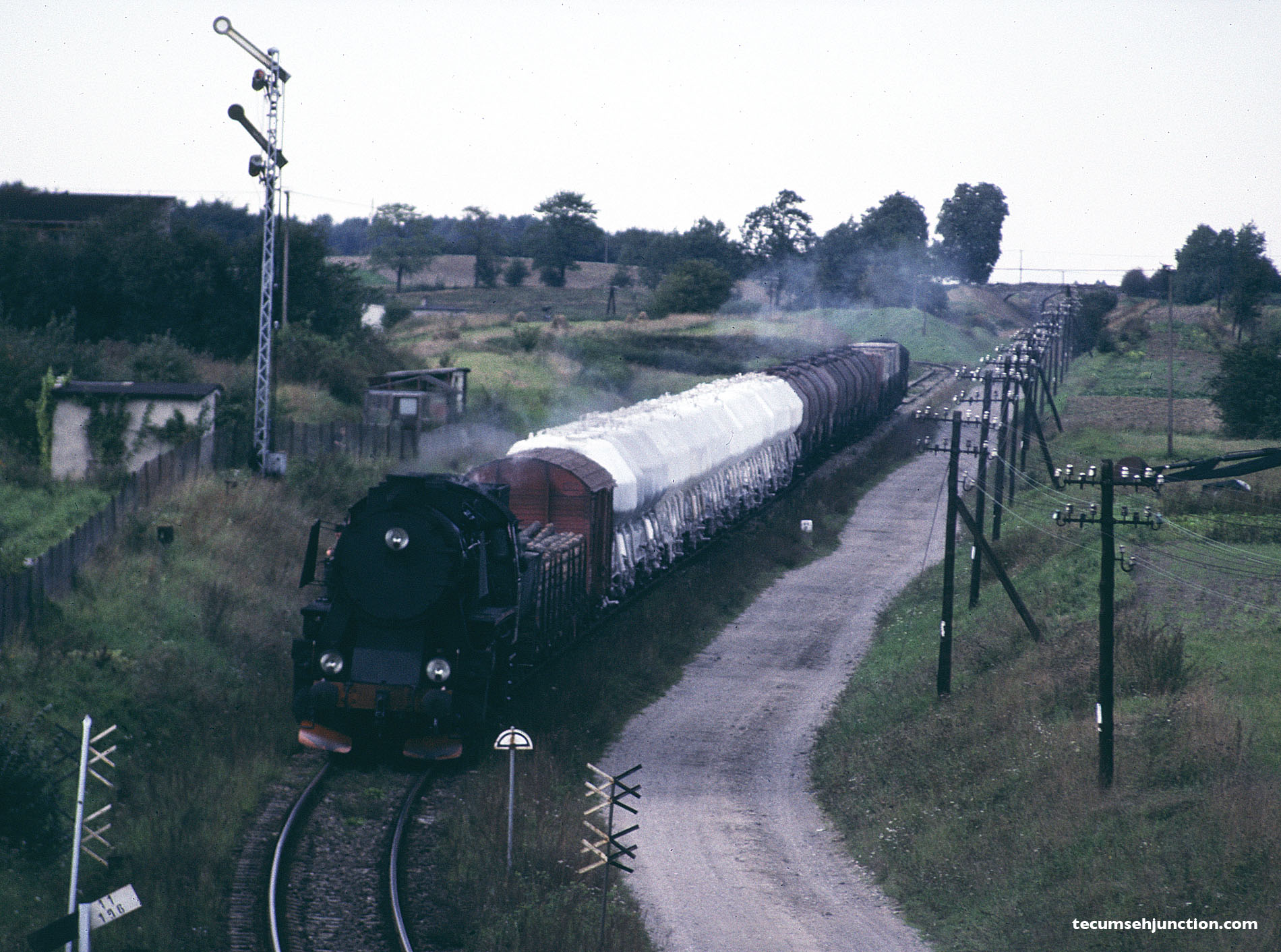 A PKP Ty2 or Ty42 arrives at Kościerzyna, Poland with a train from Lipusz on 06 September 1990. Here it is passing the enter signal for the station. A short time after this we were arrested by the railway police on the station platform, but they soon let us go! 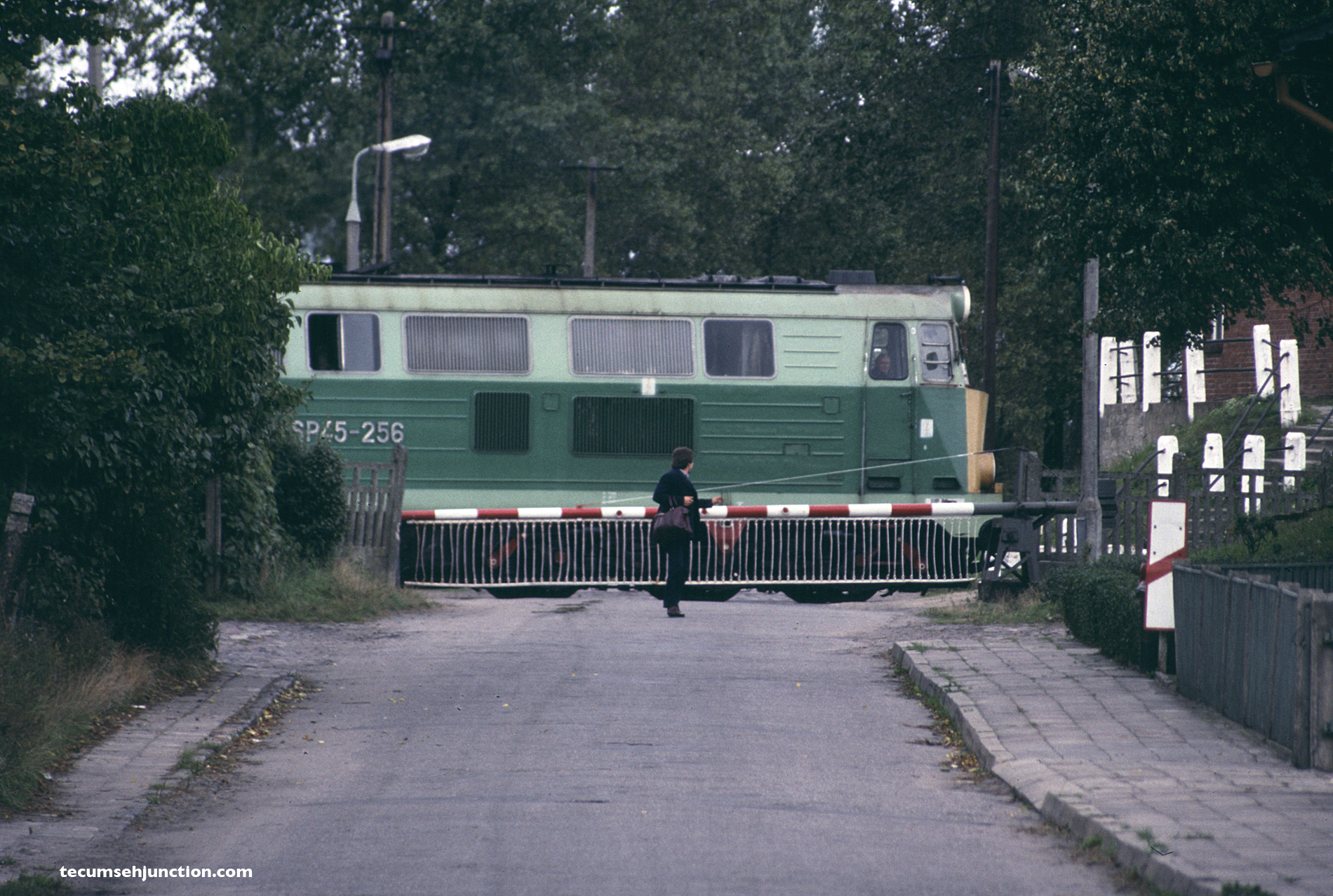 PKP SP45-256 leads an eastbound local train out of the station at Łąg, Poland on 09 September 1990. The crossing gate was controlled manually from the adjacent station. 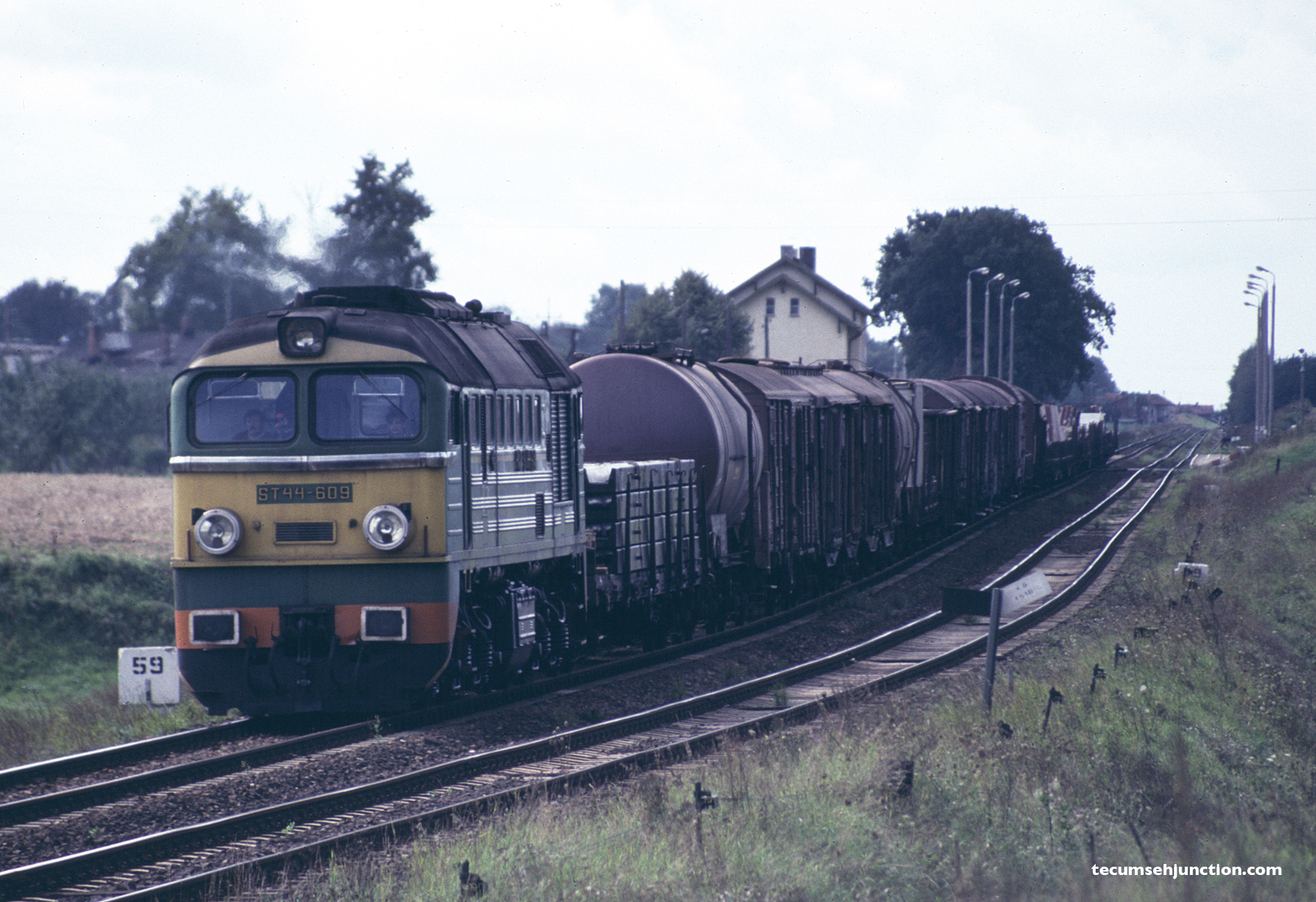 PKP ST44-609 passes the Łąg, Poland station with an eastbound freight working on 09 September 1990. The ST44 class locomotives were built in the USSR. Some remain in service today, but have been rebuilt with new engines. 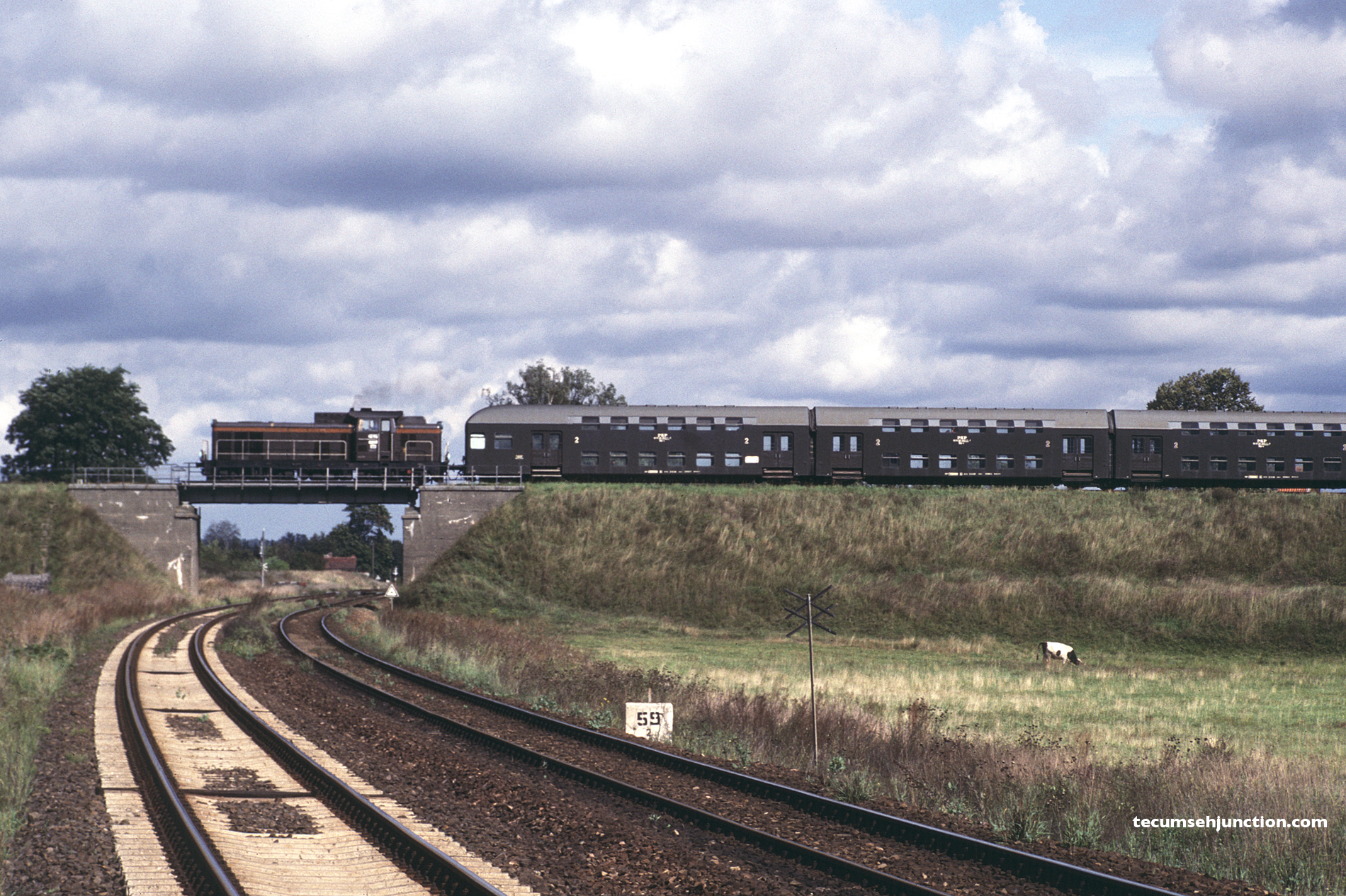 A PKP SP42-class locomotive leads a northbound Bydgoszcz-Gdynia local train over the “Ostbahn” (east/west line between Tczew and Chojnice), just east of Łąg on 09 September 1990. The train is travelling on the “Magistrala węglowa” (Coal main line), which was built between 1926 and 1933 to bring coal from the mines of Silesia to the new port at Gdynia. Today there are no passenger services on the “Magistrala” (nor are there any SP42s or double-deck wagon sets in service). 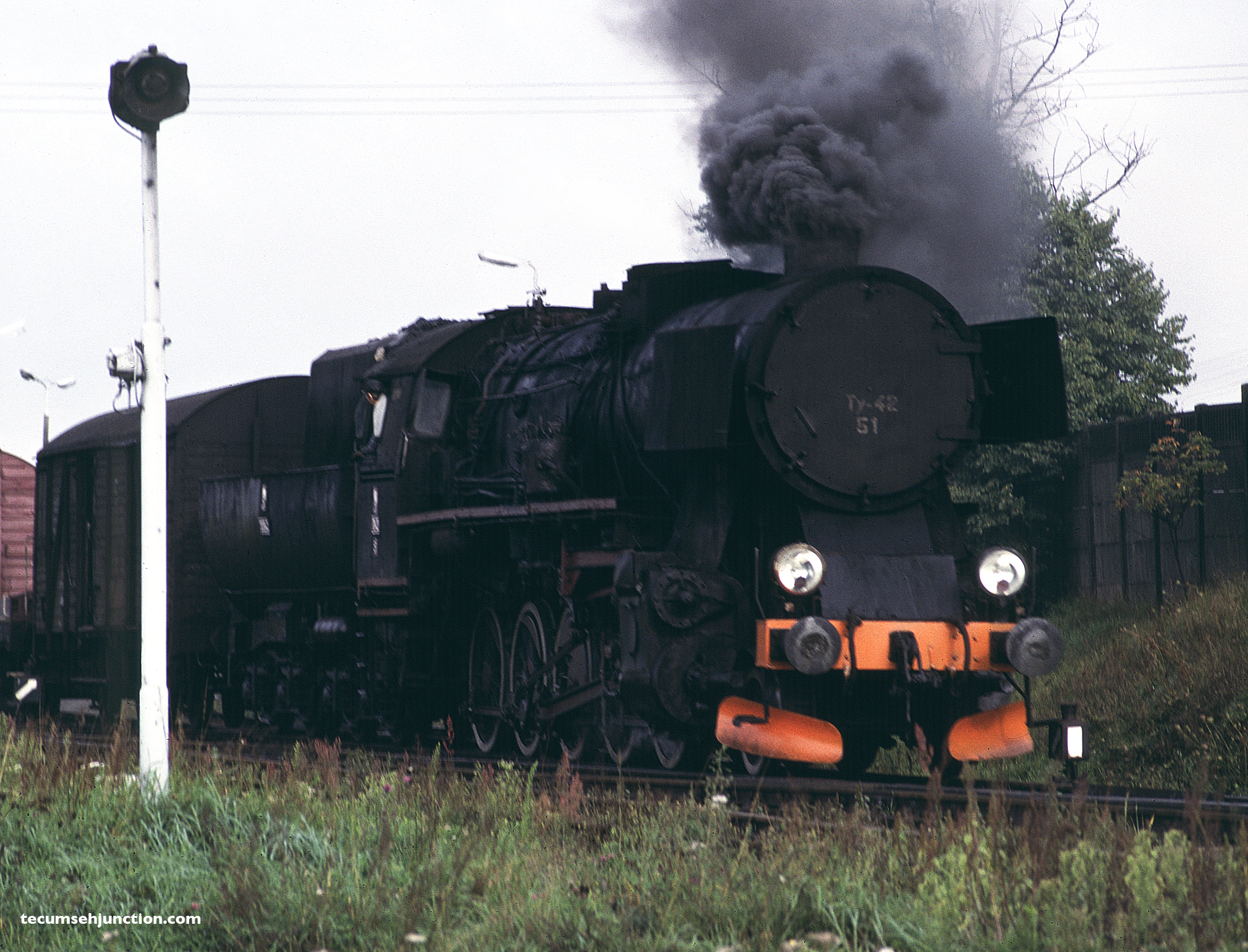 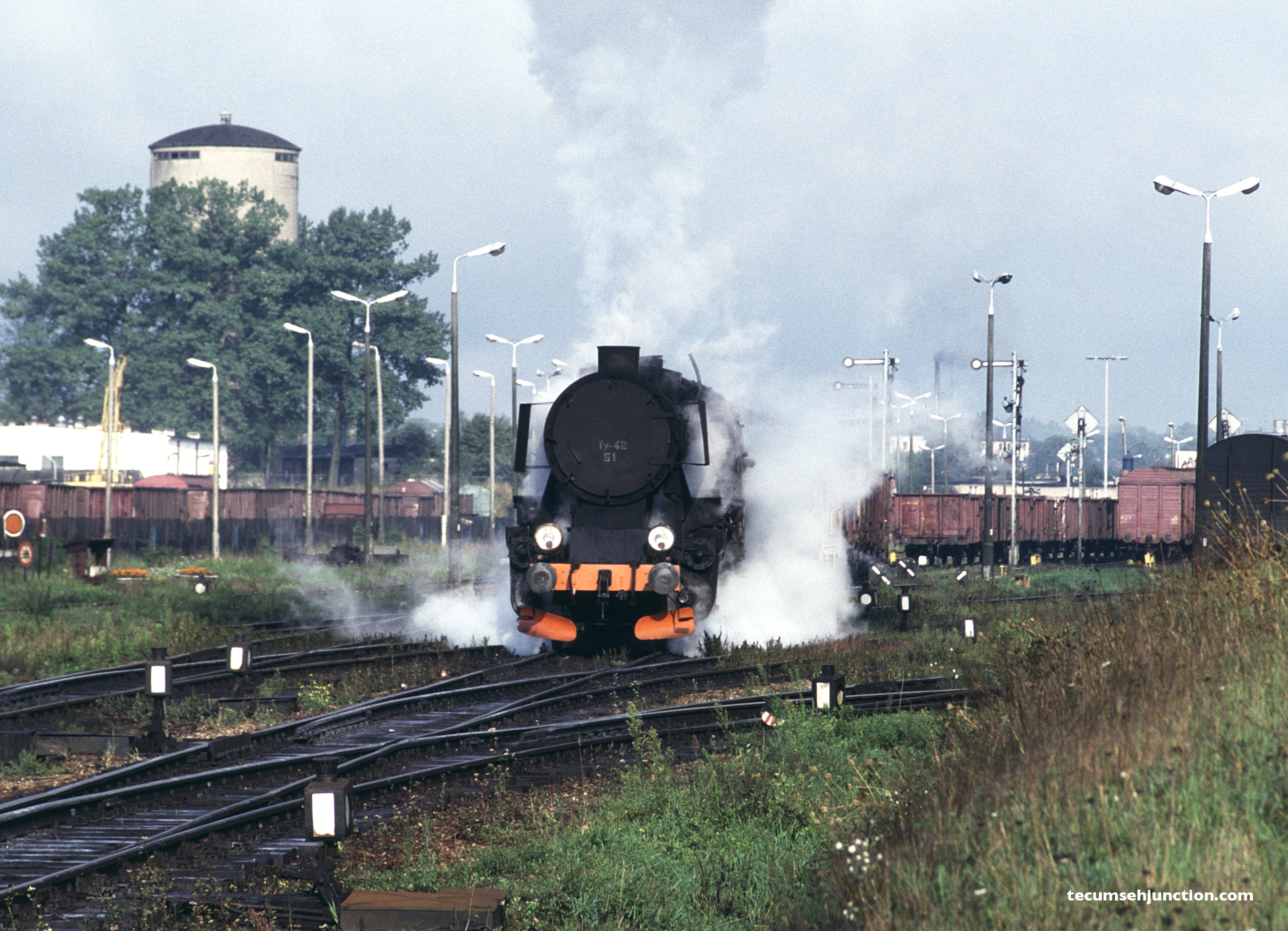 PKP Ty42-51 switches the yard at Kościerzyna on 10 September 1990. The steam depot was located just off to the right. 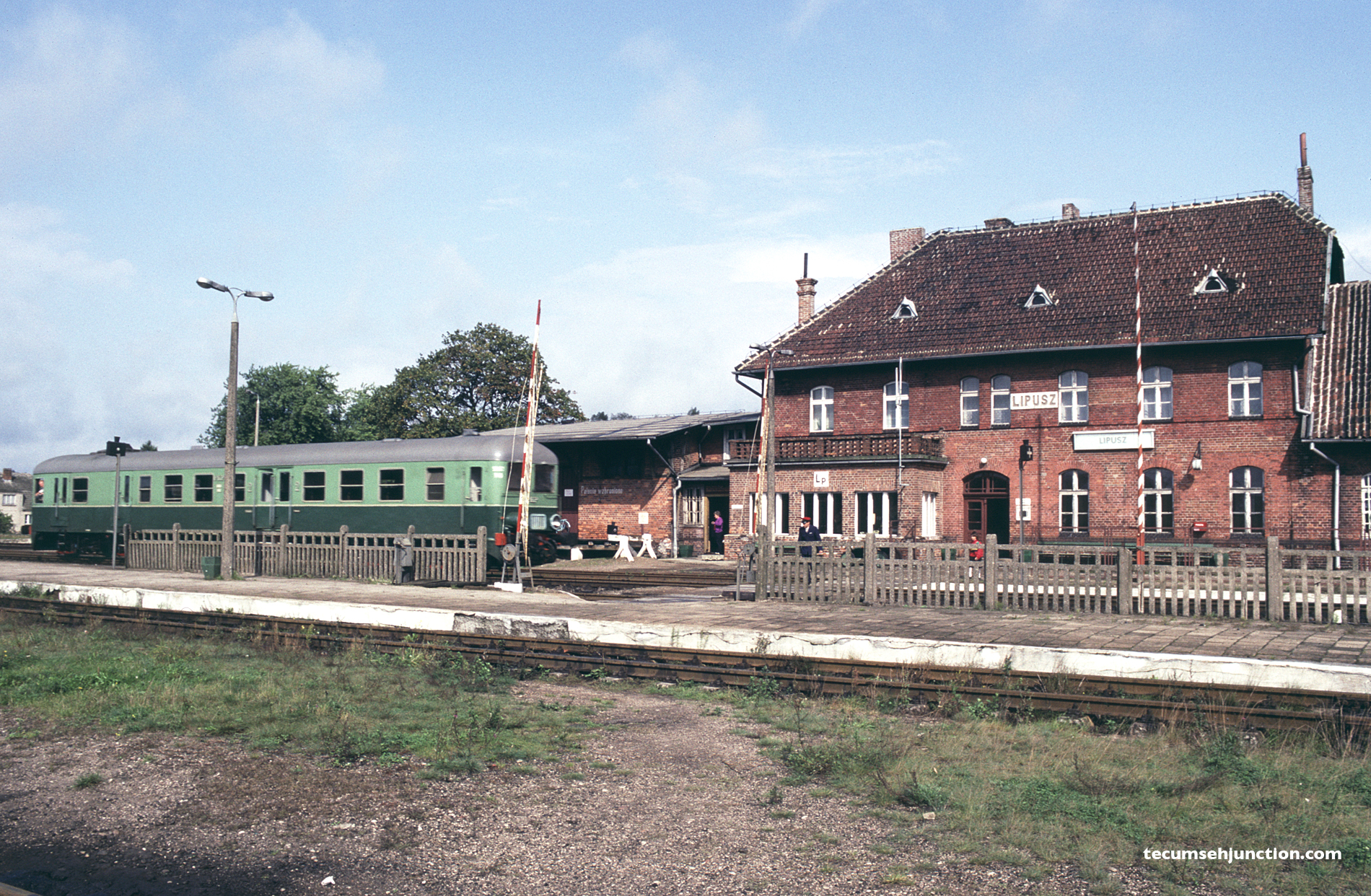 A solitary PKP SN61 rail car sits at the station in Lipusz, Poland on 10 September 1990, awaiting departure for Kościerzyna. It won’t wait long, as the stationmaster in his red hat is already on the way out to send off the departure. 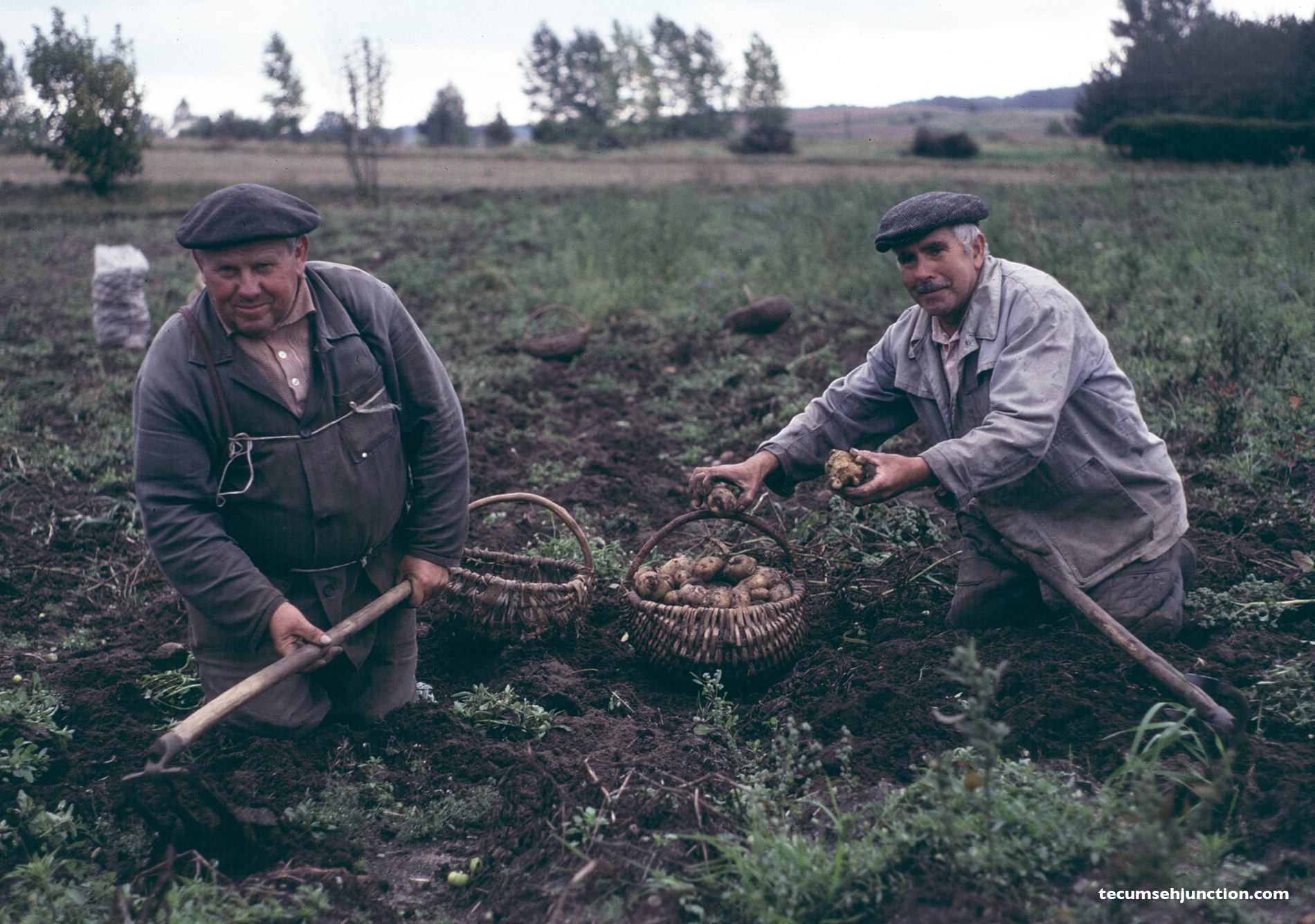 While waiting for the arrival of a steam train in Lipusz, we ran across these two farmers gathering potatoes. They happily posed for a portrait. (10 September 1990) 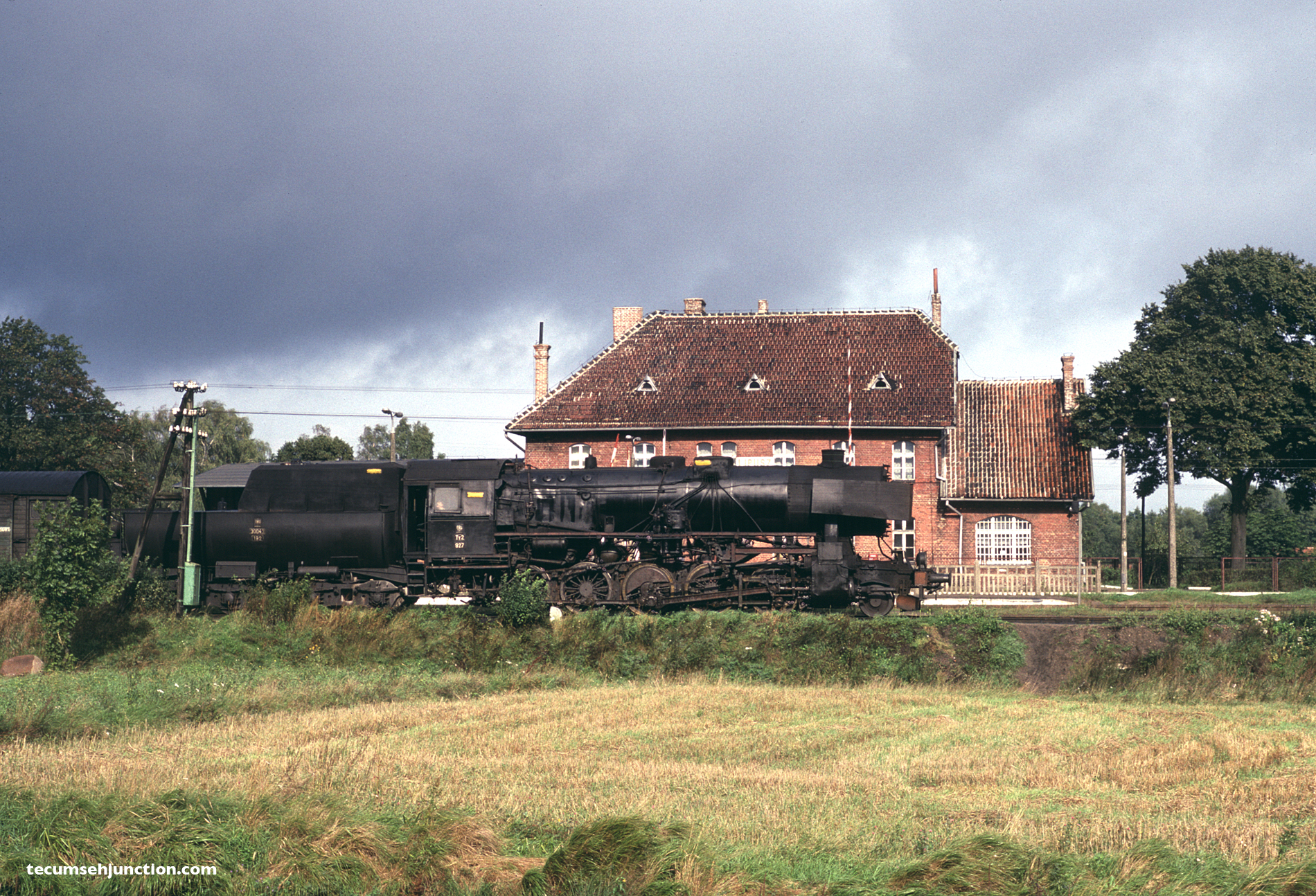 PKP Ty2-927 pauses at Lipusz, Poland on 10 September 1990. It had arrived on a train from Bytów, and after a break and running around its train, it will later depart for Kościerzyna. 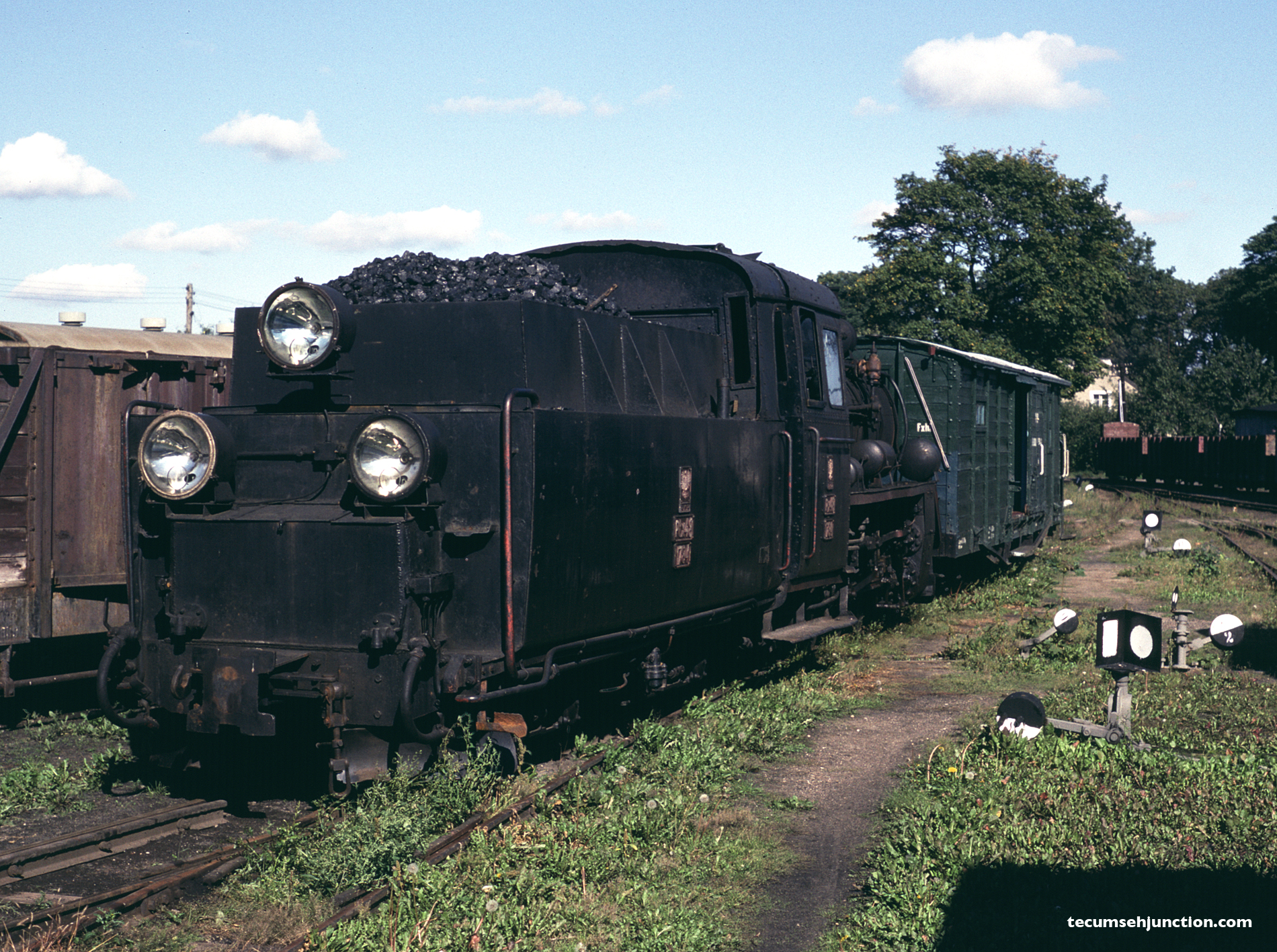 Returning from a trip to see Malbork castle, we stopped to see the narrow gauge shed at Lisewo, Poland. The place was dead, but we did find this Px48 showing signs of recent activity. (17 September 1990) 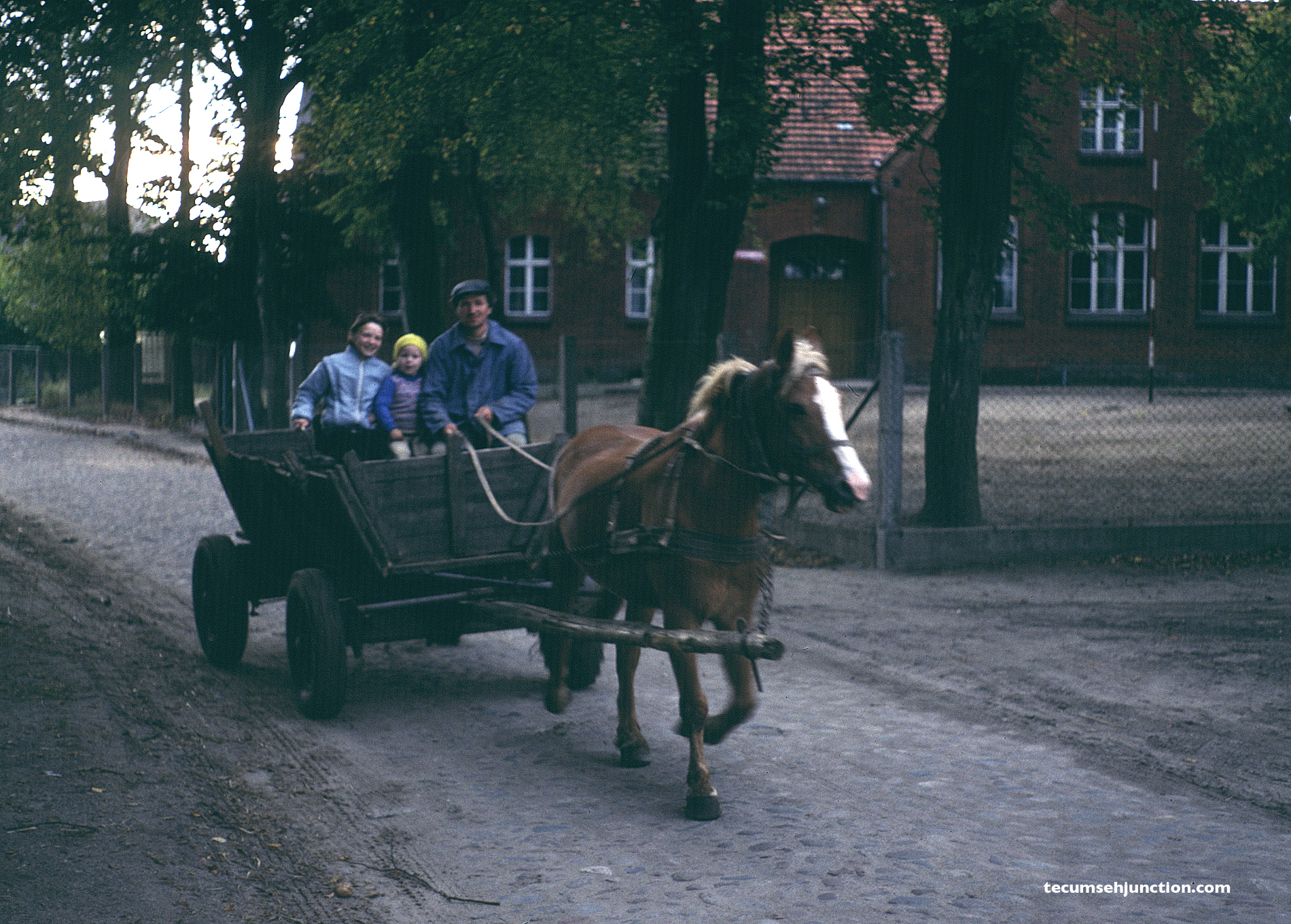 We also visited my father’s home village of Odry, Poland on 12 September 1990. Here a horse cart passes the school my father attended in the 1930s. 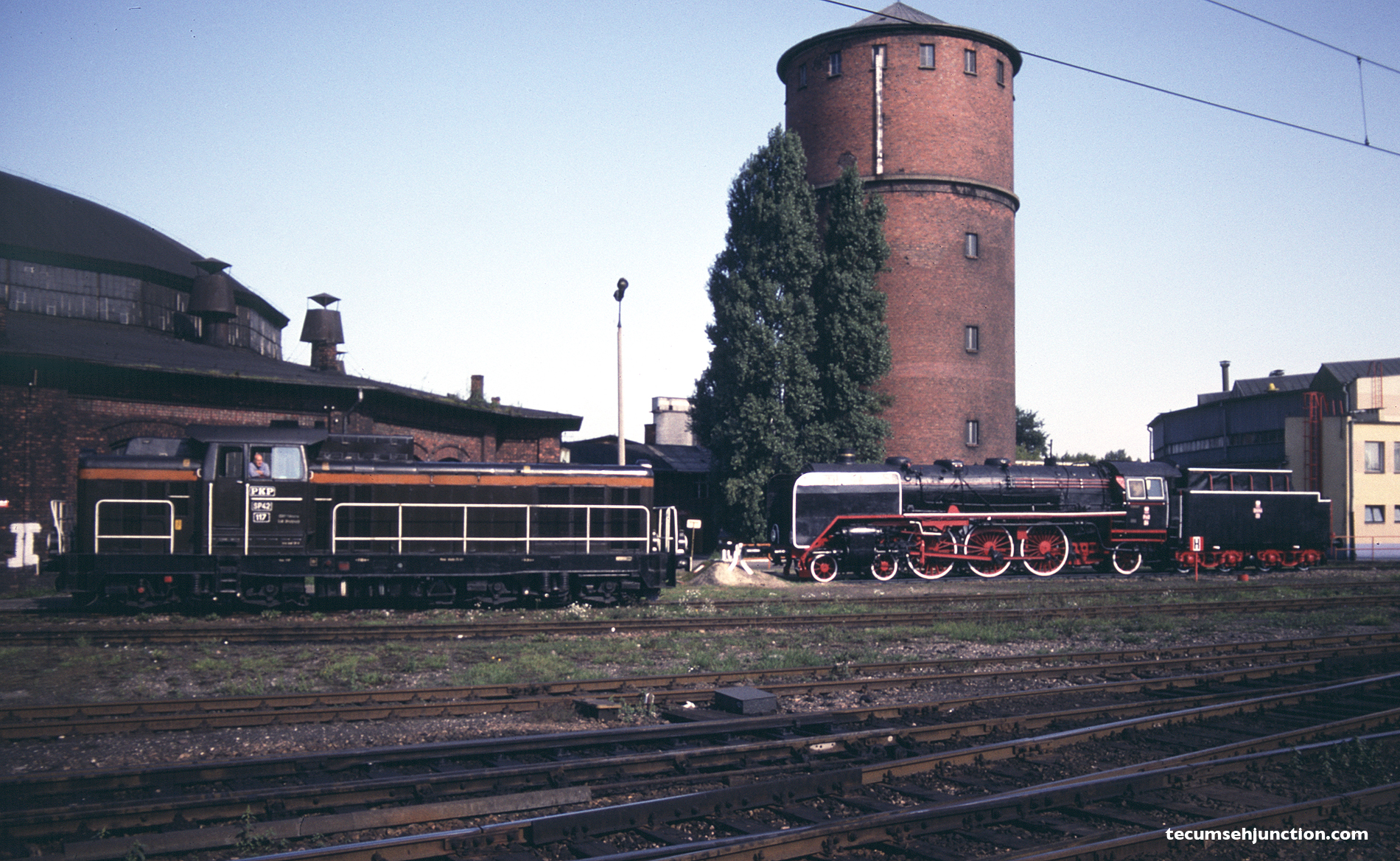 In the city of Bydgoszcz, a PKP SP42 locomotives leaves the depot, passing steamer Pm2-34, which had been cosmetically restored at the Bydgoszcz works. The Pm2 was retired in 1977 in Karsznice, where it served as a temporary boiler. It not resides in the Warsaw Railway Museum. The roundhouse and water tower seen here no longer exist. Little did I know at the time that 9 years later I would be living in Bydgoszcz! 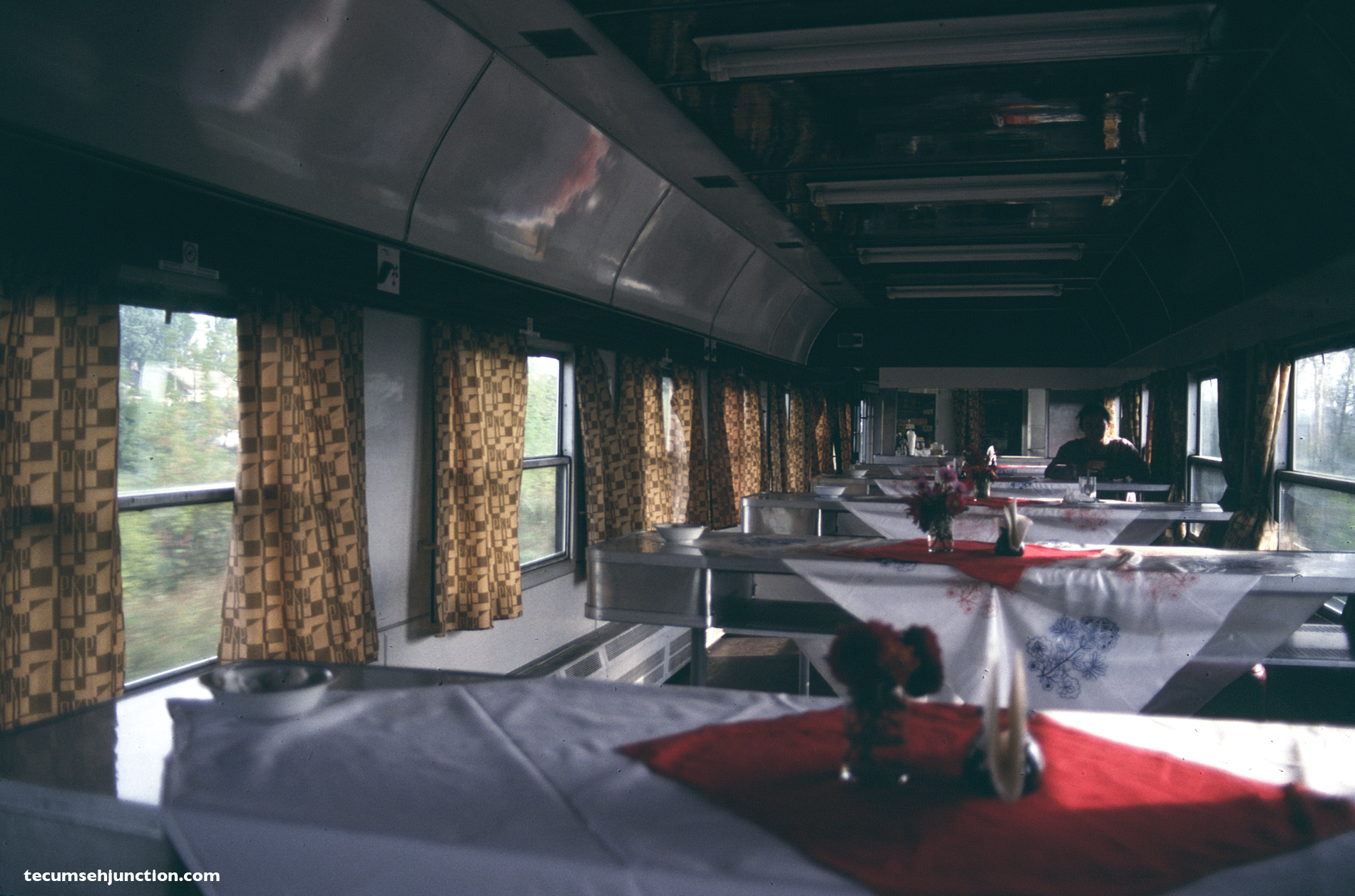 A highlight of riding a Polish train at the time was a visit to the “Wars” buffet car, for a cheap snack or drink. The cars featured stand-up tables, with stools next the windows. (18 September 1990) 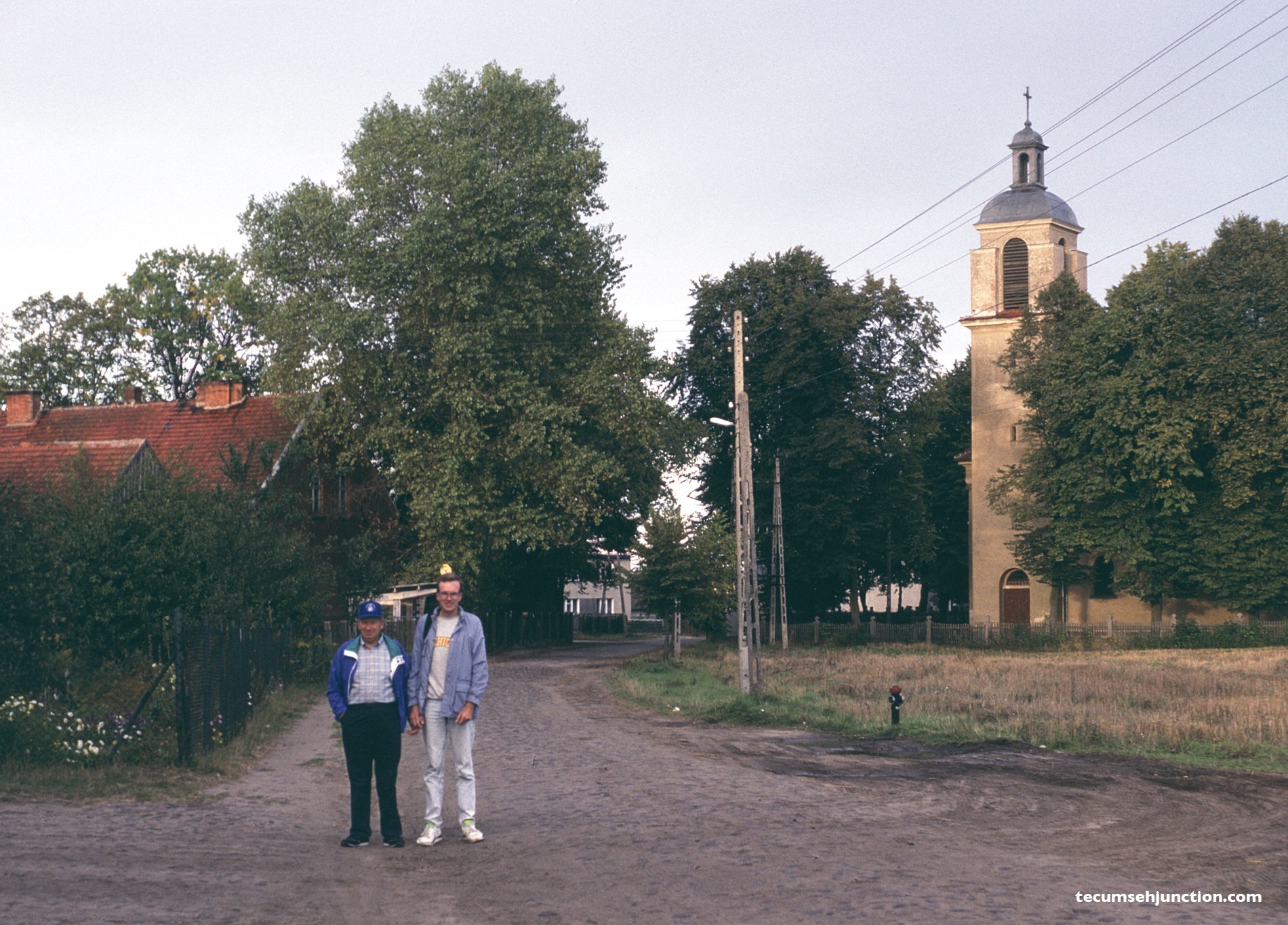 The blog author photographed with his father, Stanley Dobek, in his home village of Odry, Poland. (12 September 1990)