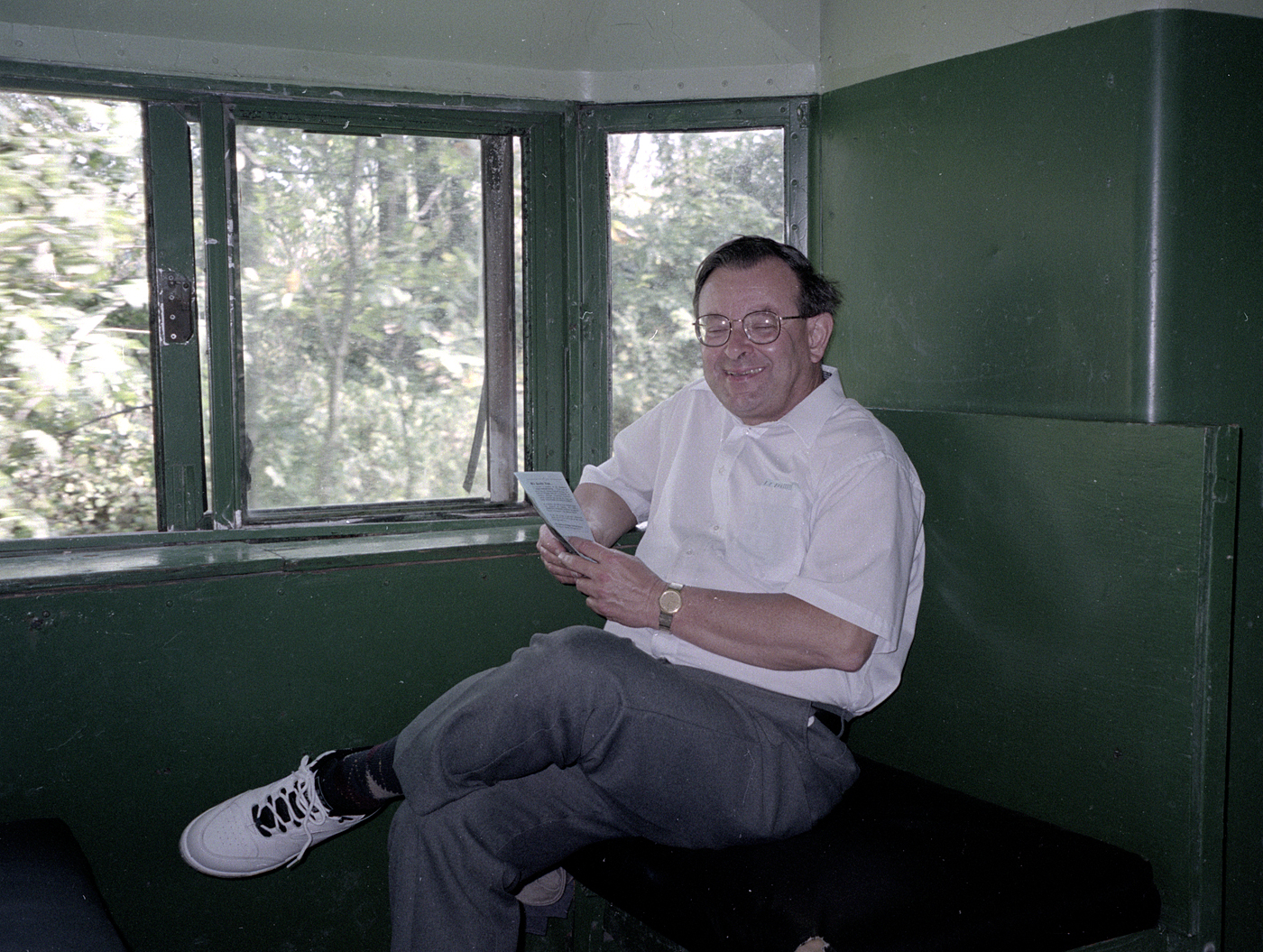 Ed, doing what he liked most—riding a train. Here he is on the Southern Michigan Railroad in the late 90s.

I received word this morning from Tecumseh, Michigan of the passing of my long-time friend and contributor to this blog, Edward D. Hodges, on Sunday evening.

Born in 1938, Ed grew up in a house on South Union Street in Tecumseh, a short distance from the DT&I railroad tracks. As a child he was able to watch the comings and going of the DT&I freight trains, which he chronicled here.

As a child and teenager, Ed also got started in model railroading, with Lionel and later O scale trains. This is a hobby which he was involved in for the rest of his life.

Following graduation from high school, Ed studied mathematics at the University of Michigan, and Western Michigan University in Kalamazoo. The latter allowed him to travel back and forth to the school by train from Ann Arbor.

When he finished college, Ed worked for the Bay City, MI public schools as a mathematics teacher. Living in Bay City during the week, and returning to Tecumseh on weekends, he would use his after-school hours to go out and photograph trains. He extensively covered the C&O in Michigan’s “Thumb” area, as well as the Penn Central/Conrail “Clinton Branch” that ran through Tecumseh. 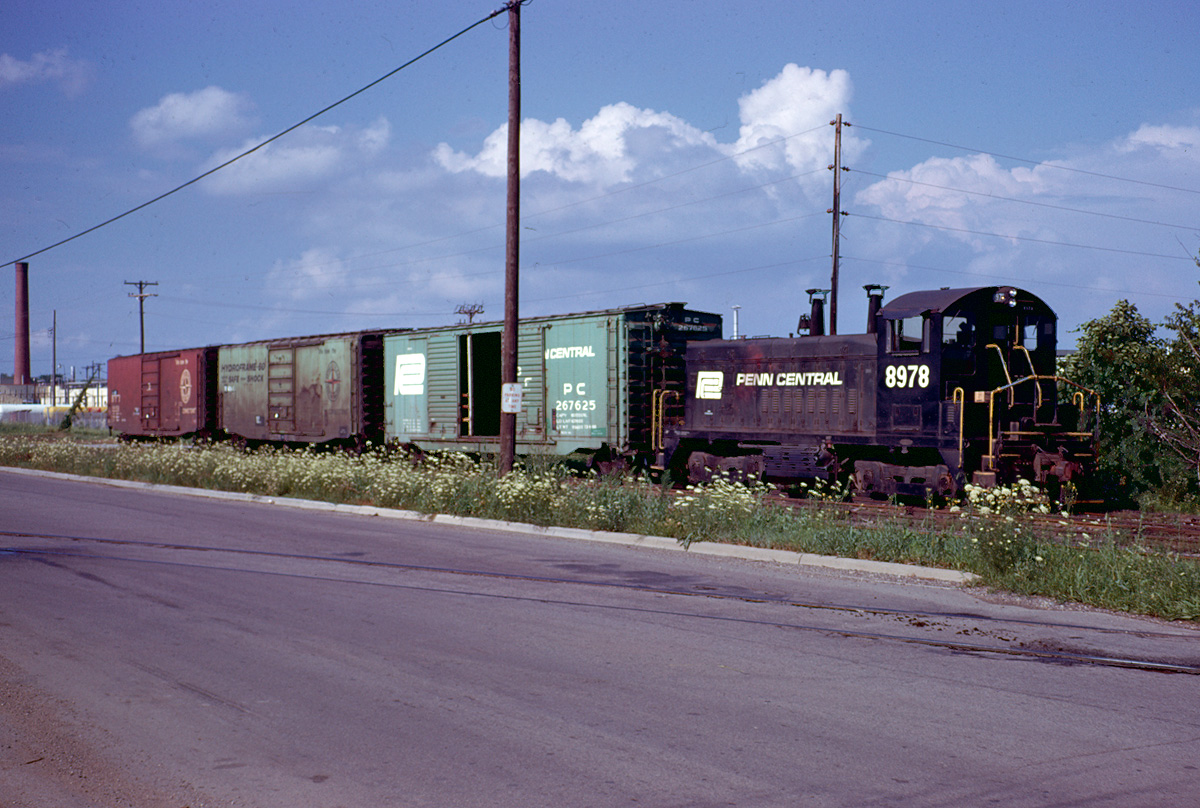 Ed photographed this Penn Central train switching the yard in Tecumseh in 1973.

Ed and his parents were members of the Michigan Railroad Club, and Ed of the National Model Railroad Association, and used these affiliations to take a number of long-distance rail trips in the USA and Canada. The Hodges travelled to NMRA conventions held in various cities, and also on some of the MRC’s tours.

I first met Ed 40 years ago, in 1980. The Michigan Artrain had come to Tecumseh, and as part of the event, my model train layout was on display in a church hall near the train site. My friends and I were trying to get a model railroad club started in the area, and Ed visited the display and signed up. We soon started having club meetings, and Ed would often provide a slide show as the entertainment, covering either one of his trips or with slides of the Clinton line. He also used to take small groups railfanning, providing a first-time glimpse into “far-away” places such as Flat Rock or Toledo, for those of us yet without a driver’s license!

That little model train club grew into the Lenawee Area Railroaders, complete with a newsletter, The Cross Tracks, to which Ed contributed articles. And in 1982, when Conrail put the Clinton Branch up for abandonment, the LAR morphed into the Southern Michigan Railroad Society, a non-profit organization with the goal of purchasing and preserving the line.

From the very beginning, Ed was a board member of the SMRS and assisted in efforts to get the project going. In 1983 the group began clearing trees and brush on the line to get it ready for a return to operation, and Ed would be there each Saturday, pruning saw and clippers in hand. When it came to changing railroad ties, Ed would be there, working a shovel and moving ballast. 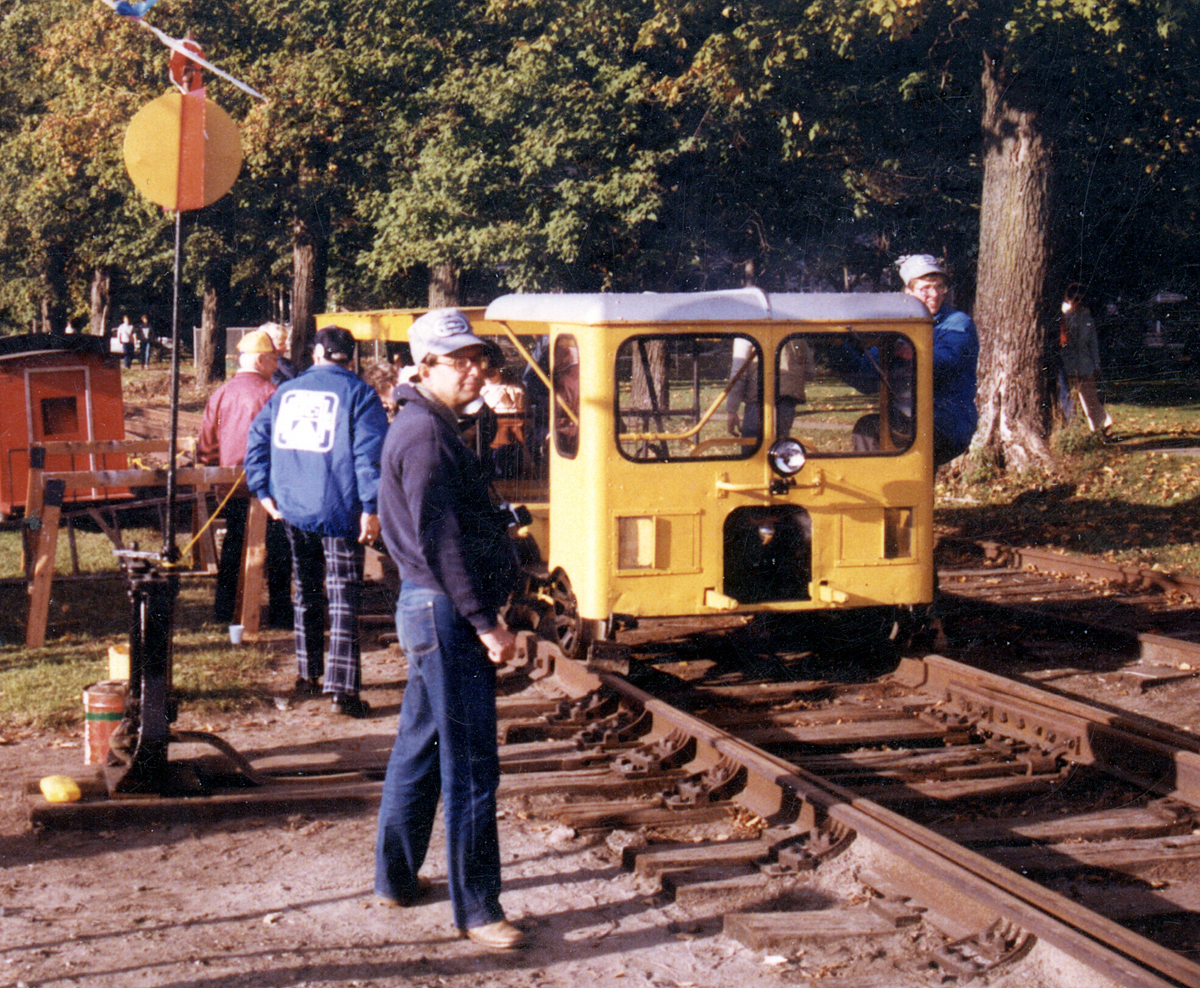 Ed worked as a conductor when passenger operations began in 1986, and would be on hand almost every Saturday and Sunday throughout the season, riding the trains back and forth between Clinton and Tecumseh, collecting tickets, flagging crossings, and taking care of passenger safety. 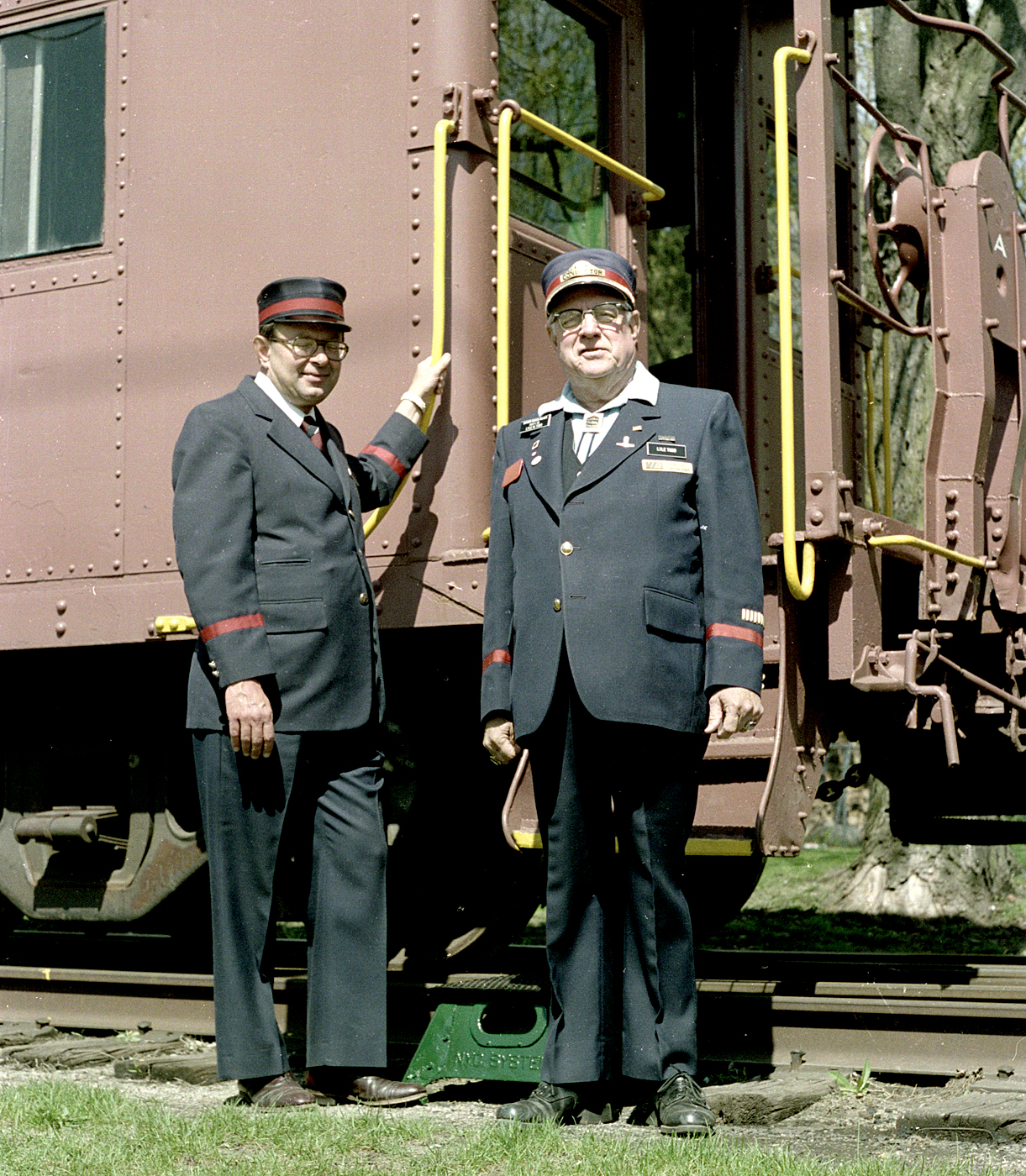 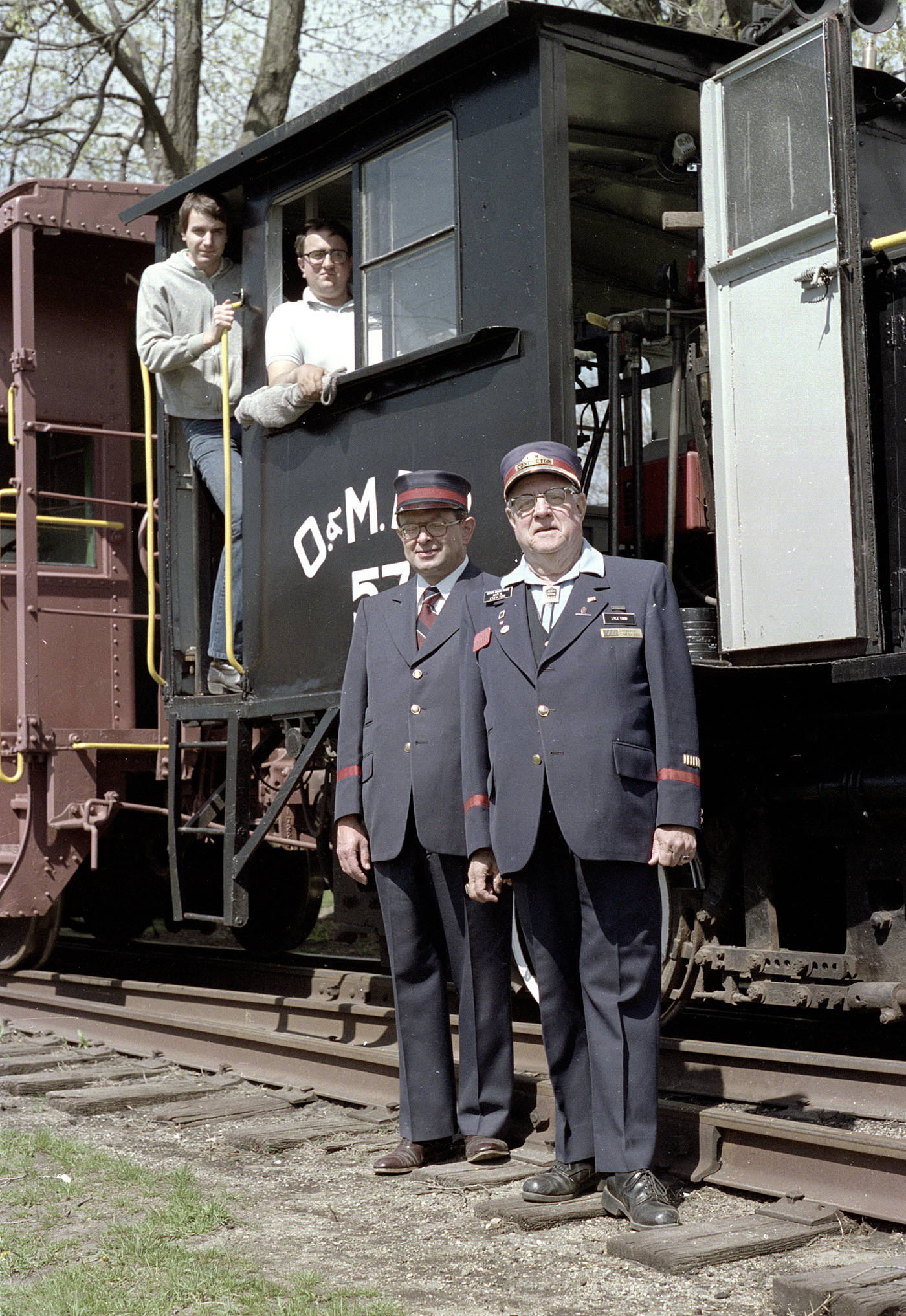 Ed also served as head of the SMRS museum section for many years, preparing interesting displays for the museum room and managing the group’s archives. 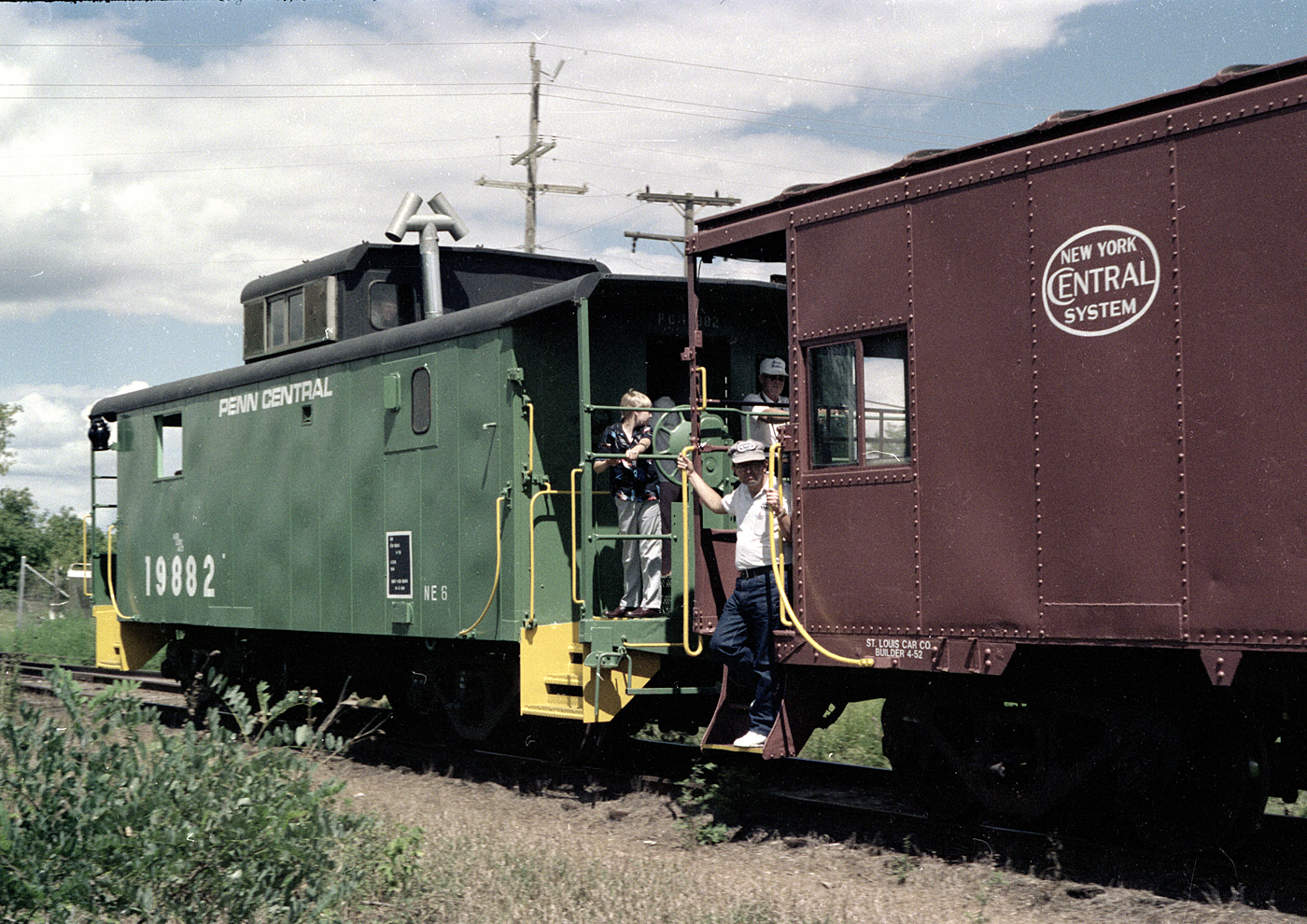 Ed rides the steps of the SMRS’s ex-NYC caboose, summer 1987. 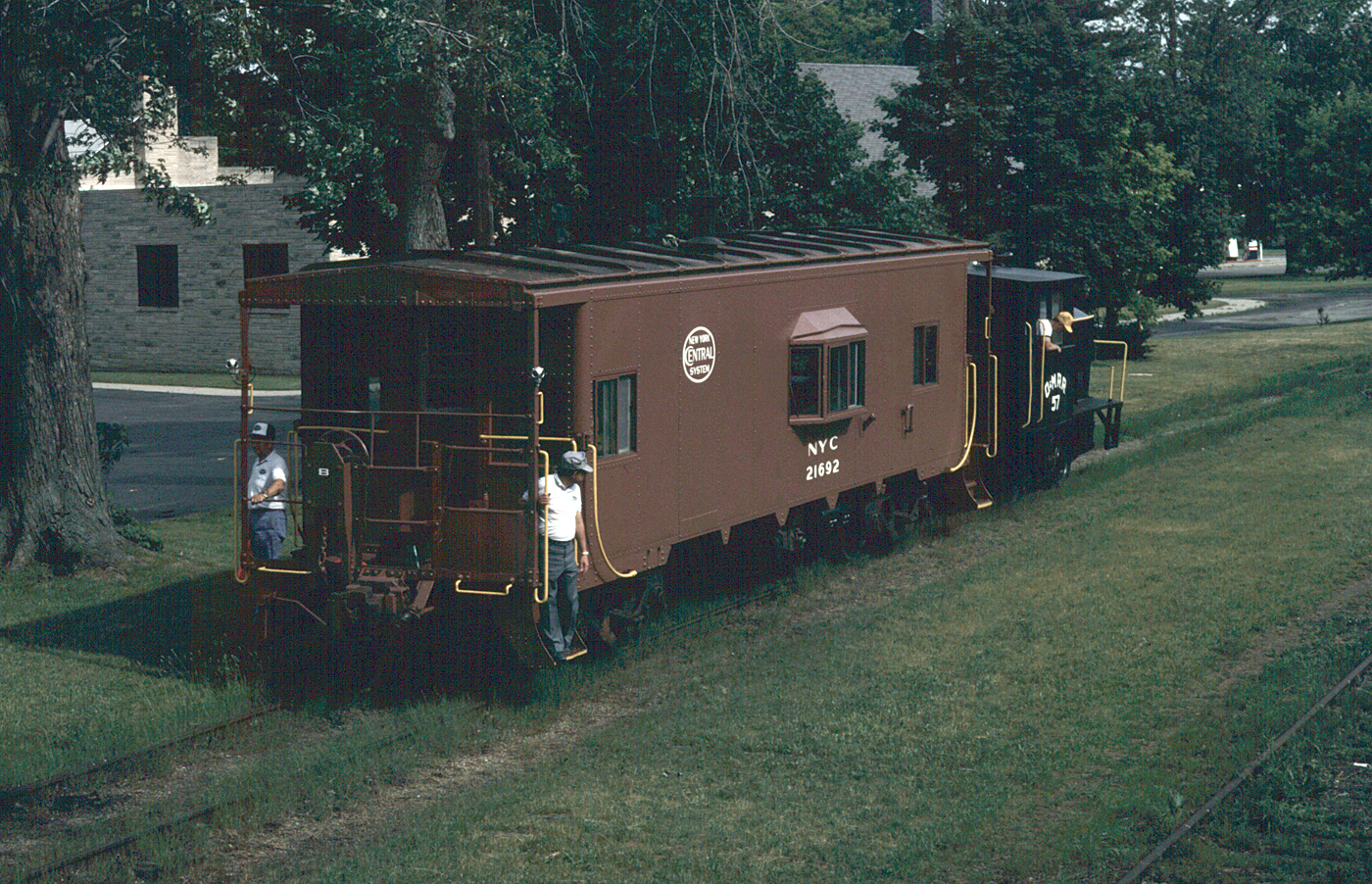 Ed looks back as the SMRS train backs out of Tecumseh towards Clinton, Summer 1987.

Ed left the SMRS with a number of other volunteers in late 1988, and about the same time retired from teaching. Through the 2000s he continued to be active in model railroading. Ed had two layouts in his basement, on which he was often changing the track arrangements and buildings. One was a 3-track Lionel layout, and other a 2-rail O-scale switching layout. Ed’s focus in model railroading was structures, and he was a master of scratch-building. His layouts were populated by realistic-looking buildings built from scale plans in the model railroading magazines or from old photos. He constructed models of the historical railroad buildings in Tecumseh, some of which have been donated to the Tecumseh Historical Museum for display. 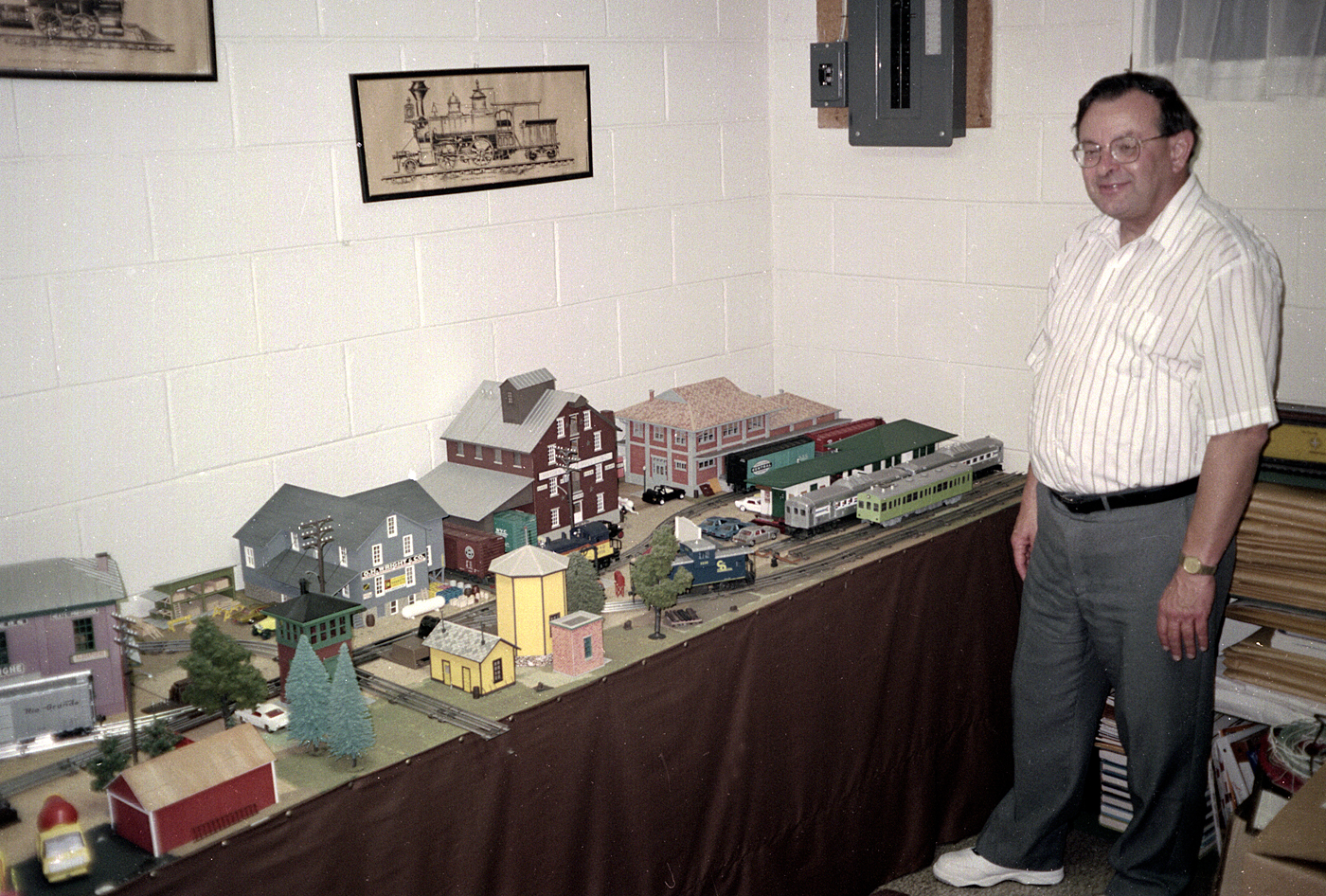 Ed and one of his layouts 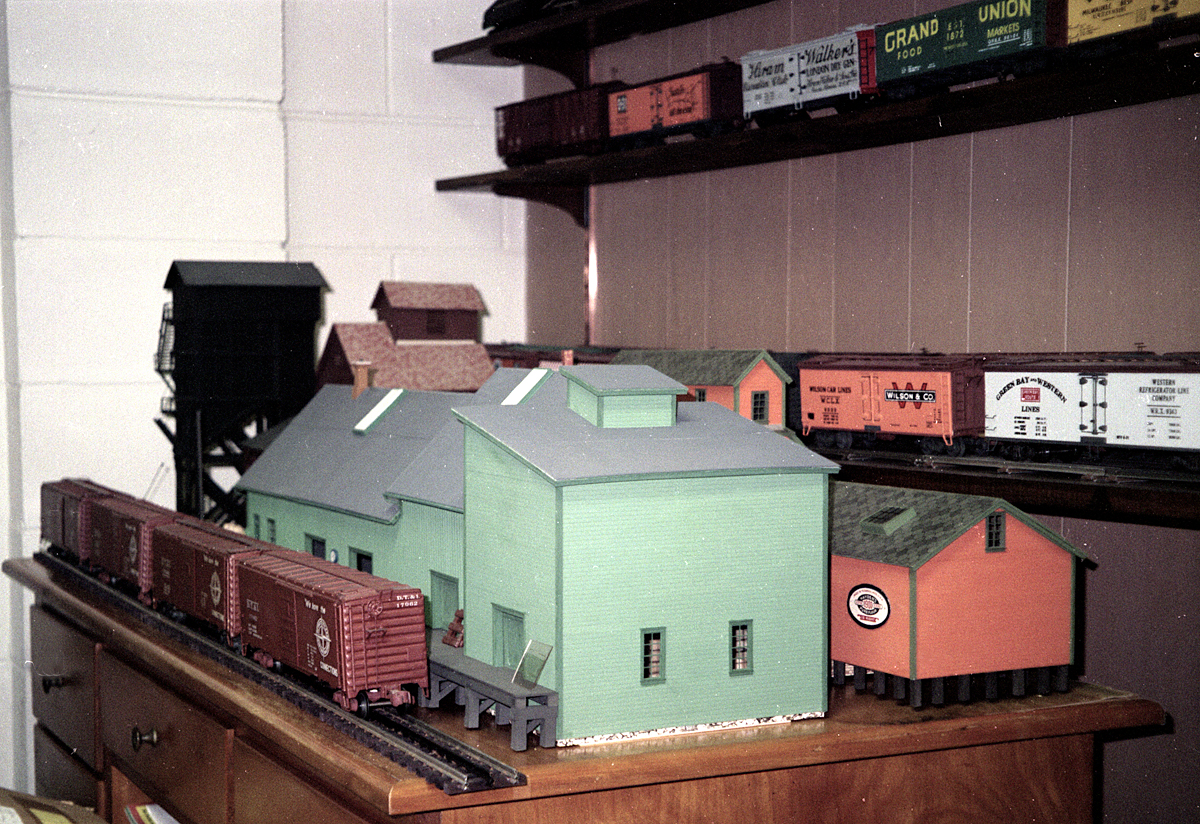 Some of Ed’s scratch-built buildings

In his later years Ed also became involved in researching the history of the railroads of Tecumseh. He spent numerous hours visiting various libraries and archives, pouring over old newspapers, maps and other documents to put together a detailed history of Tecumseh’s three railroads.

In the last few years Ed’s mobility became constricted, but he maintained his interest in railroads, As late as last year he gave a talk on the railroads of Tecumseh at the Tecumseh library, and was until recently a board member of the Tecumseh Historical Museum.

Although I left Tecumseh, I maintained regular contact with Ed by telephone and letter (he never entered the computer age, and more than once expressed his irritation at being unable to buy new typewriter ribbons and typing paper!), and he always had a good (and often funny) story to tell. He was interested in my travels and my model railroading efforts, often offering good advice. And it was always nice to see him on my return visits to Tecumseh and go for a meal and a chat. 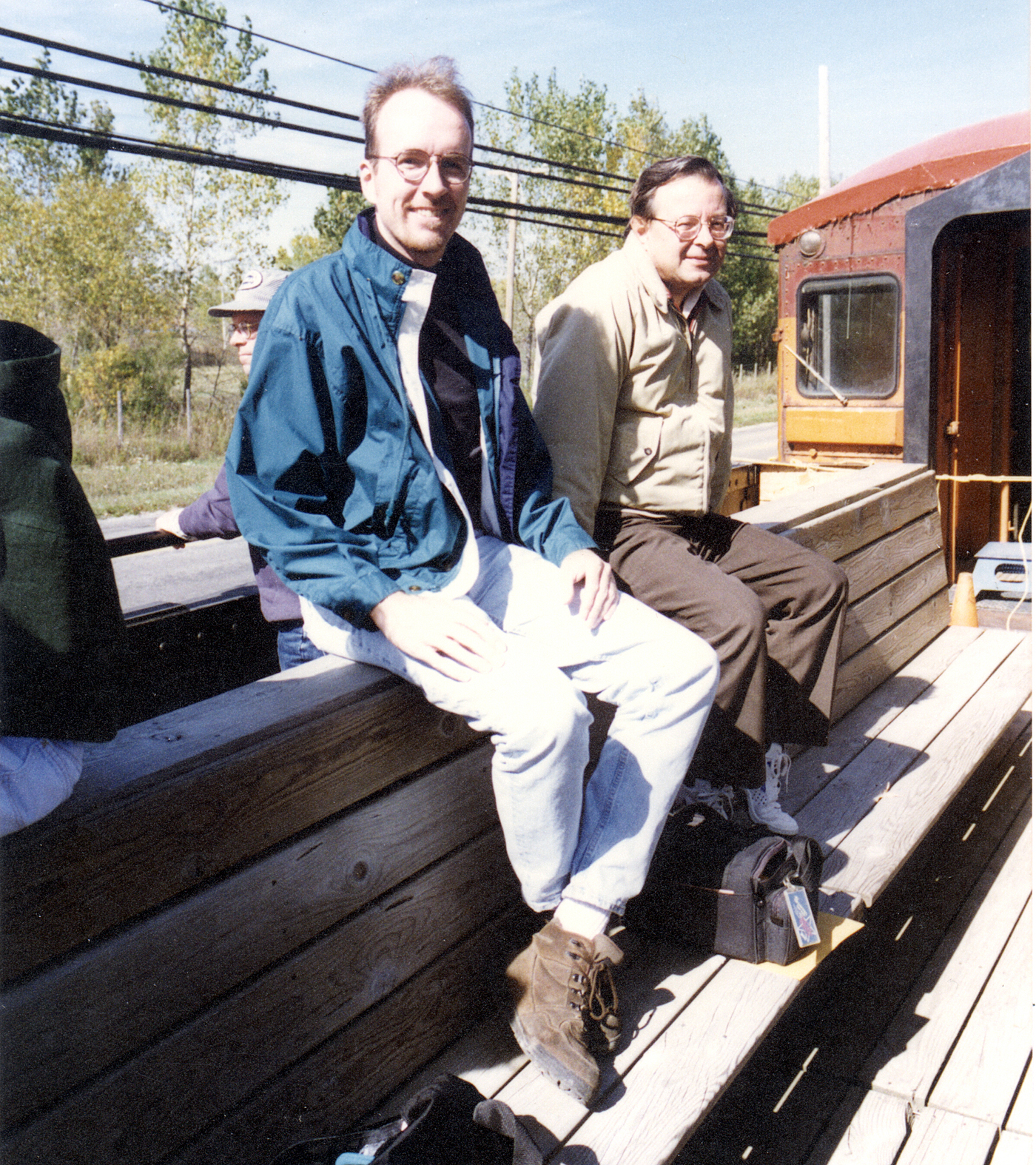 The blog editor and Ed, making a return visit to the Southern Michigan Railroad in October 1996. (Photo courtesy Dale Roberts) 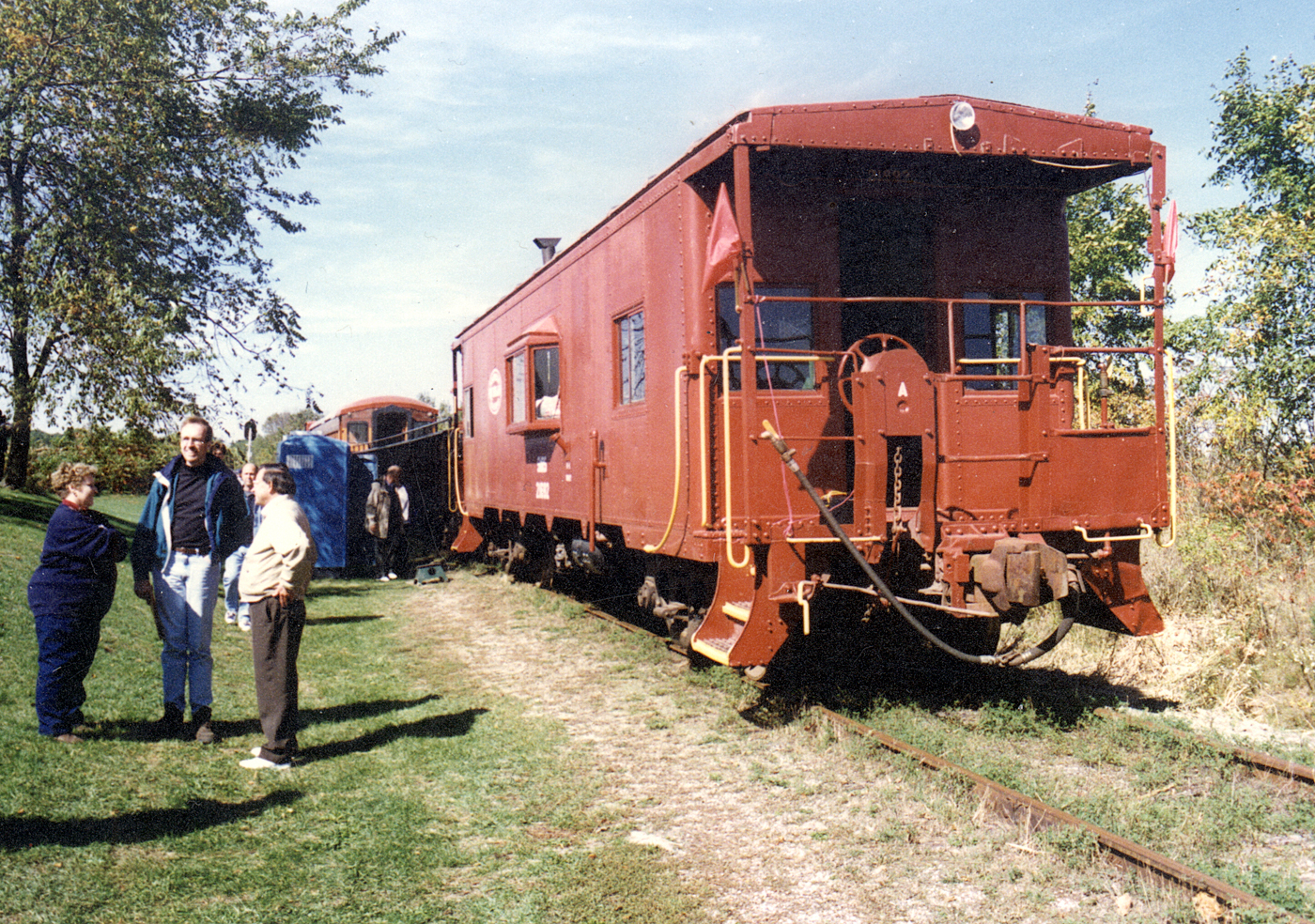 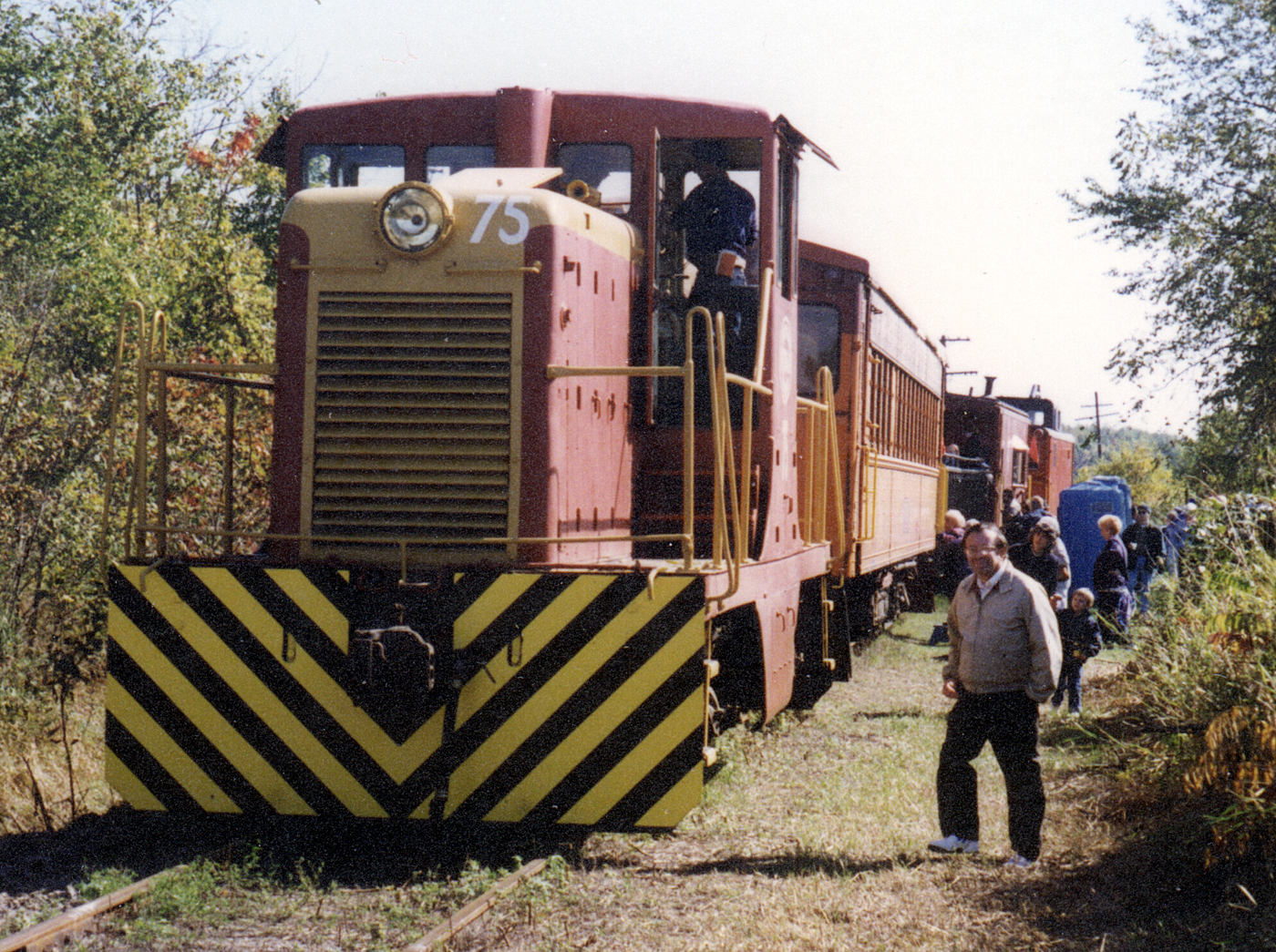 Ed inspecting the SMRS’s GE #75, and lamenting that we had nothing like this during our time on the SMRS. Raisin Center, Mich., October 1996. (Photo courtesy Dale Roberts) 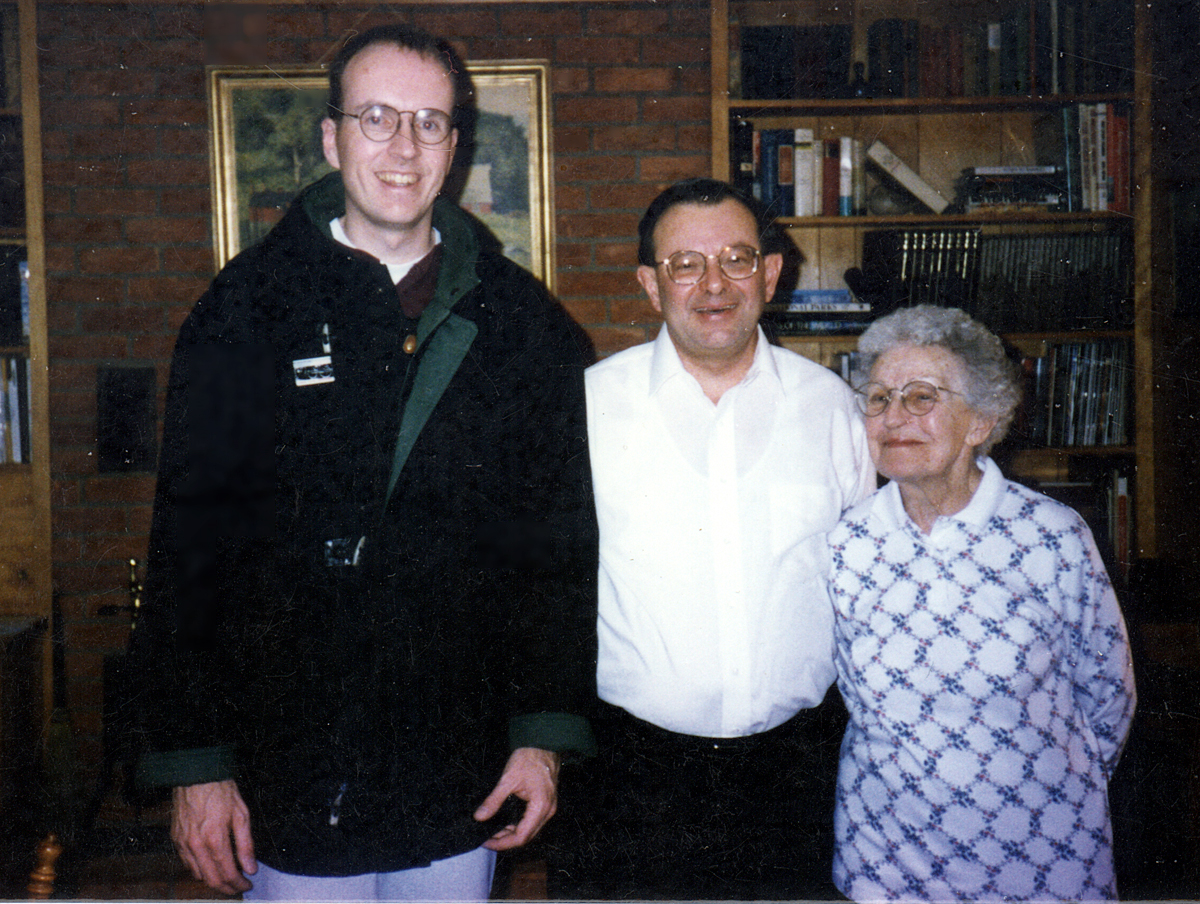 The blog editor with Ed and his mother, Helen Hodges, in Tecumseh. Helen was also a supporter of the SMRS, helping with meals and providing baked goods on most weekends!

It has been a privilege to have had Ed as a friend and colleague for so many years. He will sorely missed.