Before August 2018 runs its course, I thought it appropriate to note that this month marks an even 180 years of the arrival of the first train in Tecumseh.

The Palmyra & Jacksonburg Railroad a line constructed north from a Palmyra connection to the Toledo-Adrian line of Michigan’s first railroad, the Erie & Kalamazoo Railroad. The first P&J train arrived in Tecumseh on 09 August 1838. Tecumseh would then serve as the terminus of the line for several years, as the P&J’s money ran out and further construction northward was not possible at the time.

“The first train arrived at Tecumseh for a celebration of grand dimensions. A wood burning engine, drawing several open cars loaded with cheering passengers from Adrian, Palmyra and Toledo, clattered into the village at the whirlwind speed of ten miles-per-hour. The train was greeted by a majority of the inhabitants of the countryside, and a lavish part (by 1838 standards) was held at the Peninsular House in Tecumseh.” (Excerpt from the article “From Horseflesh to Horsepower” by John Uckley, in the January 1978 issue of Rail Classics)

Thirty years ago, in 1988, the recently-formed Southern Michigan Railroad Society decided to mark the sesquicentennial of the event in a similarly grand way. Under the organization of then museum director Edward Hodges, the arrival of the first train was recreated, along with a band, speeches by politicians and a banquet (the Tecumseh Masonic Hall substituting for the long-gone Peninsular House).

The SMR train of a locomotive and two cabooses was staged on the south side of Tecumseh, where the VIPs boarded. Following the train, a set of motor cars carried any members of the public interested in participating. The train ran through north through downtown, arriving at the site of the old north depot (by St. Peter’s Church) to the sounds of Don Dobrowski’s jazz ensemble.

From the back platform of the train, Ed Hodges greeted the attendees and gave a talk about the history of the railroad in Tecumseh and the importance of the occasion. This was followed by speeches by state senator Norm Shinkle and state representative Timothy Walburg.

The speechmaking finished, the gathered crowd re-boarded the train for the short ride north to Brown Street. From there, it was a short walk on the warm summer night to the Masonic Hall. The festive banquet lasted several hours, with music and further speeches, including one from Tecumseh mayor Harold Easton. 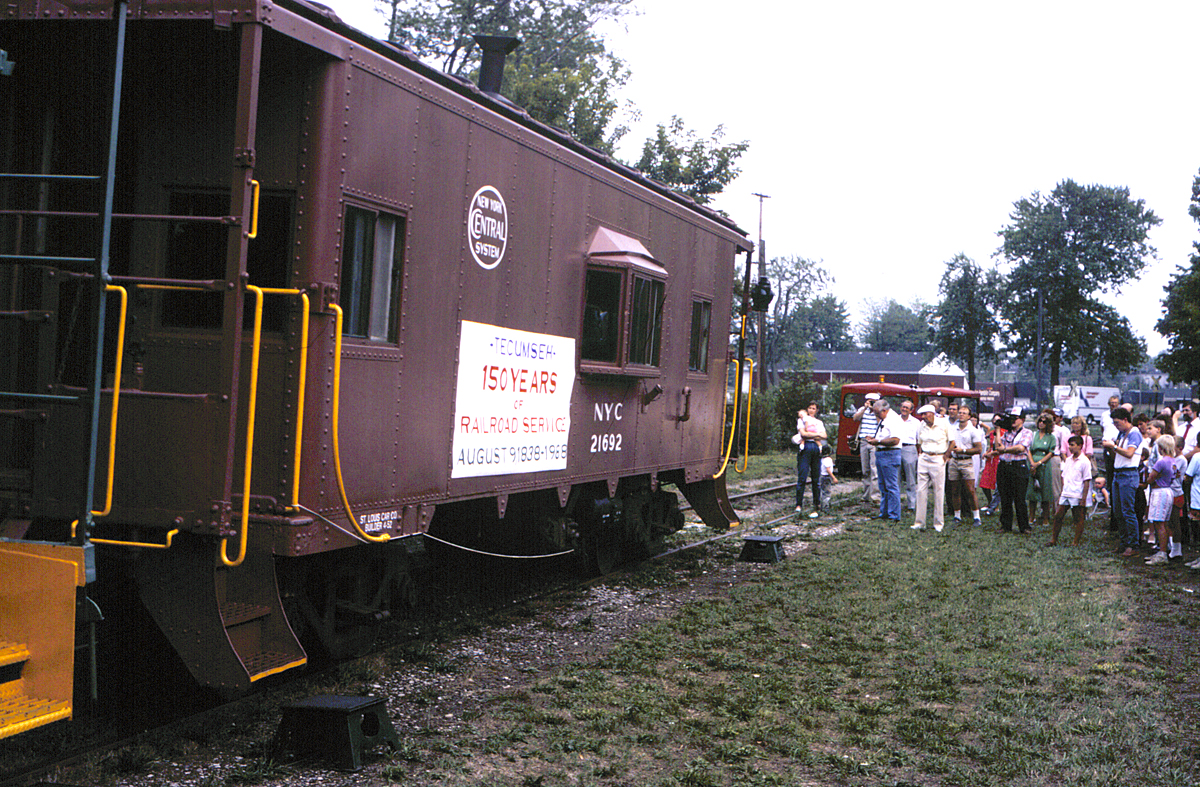 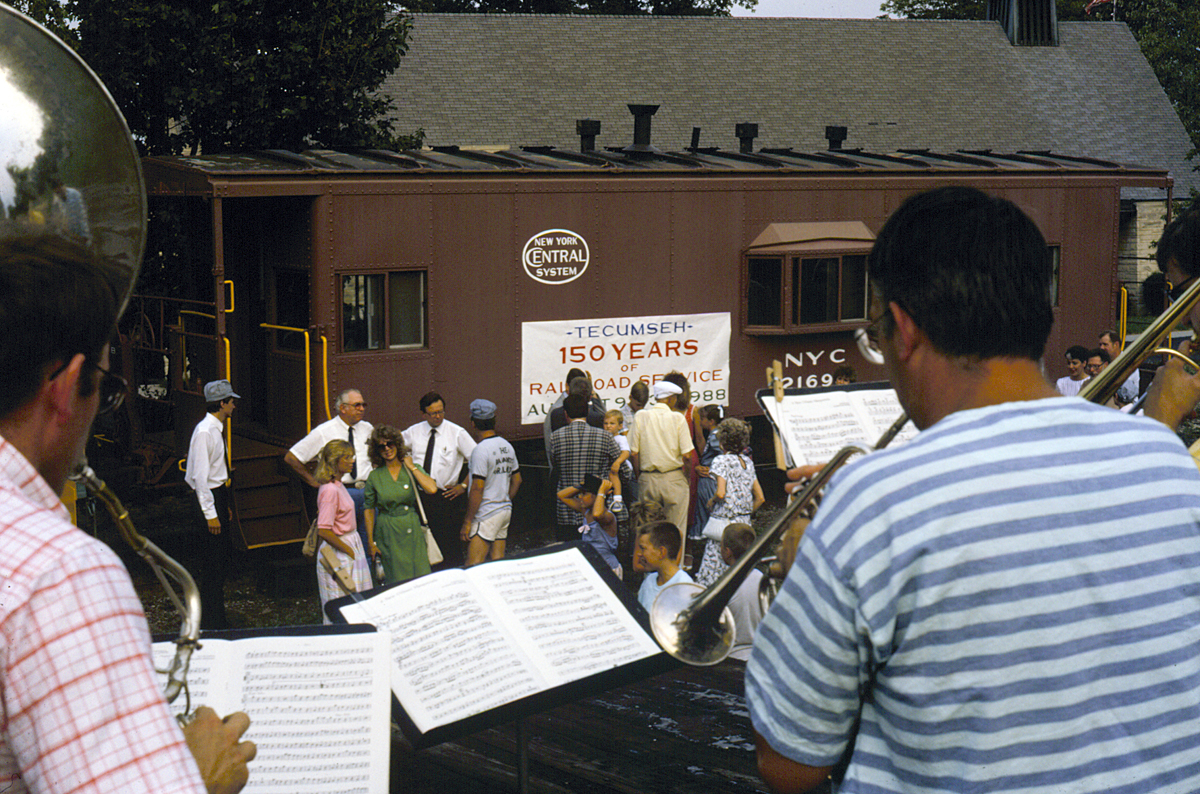 The band plays as the crowd gathers. 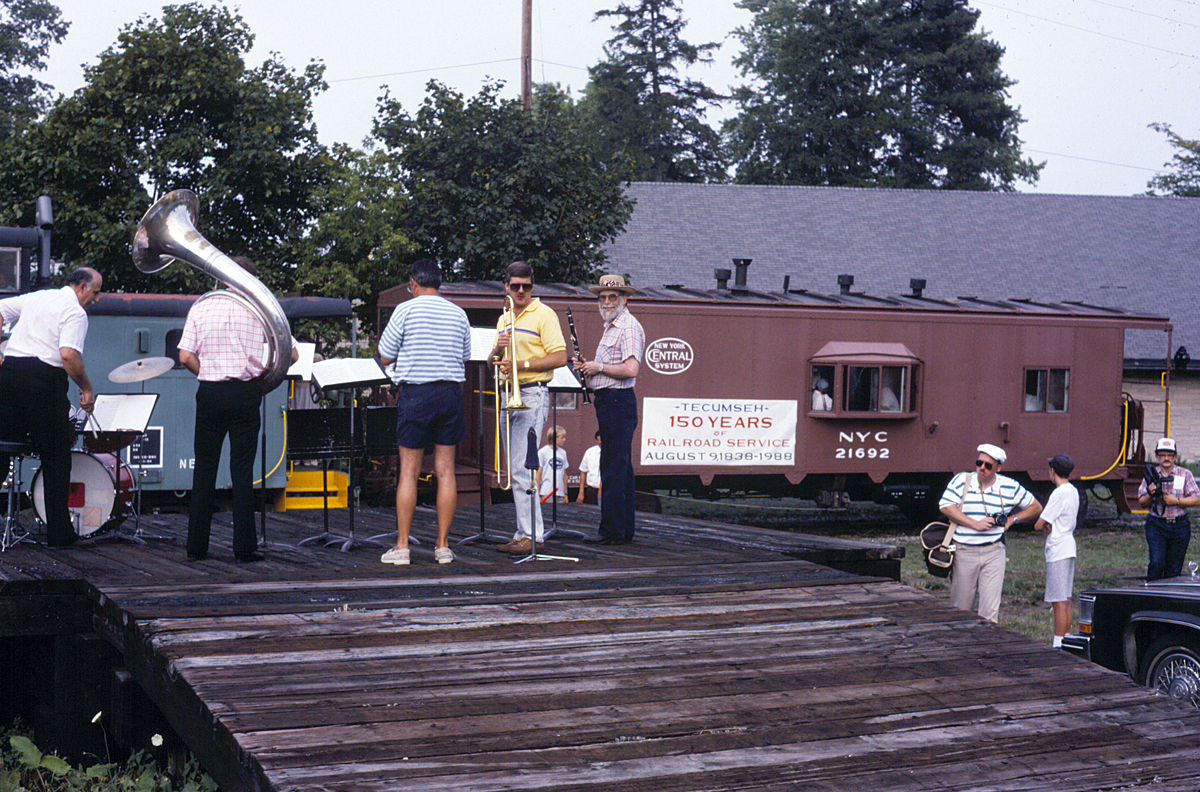 Don Dobrowski’s jazz ensemble played on the old railroad loading dock. This area was site of Tecumseh’s north railroad station, and the original terminus of the Palmyra & Jacksonburg Railroad. 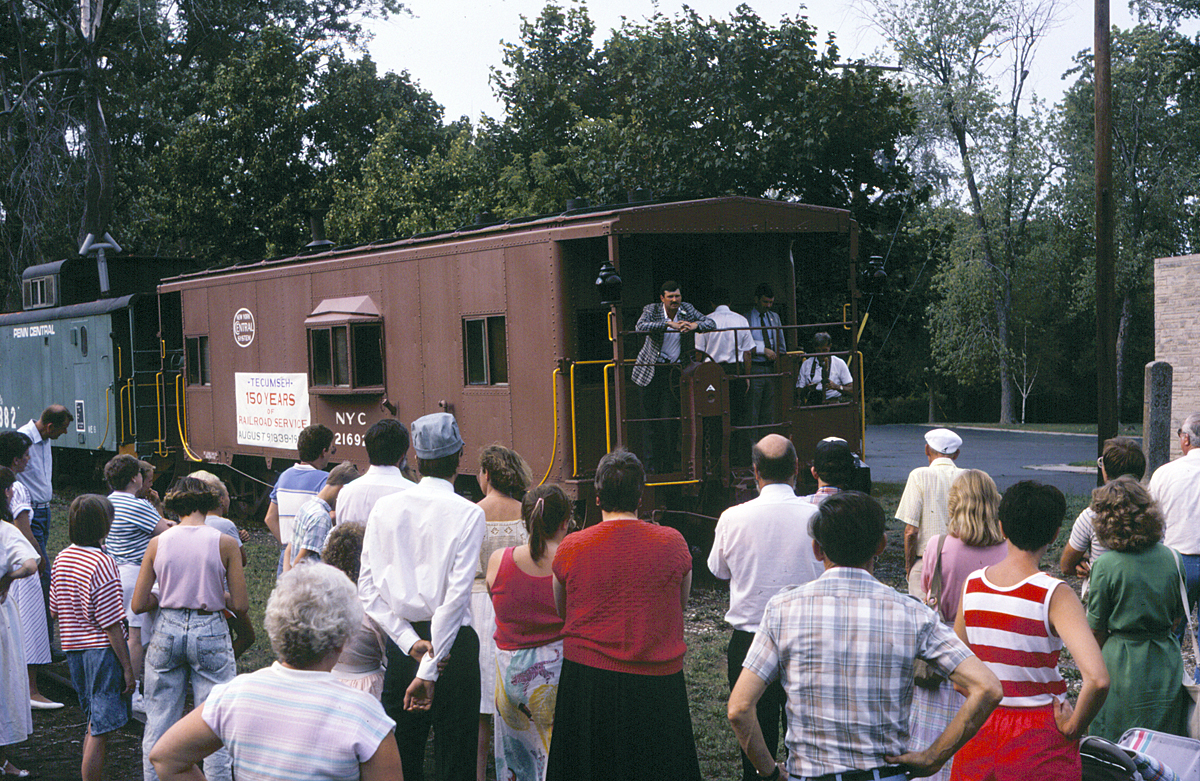 State senator Norm Shinkle addresses the crowd from the rear of the SMR caboose.