In the last few years I have returned to the hobby of model railroading. A change of apartments in 2012 finally provided me with room for constructing a layout, and about the same time I became involved with a modular model railway club in Toruń, Poland, and have been attending their exhibitions. So, with Christmas just around the corner, and its many connections to trains, it’s an appropriate time to look back through the years.

My first train set I received when I was about 3 years old. It was a battery-powered set from Marx. There was a loop of metal track, a plastic, battery-powered 0-4-0 with tender, a gondola and boxcar, and a caboose. The locomotive was mostly plastic, while the cars were metal! (That would never be allowed in today’s safety society.)

My parents later told me that the set was purchased using S&H Green Stamps, and that it was present for learning to use the potty. 🙂

Marx offered the set in Union Pacific and New York Central versions, and I no longer remember which I had. The set is long gone, but looked something like this: 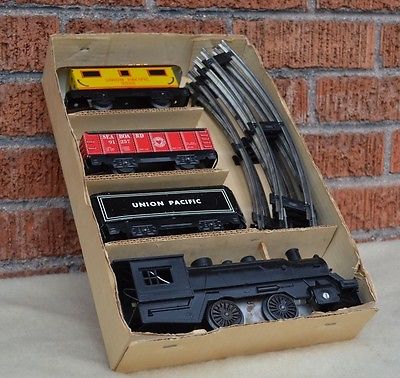 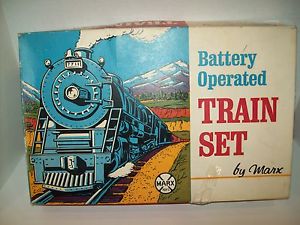 Obviously, I must have liked that first Marx set, because Christmas 1970 brought me a Marx “Big Rail Work Train”: 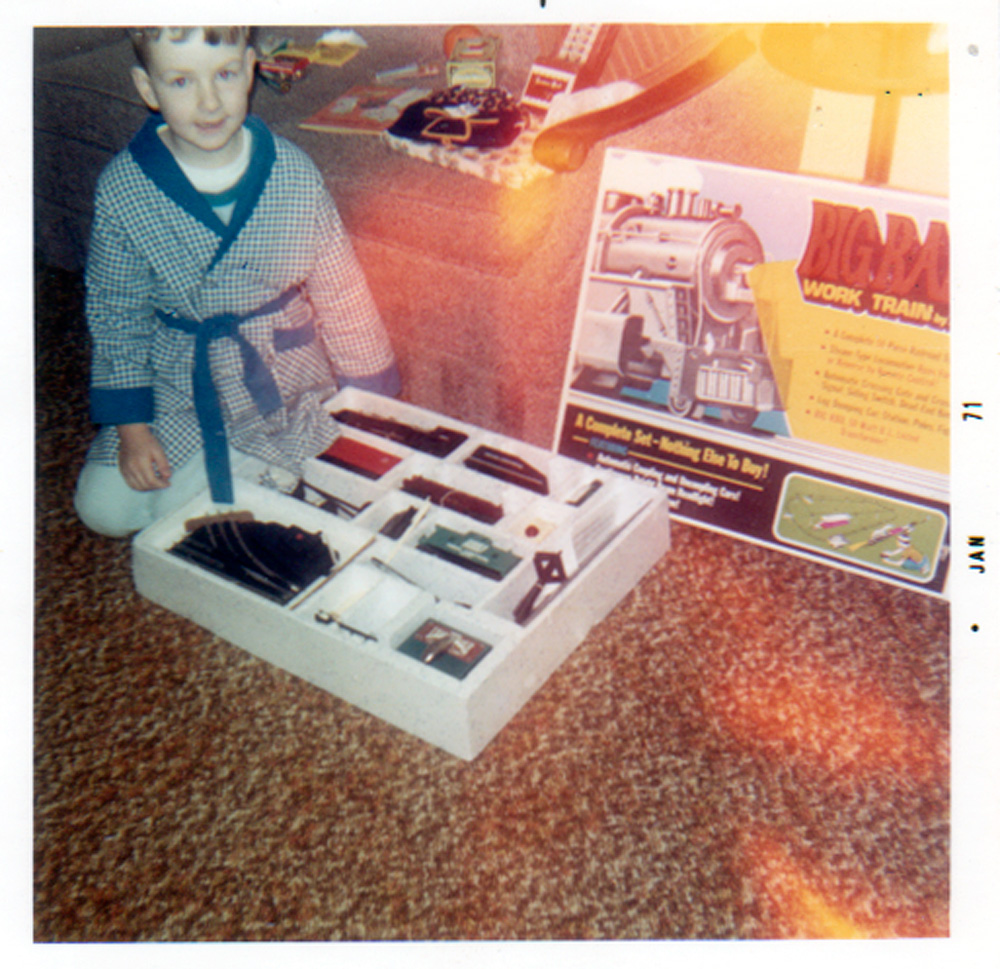 This was the BEST TRAIN SET EVER! It included a loop of track, a switch, a crossing gate, a wig-wag signal, a station, a log unloader, telegraph poles, people figures, not to mention a PENN CENTRAL(!) 2-4-2 with smoke, a B&O boxcar, an Erie flatcar, and a PC caboose: 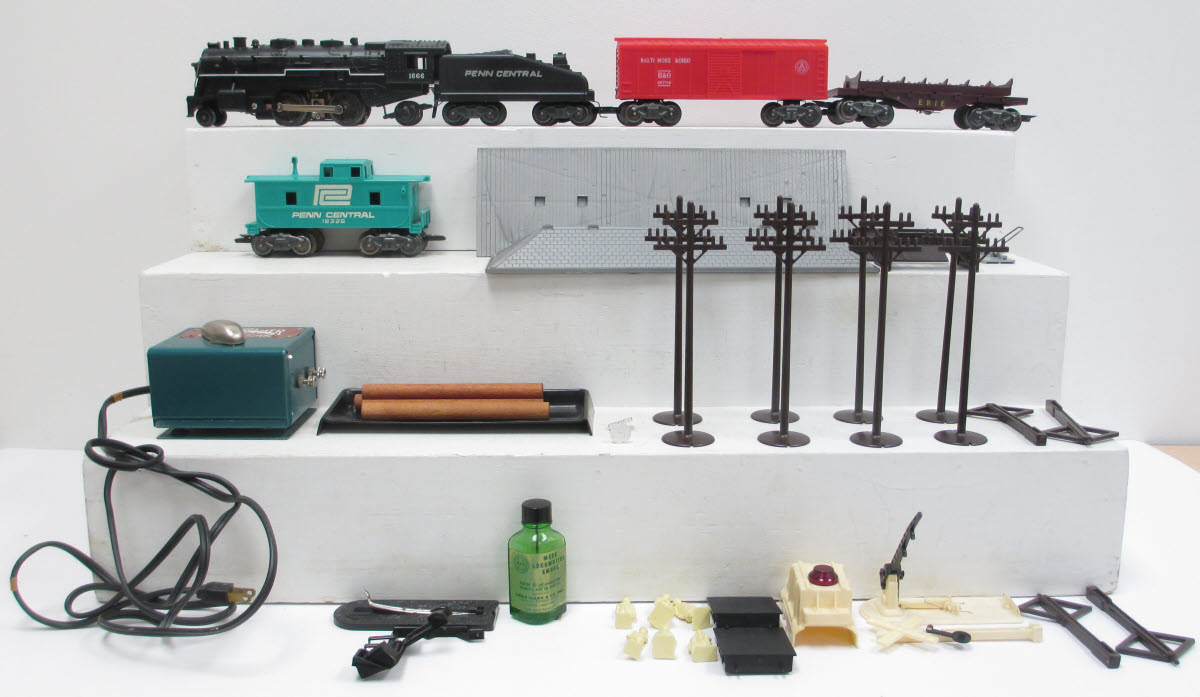 It was even better than in the TV commercial:

Did I ever get a lot of fun out of this set! Over time I added more track and even some Lionel accessories. It served me faithfully right up until junior high school, a period of about 7 years.

I entered the 7th grade in the fall of 1977, and one of the new friends I met in the new school was Dale Pape. Dale had an HO scale layout at home, and it was a wondrous thing. He had number of cars and locomotives, two main lines, tunnels and mountains. I found out you could easily buy HO scale cars in a store. With my Marx train, I was limited to what I had, as Marx was out of the business by then. Time for a change!

Christmas 1977 found an AHM freight train set under the Christmas tree. Purchased from Woolworth (a reliable AHM dealer at that time), it included a Conrail “C-liner”, several freight cars, and a Conrail caboose. There was a loop of track and a transformer, but not much else. But it was a starting point. The set was something like this, but without the extra cars on the right: 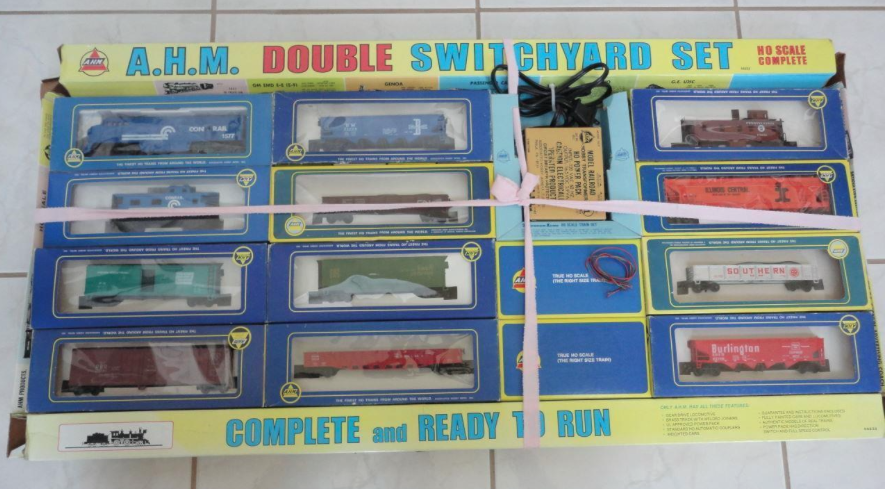 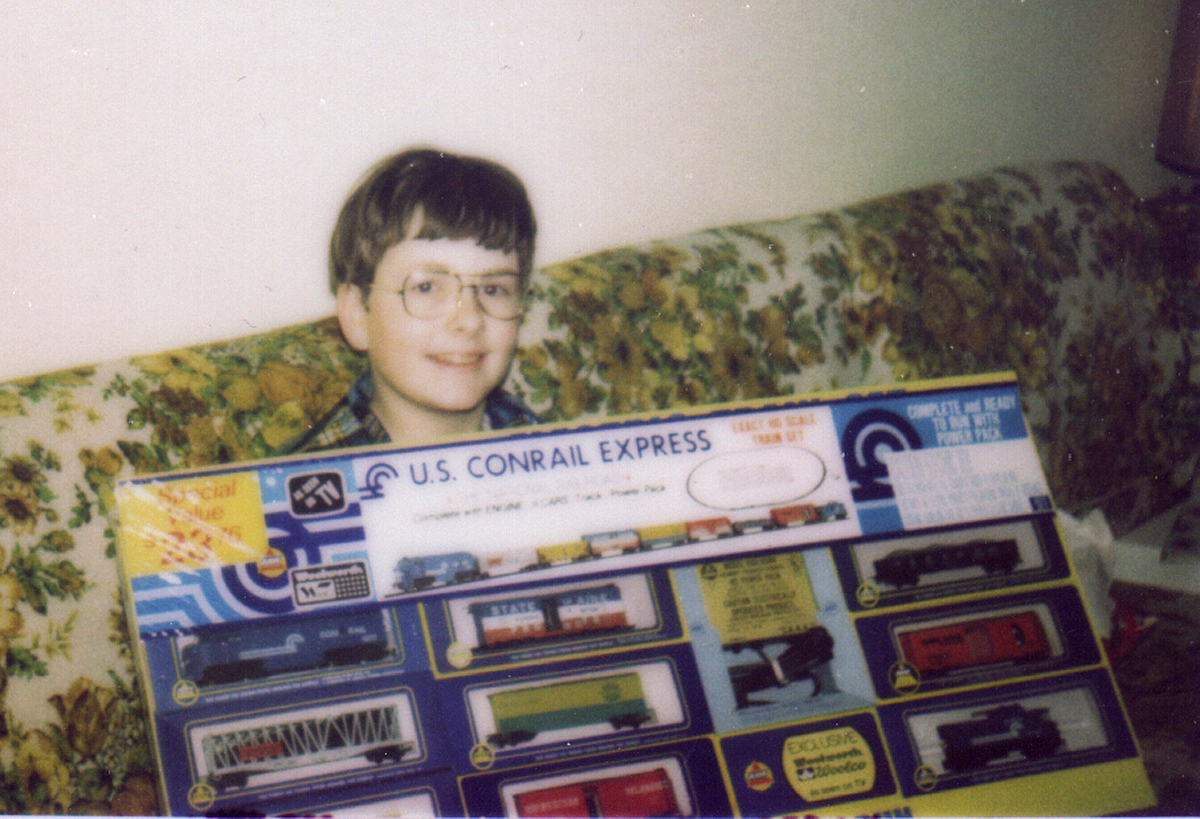 Very quickly I realized that to be a proper model railroader, the tracks should be attached to a base in a more permanent fashion. My dad helped me with this, setting up a 4×8′ piece of plywood, and covering it with green burlap to simulate grass. I was able to put down two running tracks with a crossover, and a few sidings. In the center there was a small town. As you can see, my equipment roster was quickly expanding: 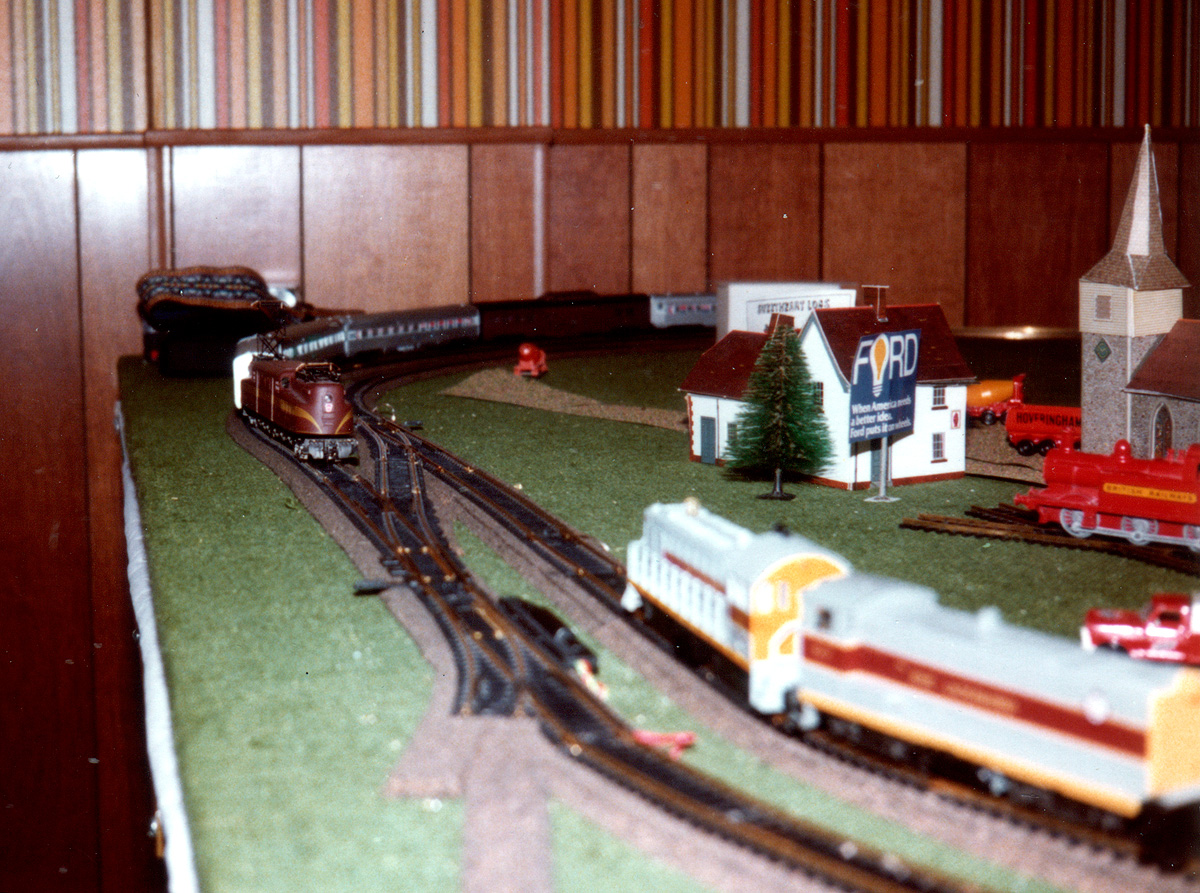 This small layout was actually taken for a weekend display at the mall in Adrian, Michigan in 1978. Even though it was only a basic layout, it attracted a lot of attention, and I decided that a larger layout, built for exhibition, would be a good idea. So, the tracks came up, the 4×8′ board was cut in half, and work went ahead on an exhibition layout.

My exhibition layout was 24′ long and 2′ wide, but with a 4×4′ turning loop at each end. Thus there was only one running track, but the longer center part of the layout appeared to be a double-track railroad.

The first incarnation of this layout was a British-American theme, allowing me to combine my model railroad interests and equipment onto one layout. (I imagined that some American railroad had purchased used British equipment and imported it!)

The turning loops at each end were in tunnels, which did lead to problems in case of a derailment! The main lines ran along the front of the layout, and behind them there was a  (British) passenger station and high street, and also a freight yard.

The layout had its first public exhibition in April 1980, when the Michigan Artrain came to Tecumseh for a visit. The Artrain was a mobile art gallery housed in old railroad passenger cars. In Tecumseh, it was parked on a siding behind St. Peter’s Episcopal Church, and the church hall was used for a community arts festival. I was given a room there in which to display my layout.

The layout was set up for the weekend, and together with friends from school we operated it all weekend long. During the weekend a lot of new friendships were made with local railroad enthusiasts and modelers, and it soon led to the formation of a local club, the Lenawee Area Railroaders. This later became the seed for the Southern Michigan Railroad Society.

Below are some photos from that weekend: The freight yard on the display layout. Many cars still had horn-hook couplers. 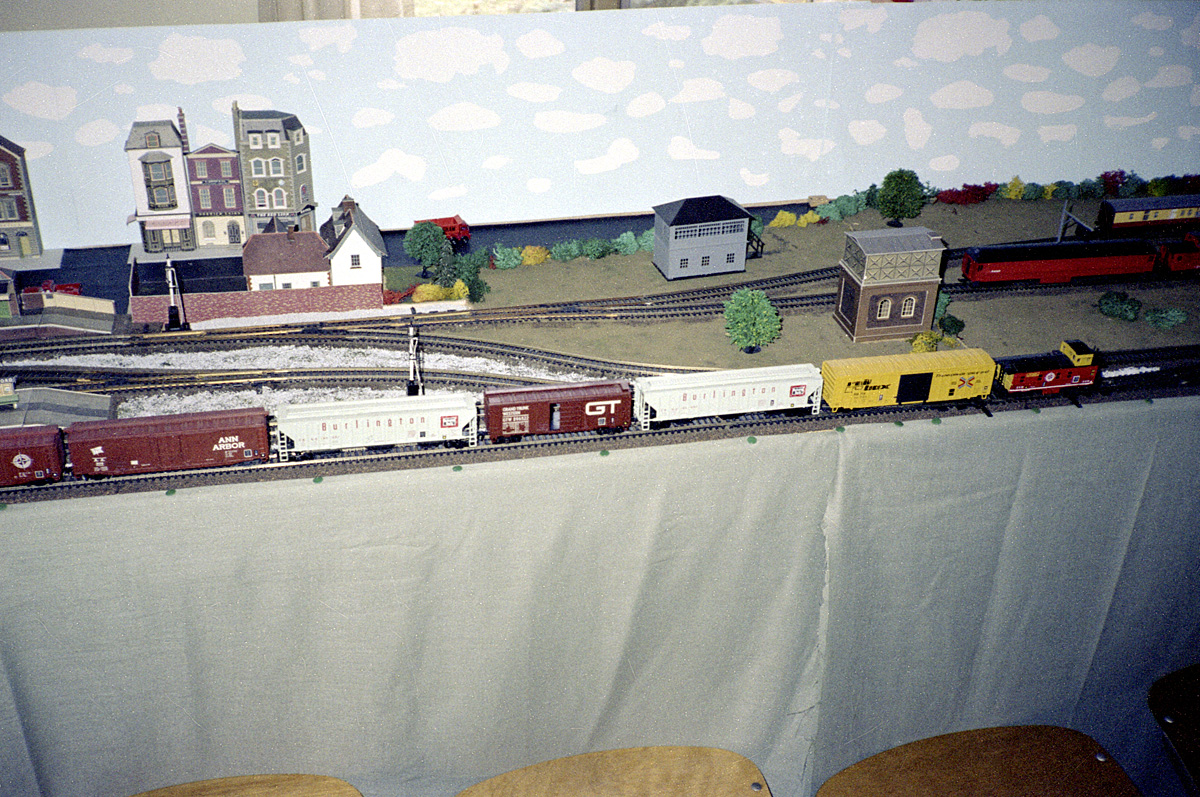 This is the center of the layout. A freight train is passing on one of the main lines. 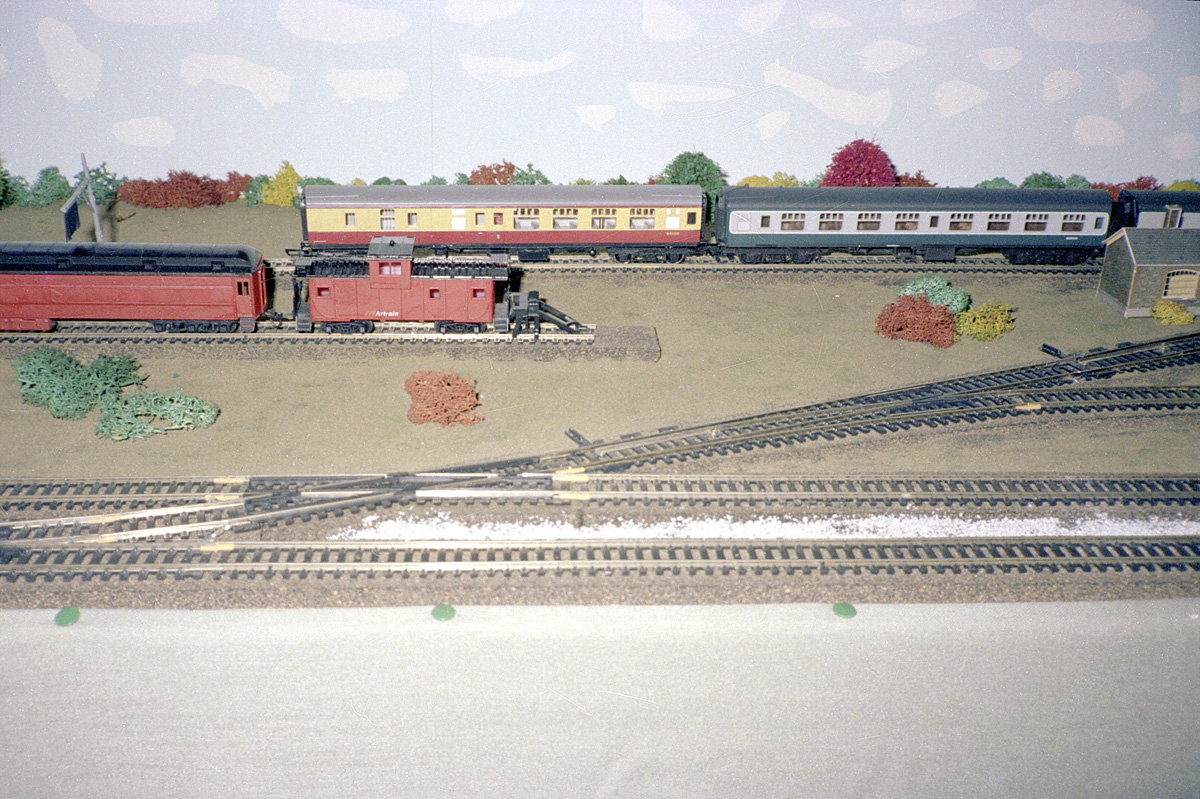 In the foreground are the mainlines, while in the back there was a track connecting the station with the yard, and two British carriages sit here. Also visible is a “mini-Artrain”, made by Dale Pape. 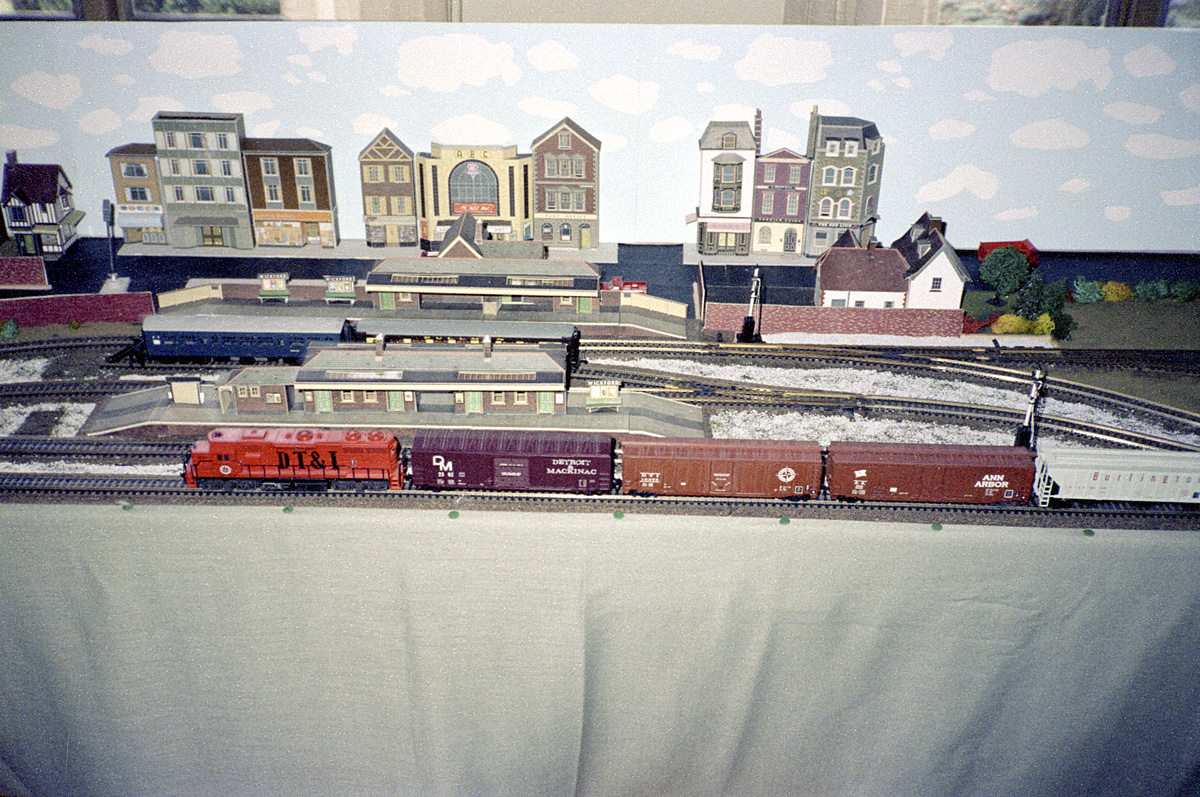 The key feature of the layout was the passenger station and town, all in British style. A DT&I freight train passes! 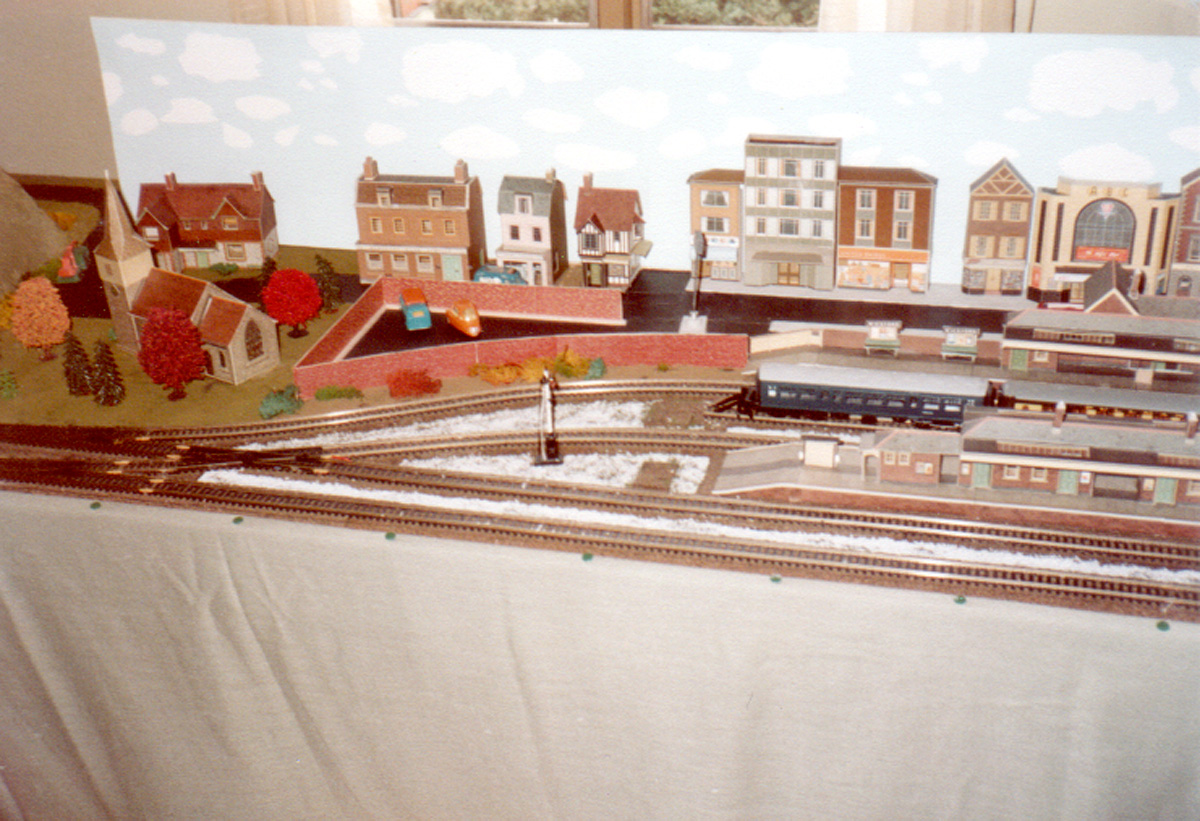 The far end of the town, and the village church. 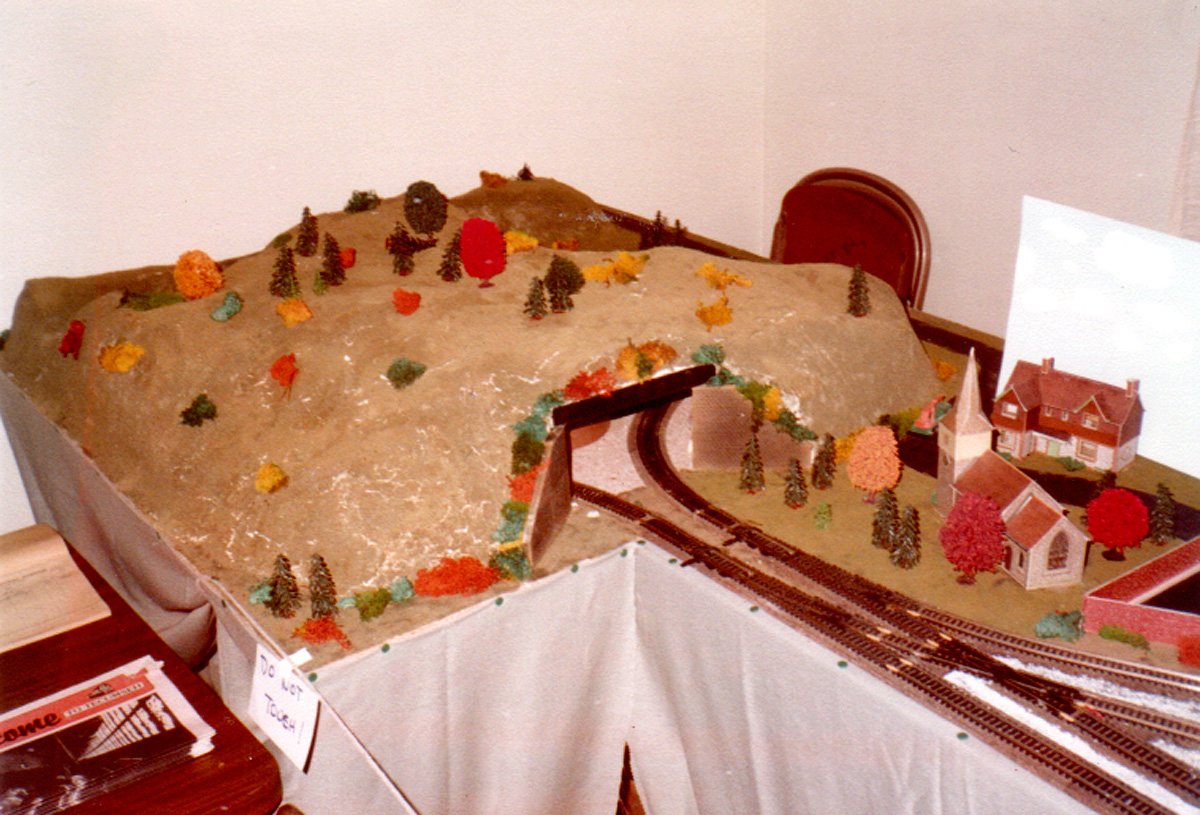 The turning loop, hidden in a tunnel. My scenery skills have improved since this time! 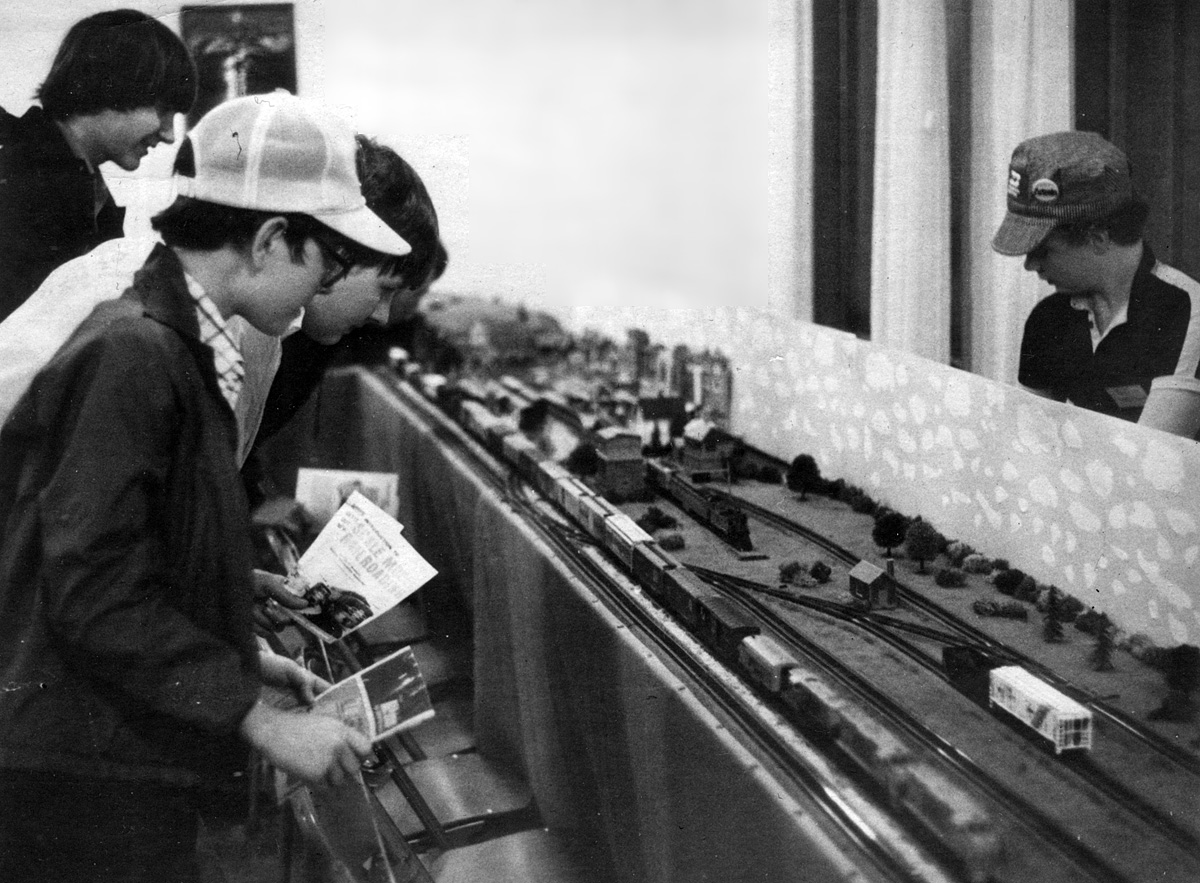 A “publicity” shot from that weekend. Dale Pape, the blog author, and Terry Bush look over the trains as Brad Barritt mans the controls. 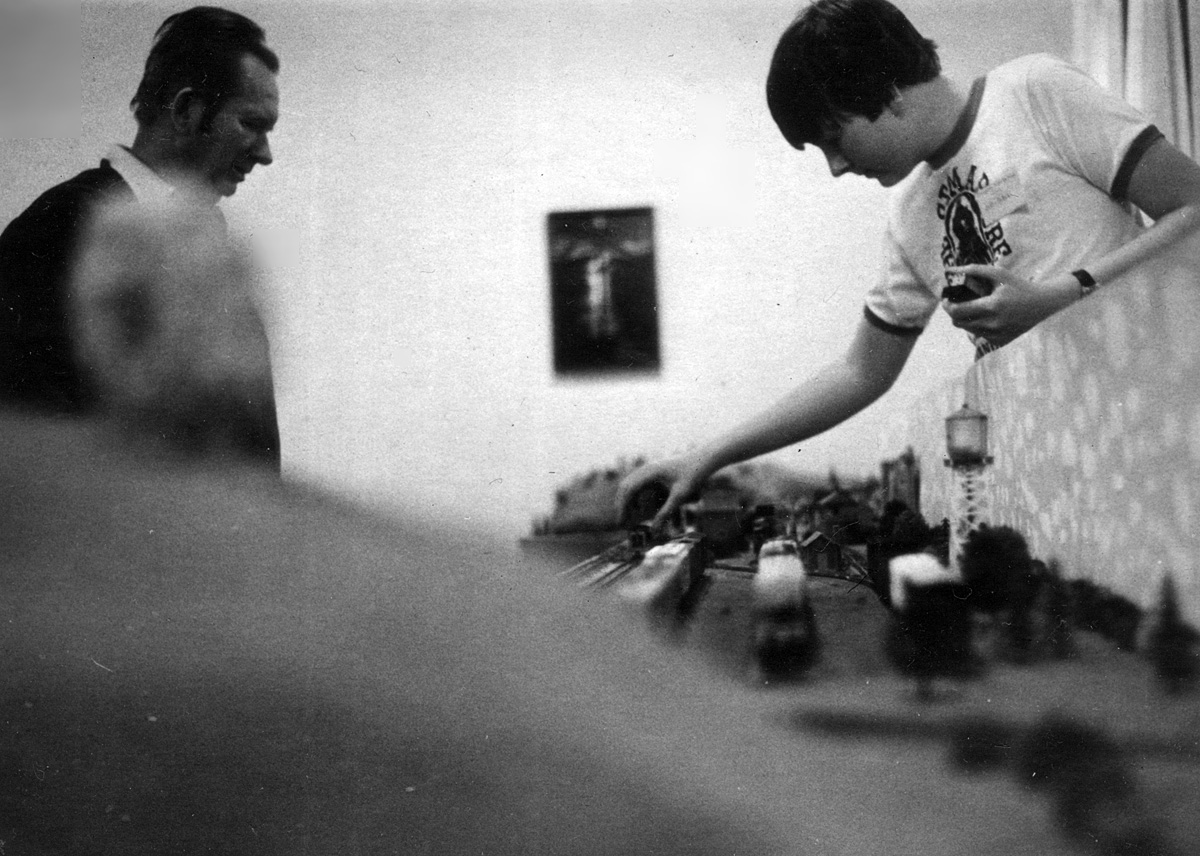 The blog author sets comes cars on the tracks as his father, Stanley Dobek, observes. Thanks, Dad, for your help and patience with me and my hobby! 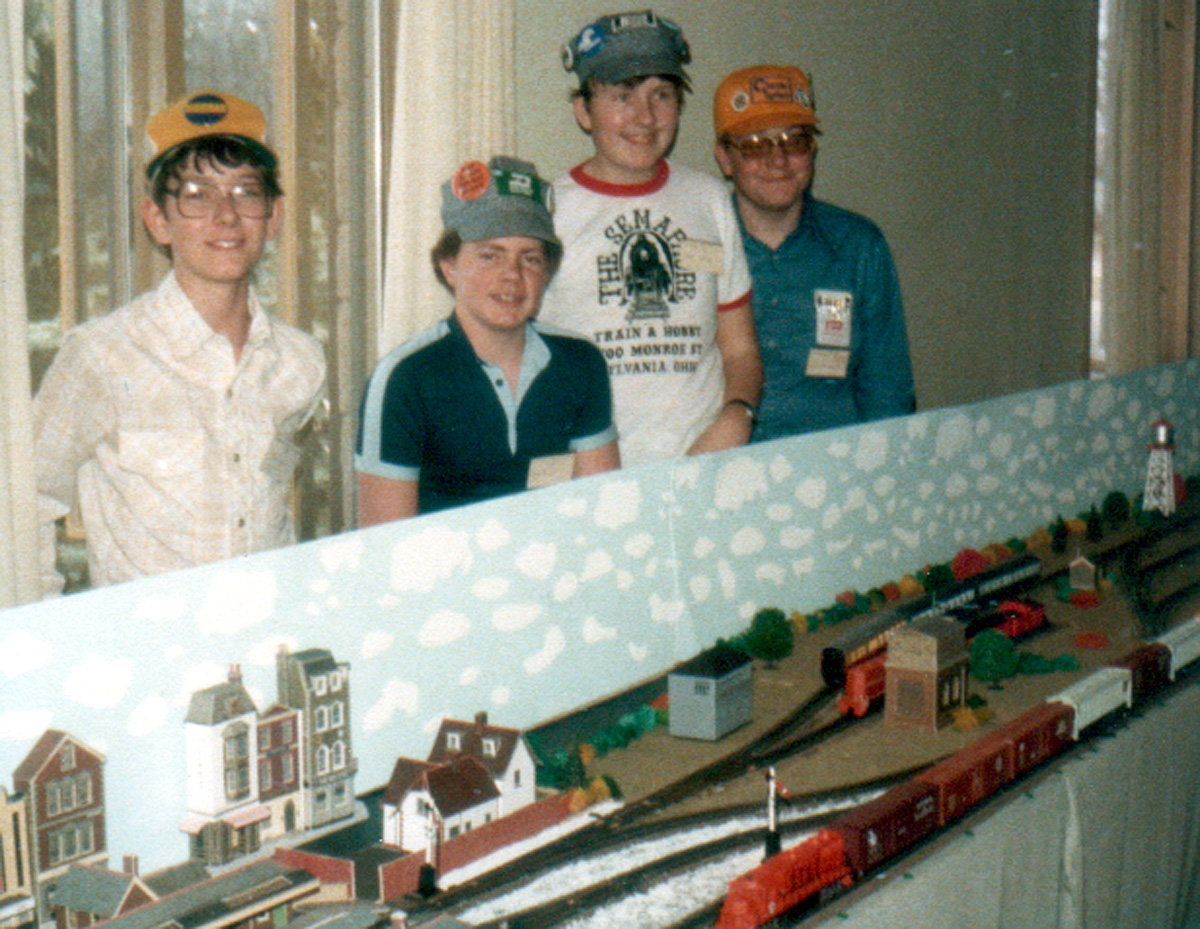 The British-American layout went on to be exhibited two more times in 1980—at Boysville in Macon, Mich., then in Britton, Mich. for the village’s sesquicentennial. After that it returned home; the tracks were torn up, but the framework was reused for the next layout…

The renovation of the display layout involved moving the main line tracks to the center of the layout, allowing sidings on both sides. The turning loops were maintained, but the mountains disappeared. Instead, the centers of the loops were used: a diesel house was installed at one end, while the other end had a freight house and a feed mill. A passenger station and platform was installed along the main line, and an interlocking tower looked over a removed diamond crossing. The only photos I can find of this layout show one of my Conrail locomotives and an RDC by the station: 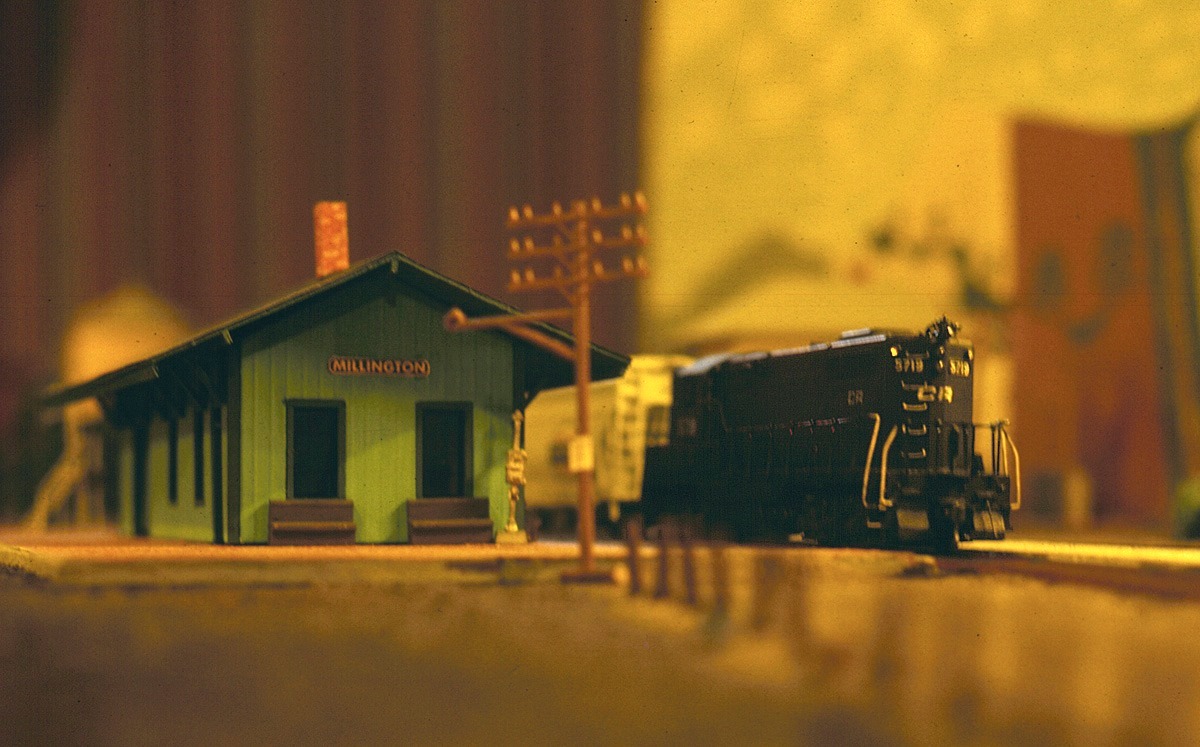 CR 5719 pauses by the Millington depot 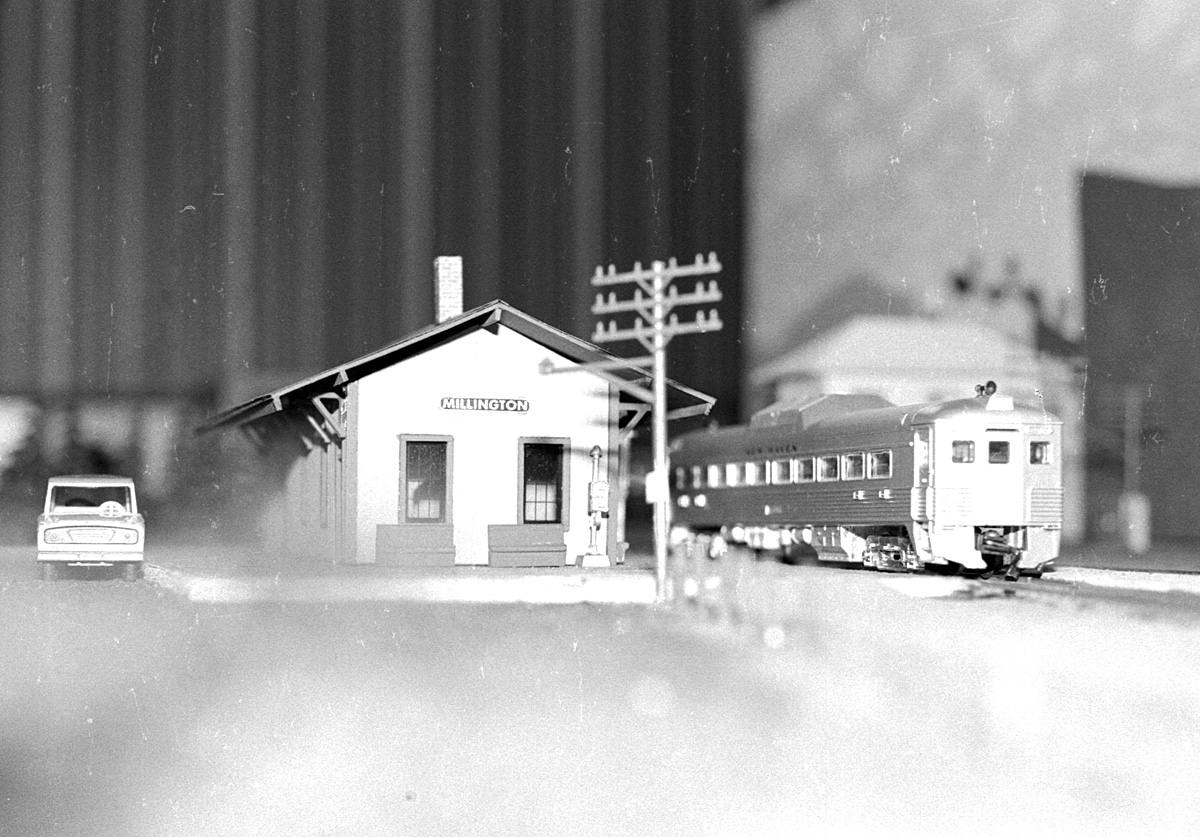 An RDC waits for passengers at the Millington depot

This layout had more advanced scenery and tracks than the British-American layout, and you could run long trains, but operationally it was rather unexciting. It never did go on exhibition and slowly fell into disuse in 1982-3 as I became more involved with real railroading at the Southern Michigan Railroad Society. In 1986 or 87, I gave the layout to a friend. The locomotives and cars went into storage.

After graduating from the University of Michigan, I moved around a bit while working for various railroads, first to Defiance, Ohio, then to Keokuk, Iowa, and finally to St. Louis, Missouri. It was in St. Louis that I decided to get back into modeling. I designed an L-shaped switching layout for the bedroom of my rented apartment. I built the benchwork and had started trackwork when I decided to buy a house. The layout was disassembled and moved the basement of the new house, where it was set up again. However, after that I did nothing else with it (lack of time/interest), and it was finally given away. This is the only existing photo, showing work on laying track on the layout at its original apartment location: 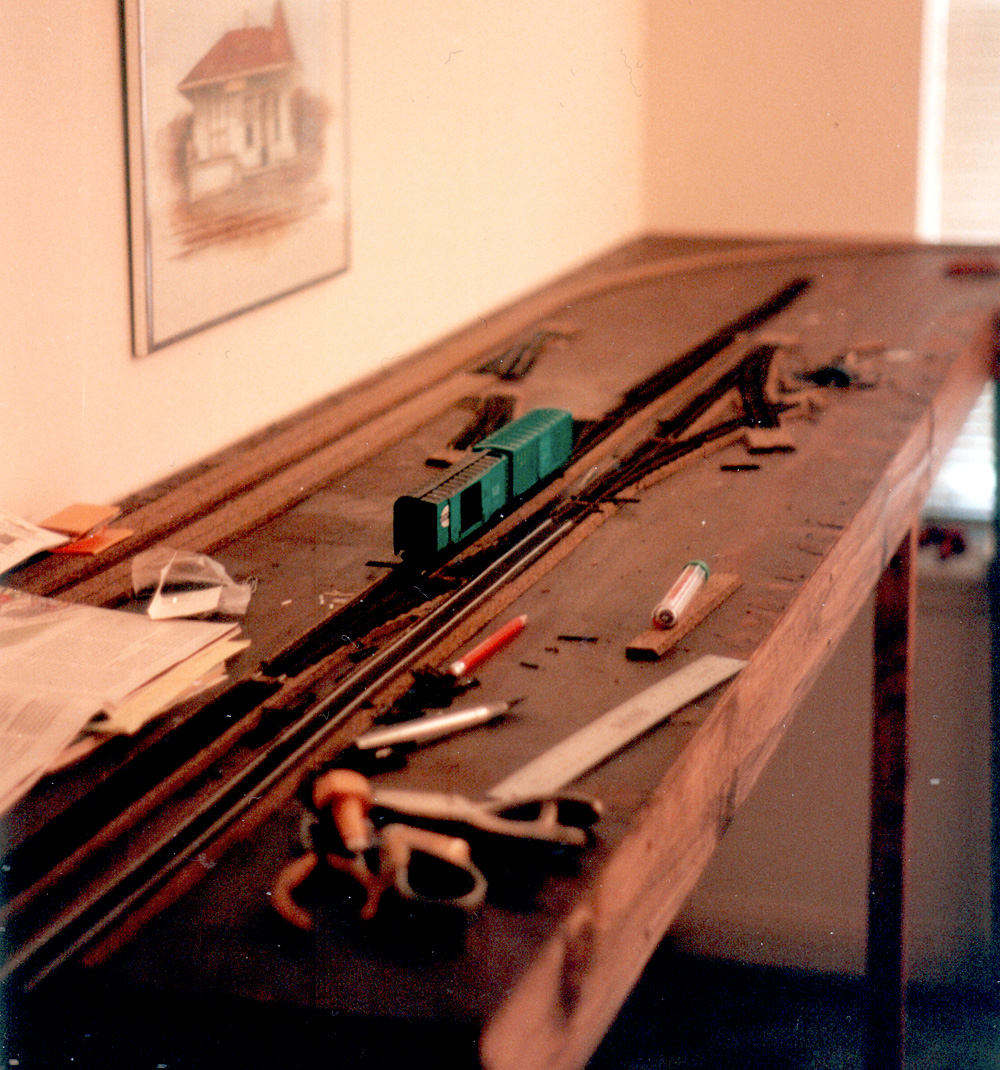 When I moved to Poland in the late 90s, I sold many of my locomotives and cars on eBay, but maintained a small collection of my favorites, which I sent to my new home in Europe. Some of these were displayed in small case mounted on the wall.

About 2010 a friend introduced me to a relatively-new model railway club in nearby Toruń, Poland, which had regular modular meetings (Toruńska Makieta Modułowa). A visit to one of their meets fired up my enthusiasm to have a layout again. My initial plan was to build 2 switching modules, but a move to a new apartment in 2011 finally gave me a spare room that I could use for a permanent layout!

Since the move, I have incorporated those two modules into a much-larger “L-shaped” switching layout, inspired by Doug Leffler’s “Lenawee Central Railroad”. The plan is to recreate a fictitious New York Central/Penn Central/Conrail branch line, based on the lines which existed in Lenawee County, Michigan, where I grew up. There will be a number of industries to allow extensive switching. 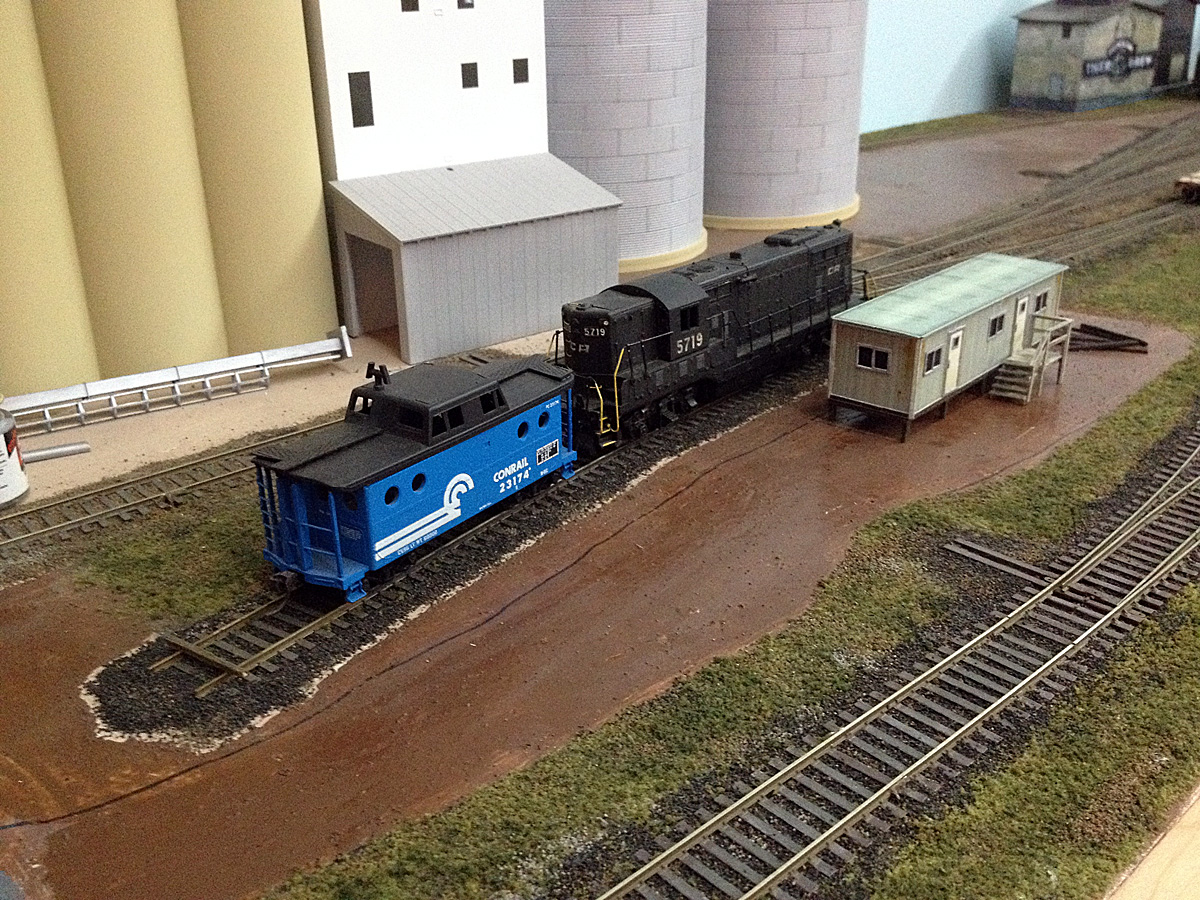 A short track and “crew shanty” for the switch crew on my home layout; note locomotive CR 5719—it appears in the 1981 photo above! 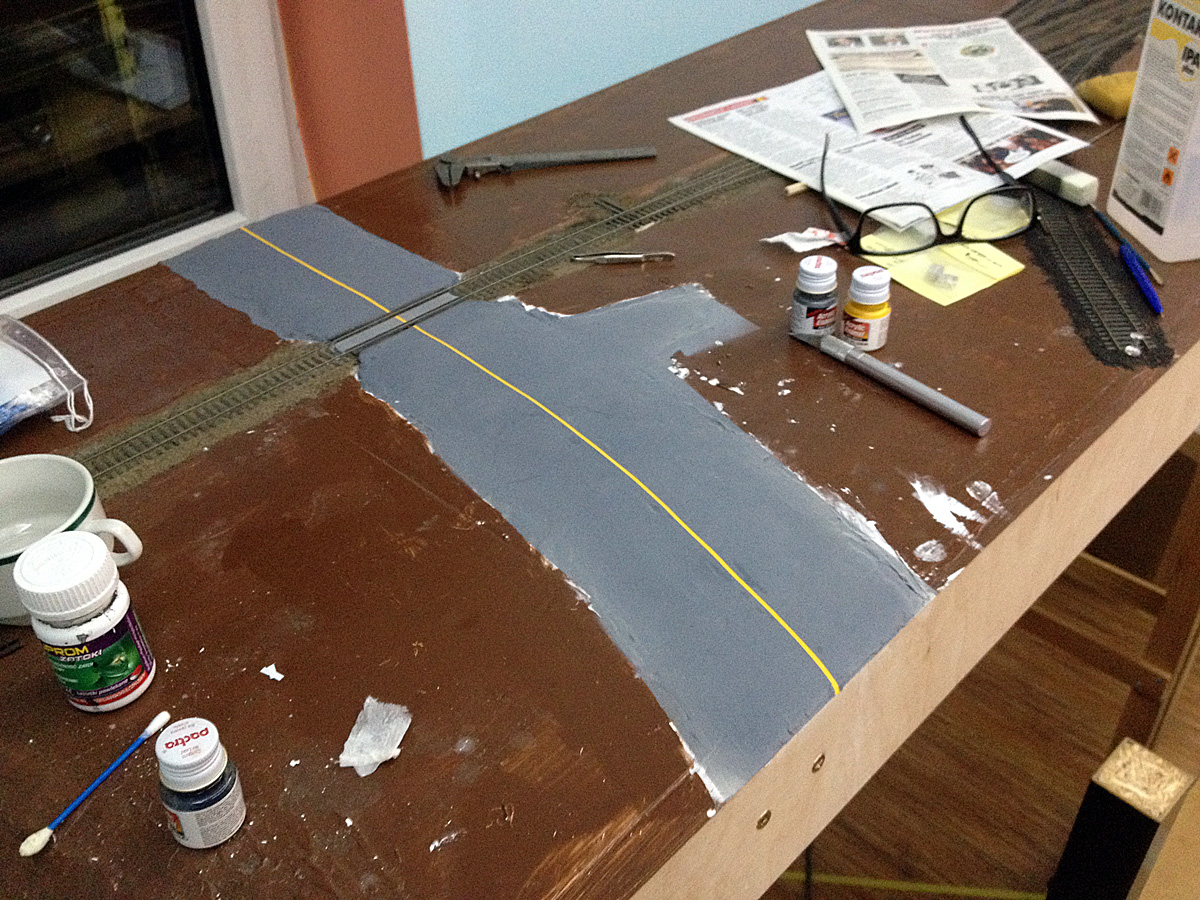 Working on a road crossing on my home layout 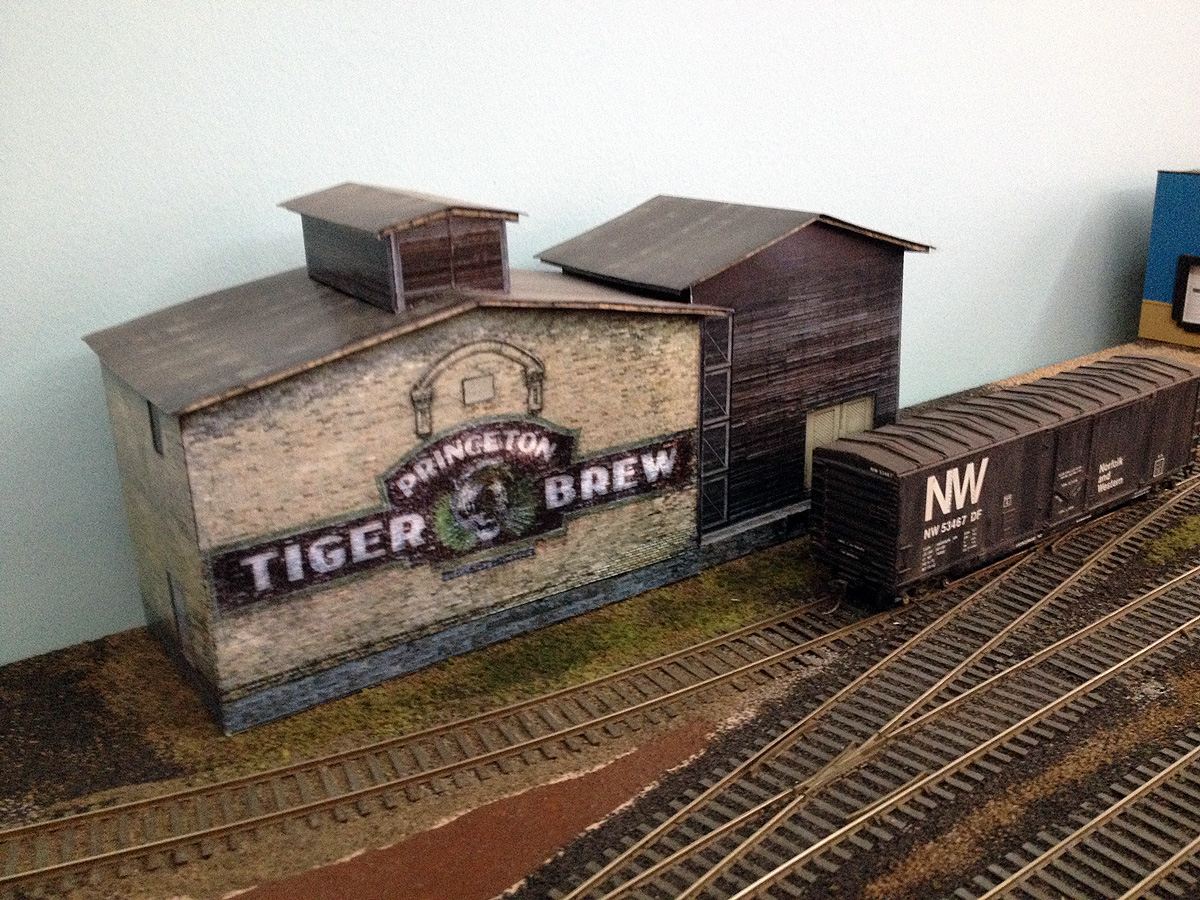 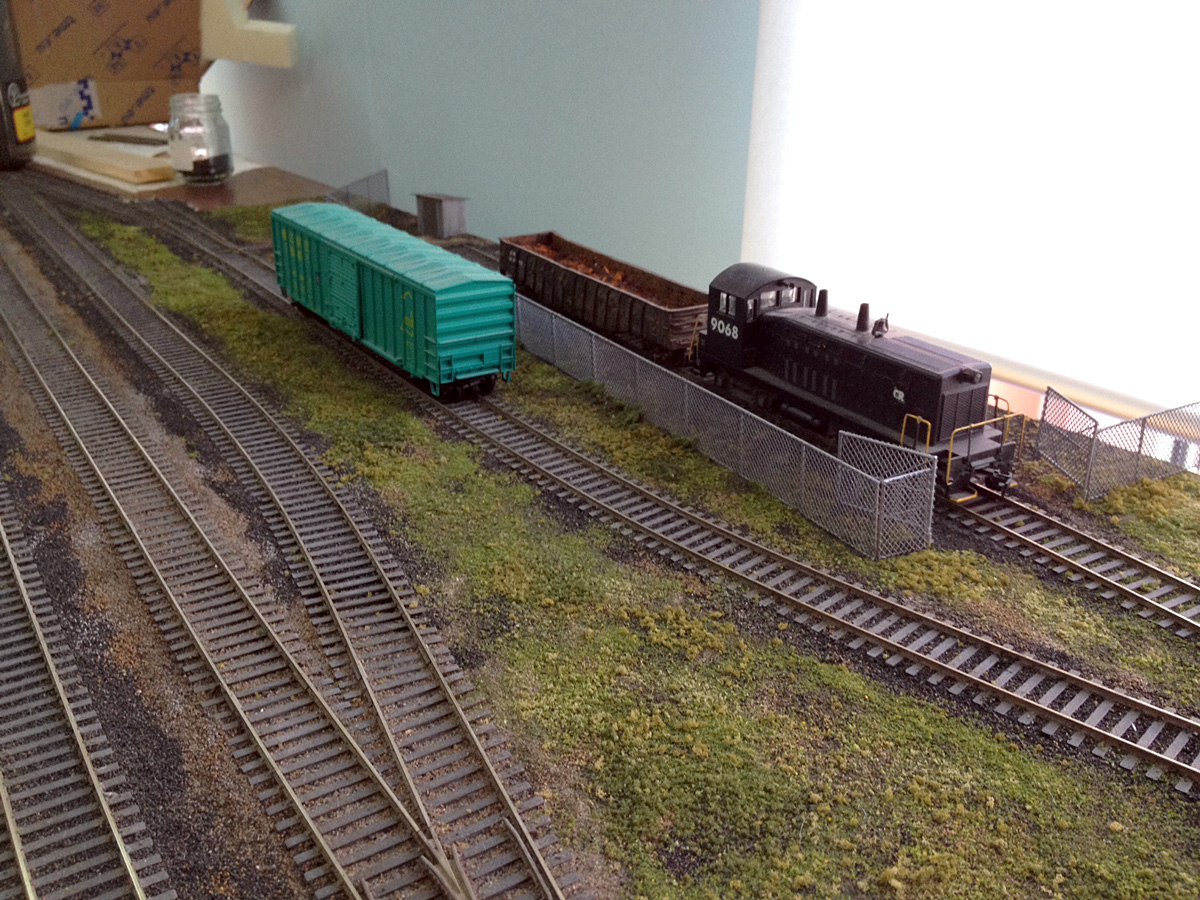 CR 9068 switching the scrap yard on my home layout. There’s that HCRC boxcar that appears on the 1995 photo above!

As construction continues, I attend most exhibitions of the TMM. I don’t have any modules, but they are tolerant of me running my American and Canadian equipment on their Polish-themed layouts! 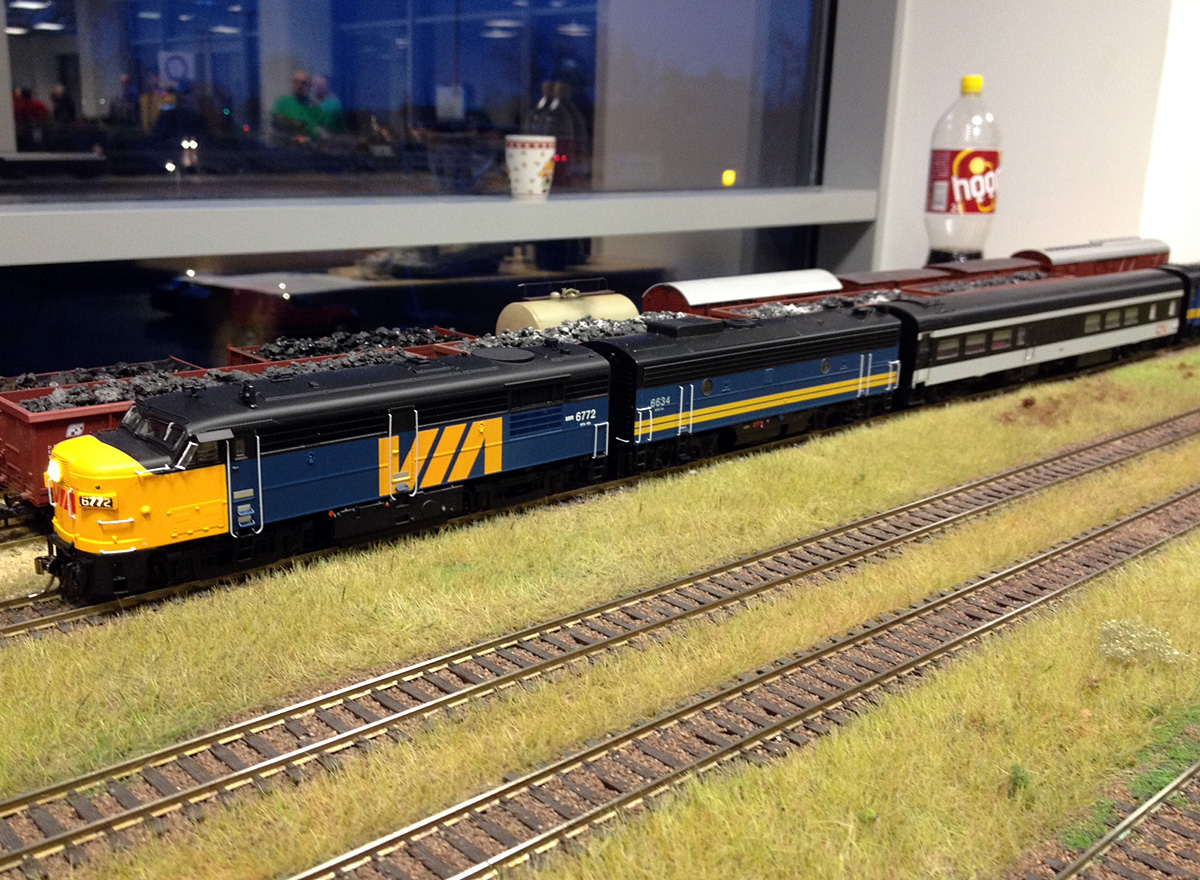 My VIA Rail Canada train on the TMM layout 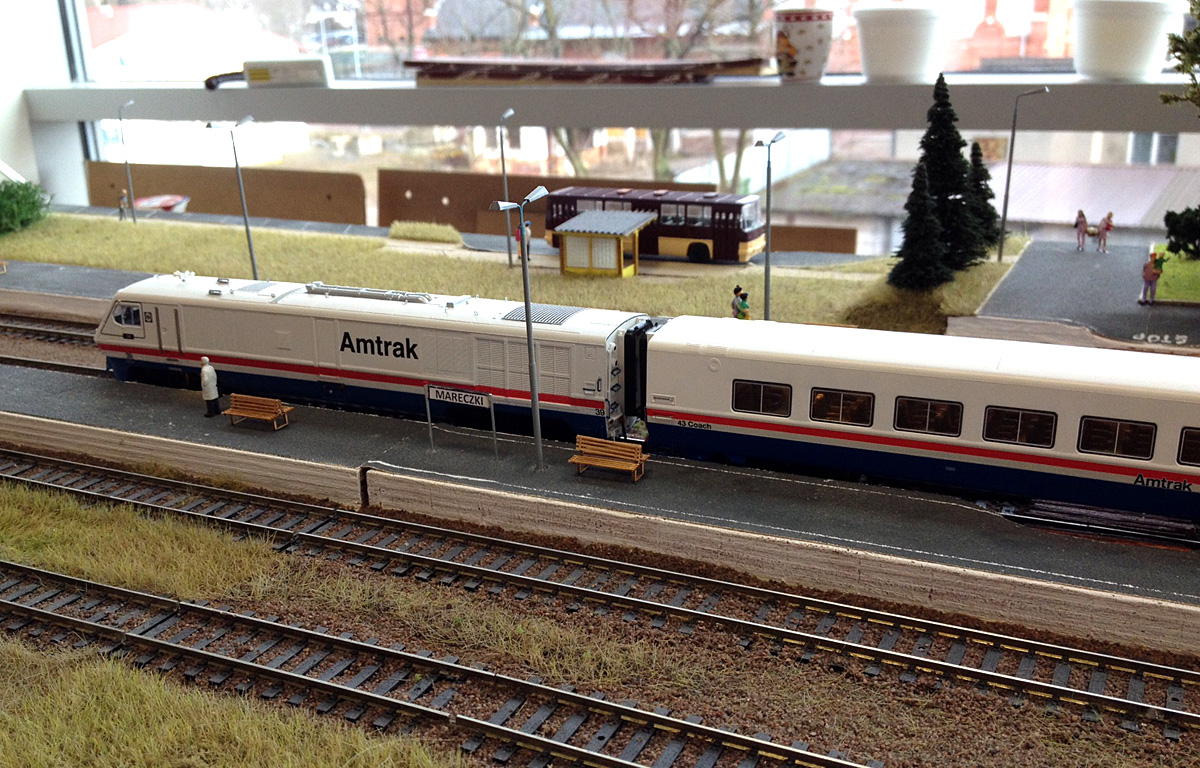 My Amtrak LRC train on the TMM layout

The model railroading “bug” I have had since I could barely walk remains with me today. My layouts have changed through the years, and I’m always learning new techniques and skills. My current layout is enhancing my scenery techniques, and I am learning to construct complicated building kits. I’m also learning to use DCC digital controls which were unimaginable in the 1970s. I hope that I have many years ahead of me in this hobby, and look forward to getting my home layout finished to a level that will permit regular operating sessions.