Conrail in Lenawee County—countdown to abandonment 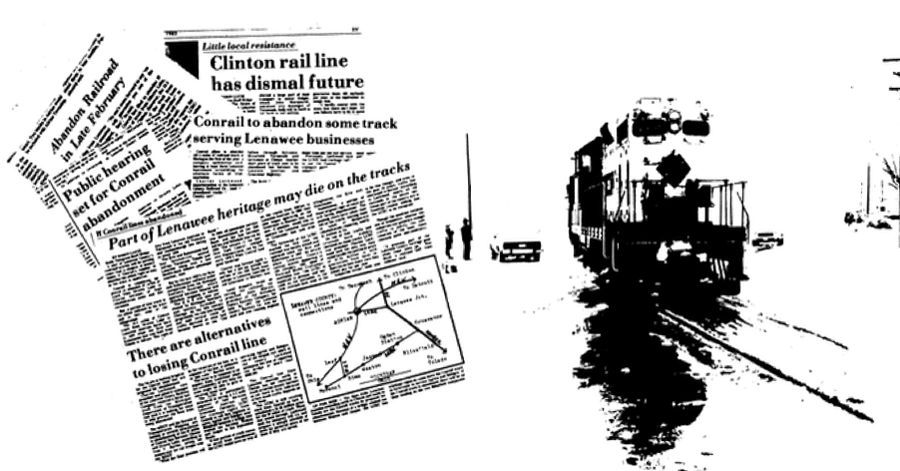 Throughout 1981, the possibility that Conrail would abandon its trackage in Lenawee County was a topic for the local media. The articles were published throughout that year, and provide a look back at the thinking and ideas being mulled at that time. Eventually the Lenawee Junction to Clinton line would be purchased by the Southern Michigan Railroad Society, and the State of Michigan would purchase the “Old Road” segment from Lenawee Junction to Riga for operation by the Lenawee County Railroad company.

Conrail may abandon track in Lenawee

Conrail, the federally-subsidized rail system which serves much of the Northeast and Midwest, May abandoned within the next three years 30.5 miles of secondary trackage in eastern Lenawee and southwestern Monroe counties.

According to a recently-released study by Conrail, the track between Vulcan near the Ohio border and Clinton, in northern Lenawee county, could be sacrificed in the rail systems effort to become profitable.

It is among the 1400 miles that Conrail proposes be studied for abandonment within the next three years. Conrail also recommends another 900 miles be abandoned within the next year unless shippers or state and local governments agreed to help pay the cost of running the unprofitable lines.

Conrail wants to abandon about 120 miles of track in Michigan within the next year, and has targeted another 51 miles for abandonment in the next three years.

That plan, however, could be thwarted by the Reagan Administration. The administration is opposed to a continuation of any federal subsidies for the 17,000 mile rail system, preferring to sell off the railroad’s profitable lines to private railroads.

Both Conrail and the U. S. Railway Association (USRA), which finances Conrail, have asked Congress to provide the rail system and additional $300 milltion to $400 million in federal aid to give it time to implement cost cutting measures in the 15-state system.

But the Reagan Administration, convinced that Conrail can never become profitable, has suggested dismantling the system and selling the most profitable lines to private railroads.

Conrail and USRA officials now are negotiating with shippers and local and state governments to determine whether they are willing to assume payment of subsidies required to keep unprofitable freight lines in operation. Even so, there is little doubt that many of the lines targeted in the Conrail report will be eliminated.

Since its formation in 1976, Conrail has received $3.3 billion in direct federal subsidies and $2.1 billion in other federal financial support.

To help stave off Conrail’s elimination, the USRA has recommended that the government allow the railroad to end commuter passenger services and labor protection provisions mandated when the system was set up in 1976.

In March, Conrail asked its workers for $200 million in wage and work rule concessions in each of the next five years. In addition, the cost-of-living increases would be deferred, crew size is reduced and some 10,000 jobs phased out.

Conrail plans to abandon 159.4 miles of railroad track in Michigan the first of the year, a company spokesman said, leaving at least three Lenawee businesses scrambling for alternative forms of transportation.

Charles Lockwood, superintendent at the Lenawee County Railroad Co., said the abandoned tracks in Lenawee County come up from Toledo, follow through Sylvania, Blissfield, Tecumseh and terminate at Clinton. Another short piece of track soon to be abandoned lies between the Lenawee Junction and Grosvenor Highway.

The Budd Company in Clinton and Sohigro and Agrico in Blissfield will be most affected by the lost trackage, Lockwood said, though many industries along those lines use the rail service.

Previously, Lockwood said the LCRR, had trackage rights to use the Conrail lines to transport goods to and from industries along the route. He said now the companies might be able to buy the abandoned tracks from Conrail, or LCRR could possibly buy the tracks if the companies could assure them of enough business to make the purchase worthwhile, Lockwood said.

Ed Jackson, manager of Agrico, said they receive about 75% of their incoming tonnage over rail during the peak business season in March and April.

He said he is glad the notice came at this time of the year to make it easier for them to try and change their transportation over to truck.

Roger Bortel, materials manager at the Budd Company, said he has not yet received the official word that their rail service will be cut off. He said the company has been studying alternatives if the tracks are abandoned but gave no indication of what they were.

According to Steve Lubetkin, of Conrail, “the lines produce chronic operating losses and need substantial rebuilding”, adding that Consolidated Rail Corp. of Philadelphia will inform the Interstate Commerce Commission by Dec. 1.

The commission is required to approve the abandonments within 90 days unless financial aid is found for the lines. The track is used by 14 freight lines. The largest section is the Elkhart mainline from Jackson to Three Rivers—68 miles

Lockwood said he has heard conflicting stories about Lenawee County’s tracks. If the tracks from Toledo to Clinton are abandoned that would total 38 miles. However, if the tracks are abandoned only from Ottawa Lake to Clinton, 26 miles would be lost.

The abandonments are part of Conrail’s plans to halt service to nearly 2000 route miles in 13 states.

The company was created by Congress in 1976 because of the bankruptcy of Penn Central and six northeast railroads.

There are alternatives to losing Conrail line

The future is looking brighter for the Conrail lines that are proposed for abandonment.

Charles Lockwood, vice president and general manager of the Lenawee County Railway Company, received a letter last week from the Michigan Department of Transportation that said it was looking for ways to help prevent the lines from being abandoned.

The MDOT and the Bureau of Transportation Planning are looking at several alternatives to abandonment of the 27 miles of Conrail line between Clinton and Ottawa Lake, according to Ivan V. Bartha, acting administrator for rail freight with the MDOT.

“What the final decision will be for retention of the line, or a segment of the line, is unknown at this time,” Bartha wrote.

The letter is in response to an inquiry from Lockwood about the availability of any help the state might be able to give in securing these lines.

The LCRC is particularly interested in saving a 4.3 mile segment of line between Lenawee Junction and Grosvenor. Currently, LCRC has trackage rights from Conrail to use that segment to serve Agrico and Sohigro near Blissfield because a bridge was washed out between Weston and Jasper in the September floods.

If that portion of track cannot be saved from abandonment, the LCRC would have no way of servicing Agrico and Sohigro, two of the largest rail users in the county. Lockwood estimates the cost of repairing the bridge at more than $200,000.

The Conrail line from Lenawee Junction north to Clinton has not received as much attention mainly because as yet there is a little information of how much traffic depends on the line.

The LCRC is still awaiting word from Conrail on how it calculated the $1.25 million price for the 27 miles of track. When that comes through, Lockwood said the company will try and prepare a sample schedule of costs for the potential users of the lines if they are saved.

A part of Lenawee County’s railroad system will be nothing more than a chapter in history books if Conrail‘s request to abandon the oldest right-of-way in the state is approved.

Conrail is requesting approval to abandon 27 miles of track from Ottawa Lake to Clinton because of high rehabilitation costs and low revenues.

But, a portion of the track is the oldest railroad in the state and in fact, west of the Alleghenies.

The 13.4 miles of Conrail track from Ottawa Lake to Lenawee junction dates back to 1837 when the Erie and Kalamazoo line was built from Toledo to Adrian. The right-of-way from Lenawee Junction to Tecumseh is the old Palmyra and Jacksonburg line dating to about 1840.

The Erie and Kalamazoo had four locomotives, named Adrian, Tecumseh, Toledo and Lenawee along with a few double0deck wooden passenger coaches, then.

By the late 1840s, the Erie and Kalamazoo suffered under competition from the Michigan Southern Railroad, which operated between Monroe and Hillsdale, stopping in Adrian.

The E & K was soon purchased by Michigan Southern and quickly extended to Chicago. As the 19th century progressed, the line was bought and sold several times as traffic declined on what had become known as the “Old Road.”

In 1956, all passenger service was discontinued on the Old Road, and the line between Adrian and Hillsdale was cut by 1962. The owners of the line, New York Central, merged with Pennsylvania, but by the early 1970’s Penn Central had gone bankrupt.

Conrail was formed April 1, 1976, but it did not include the portion of the Old Road from Adrian to Lenawee Junction or the Grosvenor to Morenci line.

Local shippers, intent on saving the railroad, approached John Marino, President of the Hillsdale County Railway Company, for help. By 1977, the Lenawee County Railway Company was formed and was running engines on the tracks from Adrian to Lenawee Junction. In 1980, they also began operating on the Grosvenor to Morenci line, and now, if possible, would like to operate the Lenawee Junction to Grosvenor line and even more.

The formation of the LCRC marked the first time the railroad was locally owned and operated since the Erie and Kalamazoo in 1837. An article about Lenawee County’s railway system appearing in the January, 1981 issue of Railroad Model Craftsman, concludes that “the LCRC is expected to prosper and succeed as the successor to the first railroad built west of the Alleghenies the Erie and Kalamazoo.”

Nonetheless, a portion of those original right-of-ways are still facing abandonment. The passing years have taken their toll on the tracks, leaving them in need of desperate rehabilitation requiring nearly $1 million to fix.

On top of that, traffic and revenues have steadily declined on those tracks. LCRC Vice President Charles Lockwood said the only way they could handle the purchase price of $1.25 million is with guarantees from local industries on how many cars they would pay for per year.

Industries haven’t been able to do that though, and even in the past 10 years, traffic has continued to decline. According to Lockwood, nearly all the railroads in the entire Northeast part of the country are in financial trouble, adding that the LCRC is no exception.

Though the question remains one of economics, whether the industries can generate enough traffic to justify the continuation of the lines, there remains some sentimentality.

“A precious part of the Lenawee County heritage goes when these lines go,” Wes Boyd, a railroad buff from Addison, said. 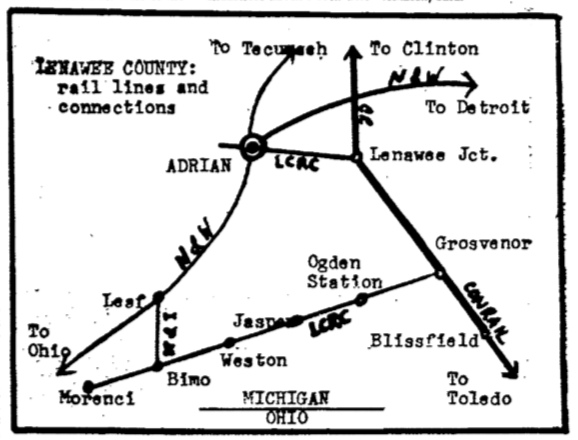 UP FOR GRABS—The lines from Lenawee Junction extending north to Clinton and south to Toledo are the Conrail tracks to be proposed for abandonment. Because of a bridge washed out between Weston and Jasper, the LCRC has trackage rights down the Conrail track to Grosvenor to service Agrico and Sohigro. If the Conrail track is abandoned, there will be no lines leading to the two Blissfield companies. (Adrian Daily Telegraph graphic)

Thank you to Phyllis Rickard for helping me locate these old articles.