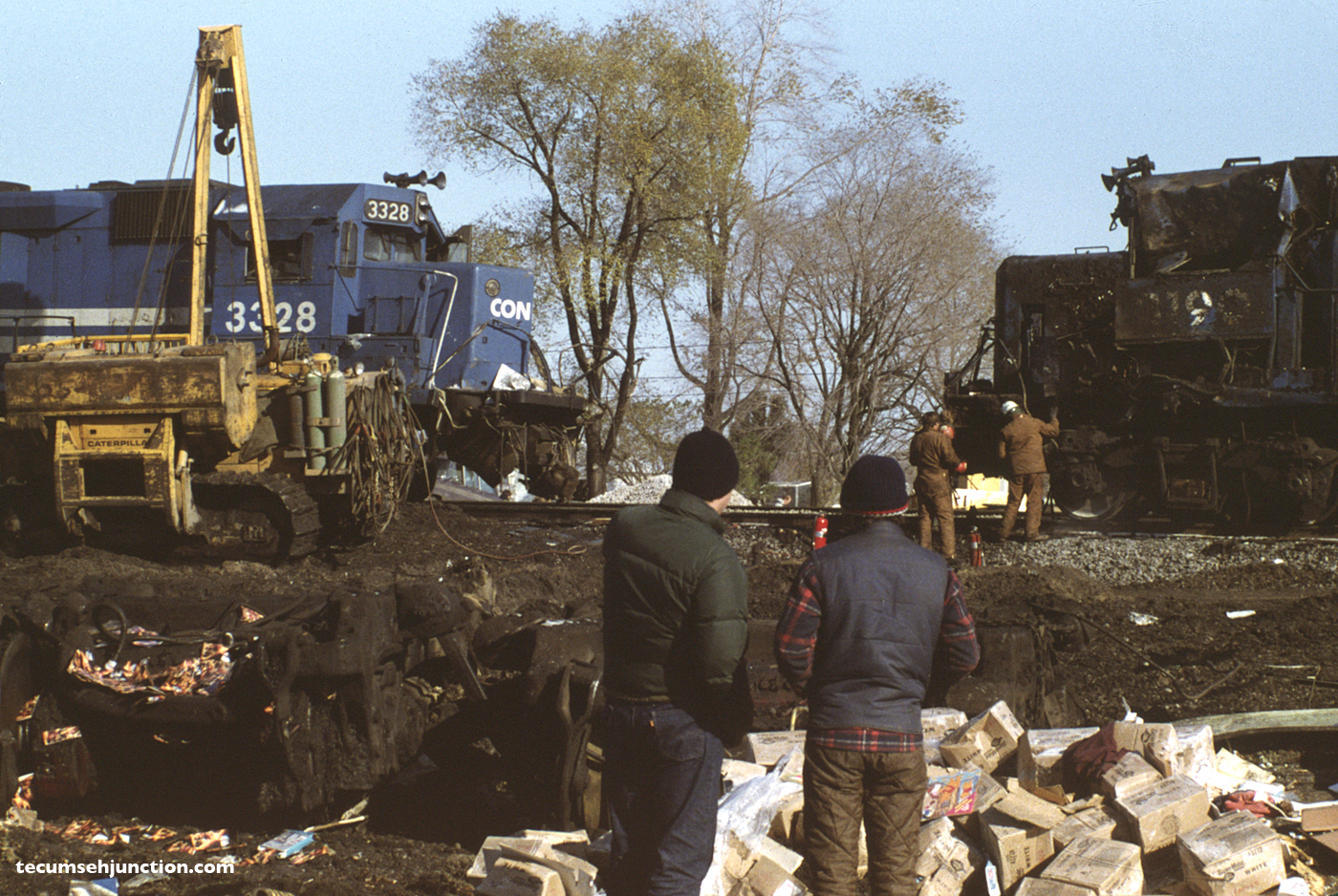 Mail and parcels from wrecked trailers lie on the ground as crew re-rail the locomotives involved in the accident.

On the evening of Friday, 11 November 1983, I heard on the news about a major Conrail accident at Millbury, Ohio, just east of Toledo. The next day I happened to be in Toledo with my parents, and so I drove over to Millbury to check out the scene.

It was a mess. A city street ran alongside the tracks and the wreck site, and there was no cordon or security preventing access at that point. Cleanup efforts were well underway, but the wrecked locomotives, freight cars, and scattered packages were very much evident. Trains were already passing the site, using a shoo-fly track that had been quickly constructed.

The wreck had occurred at 11:22 a.m. on the 11th, when eastbound van train Mail-8, led by Conrail #3190, ran into the rear cars of westbound train OIEL-9, which was crossing over from #2 to #1 track, in front of it at Millbury. Initial reports indicated that the some cars on OIEL had derailed on the crossover, but the FRA accident report only lists the probable cause as a missed signal indication by Mail-8, possibly due to icing obscuring the signal in a snowstorm.

The head brakeman on Mail-8 was killed in the collision and the engineer seriously injured. Two other crew members on the mail train received minor injuries.

Costs of over $1.5 million in equipment damage alone were reported.

Below are the photographs I took about midday on 12 November 1983 showing the cleanup efforts, followed by press clippings from the time with further coverage of the accident. 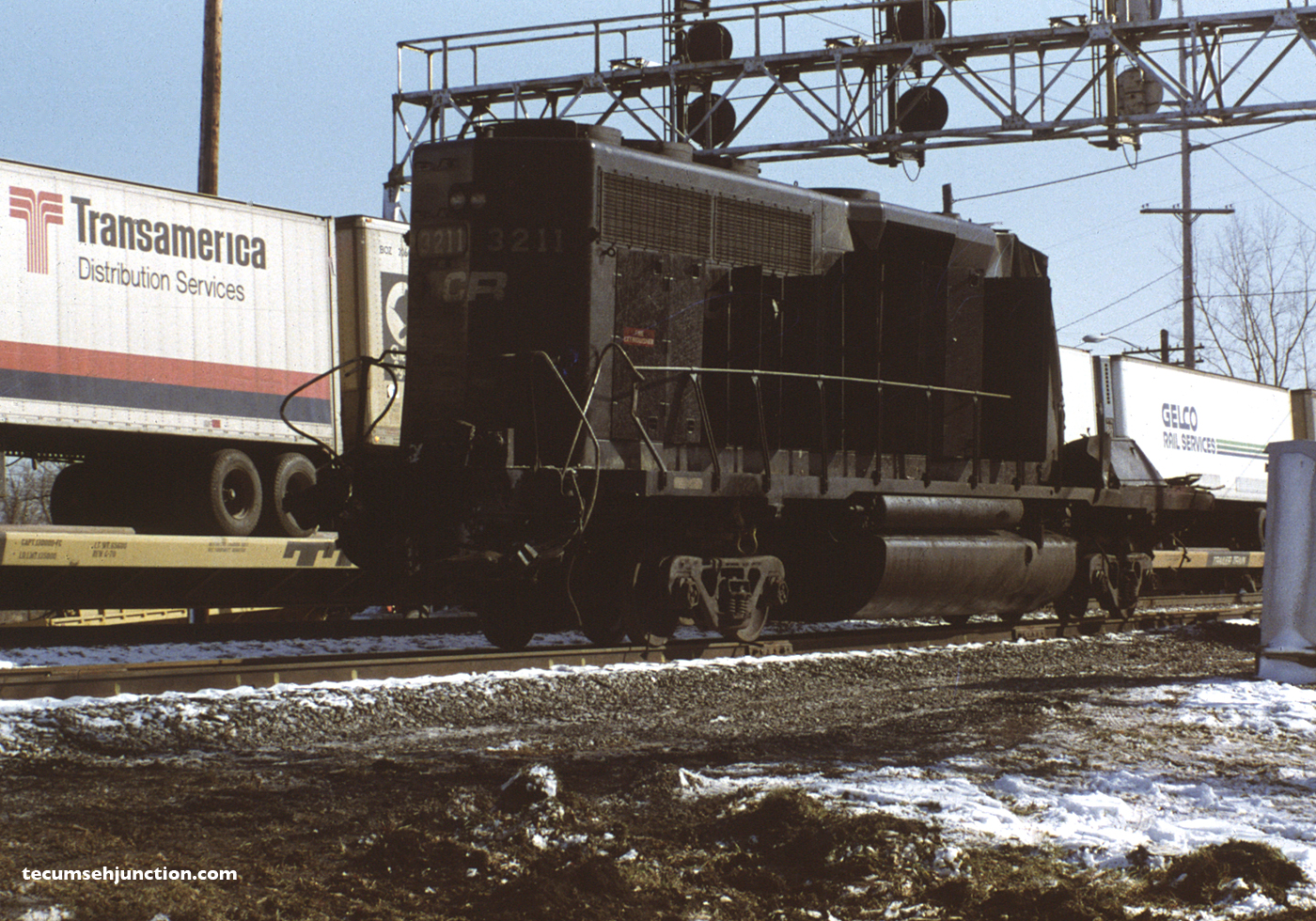 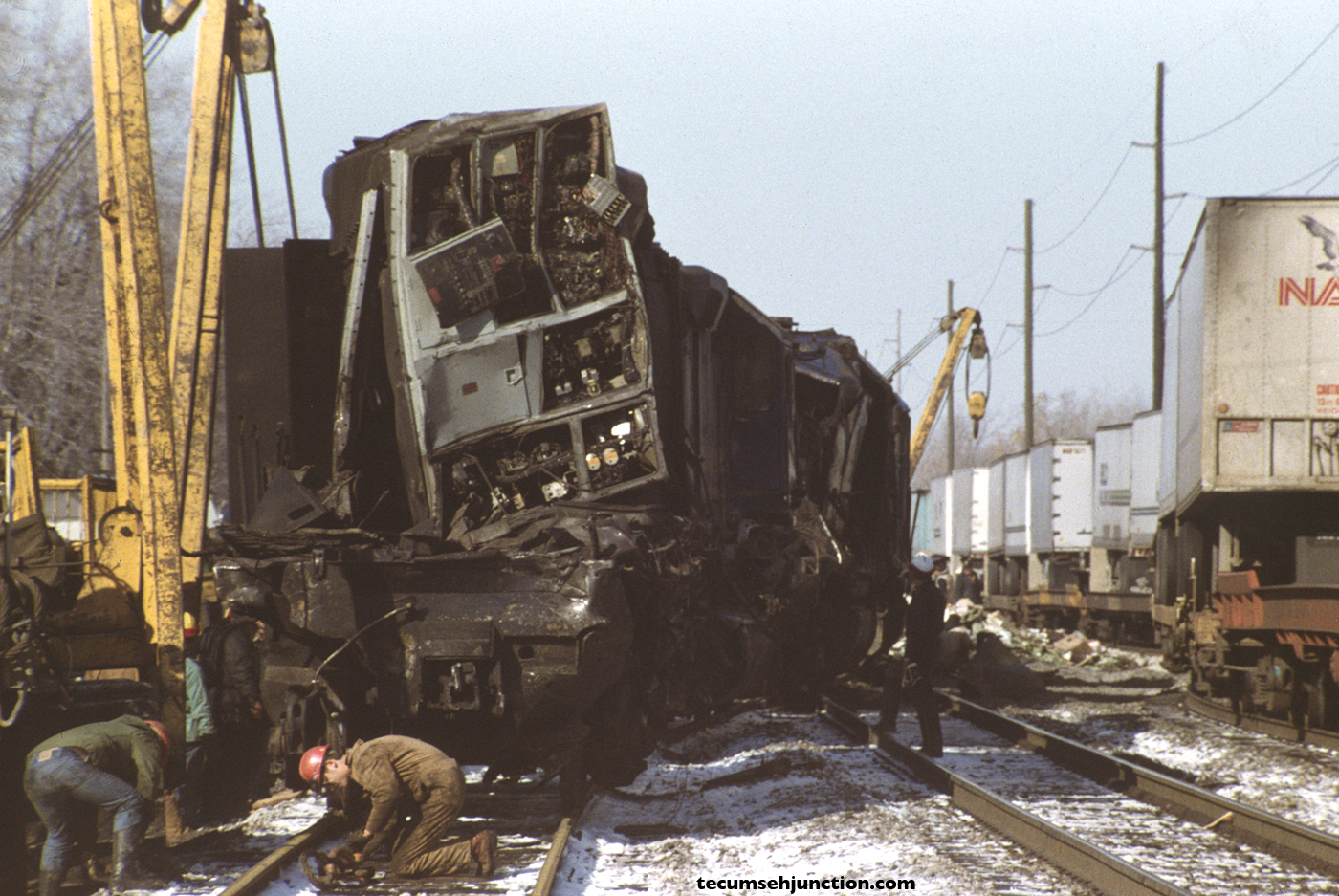 The remains of Conrail #3211, as a van train passes on the shoo-fly track. 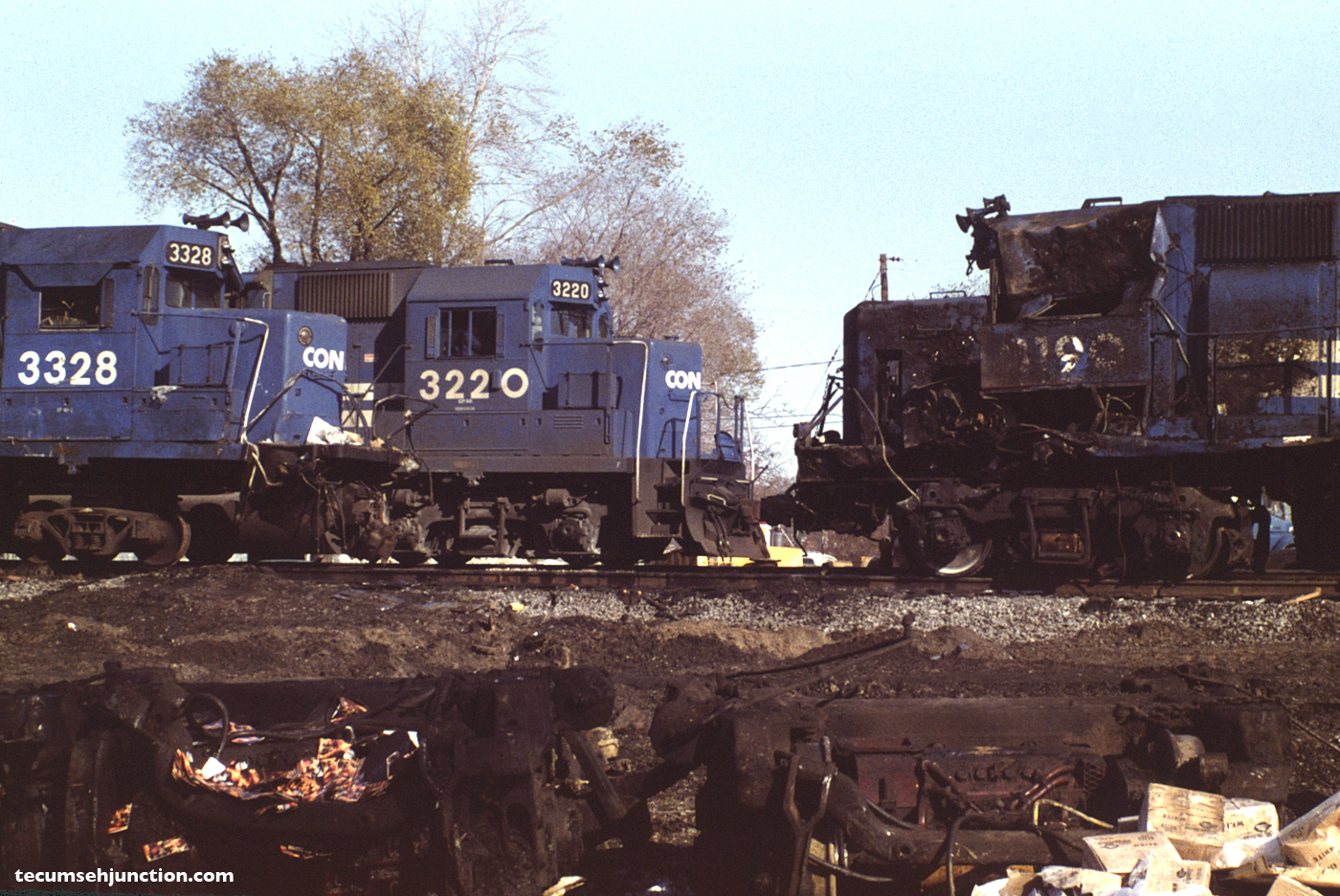 Conrail #3220 leads the next day’s train Mail-8 past the wreck site on the shoo-fly track. 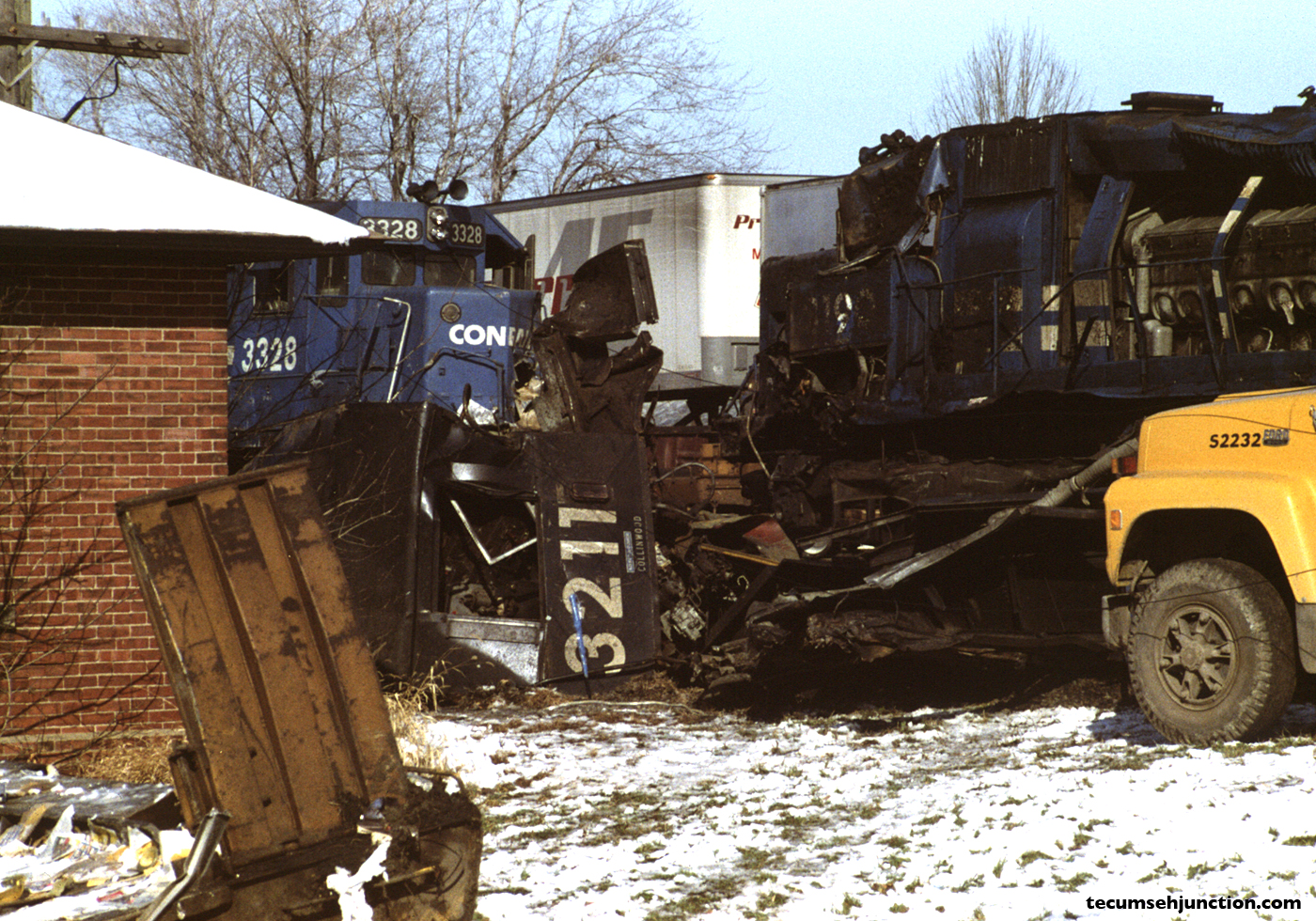 The crumpled remains of the cab of Conrail #3211. 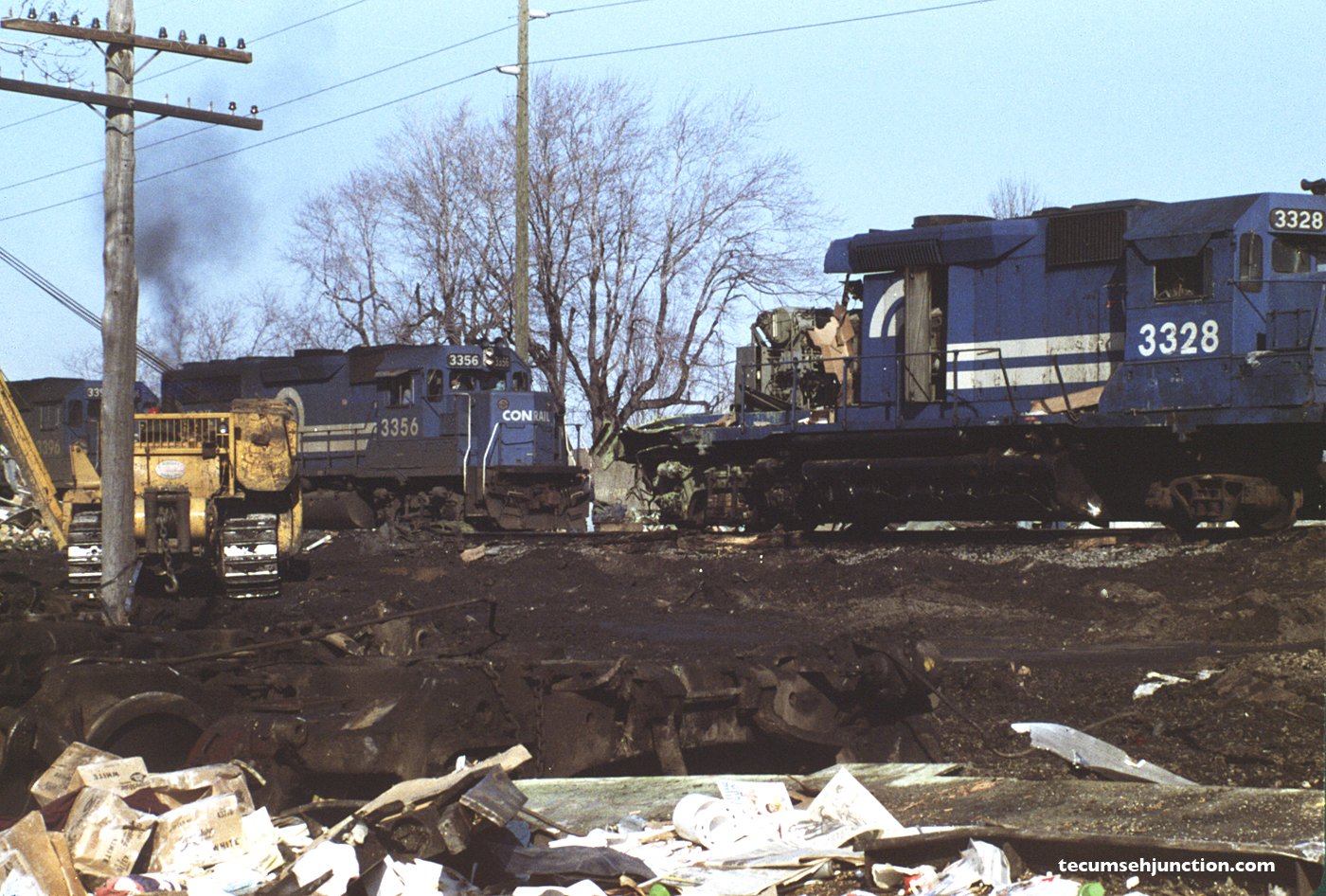 Conrail #3356 leads an eastbound train past the wreck site. 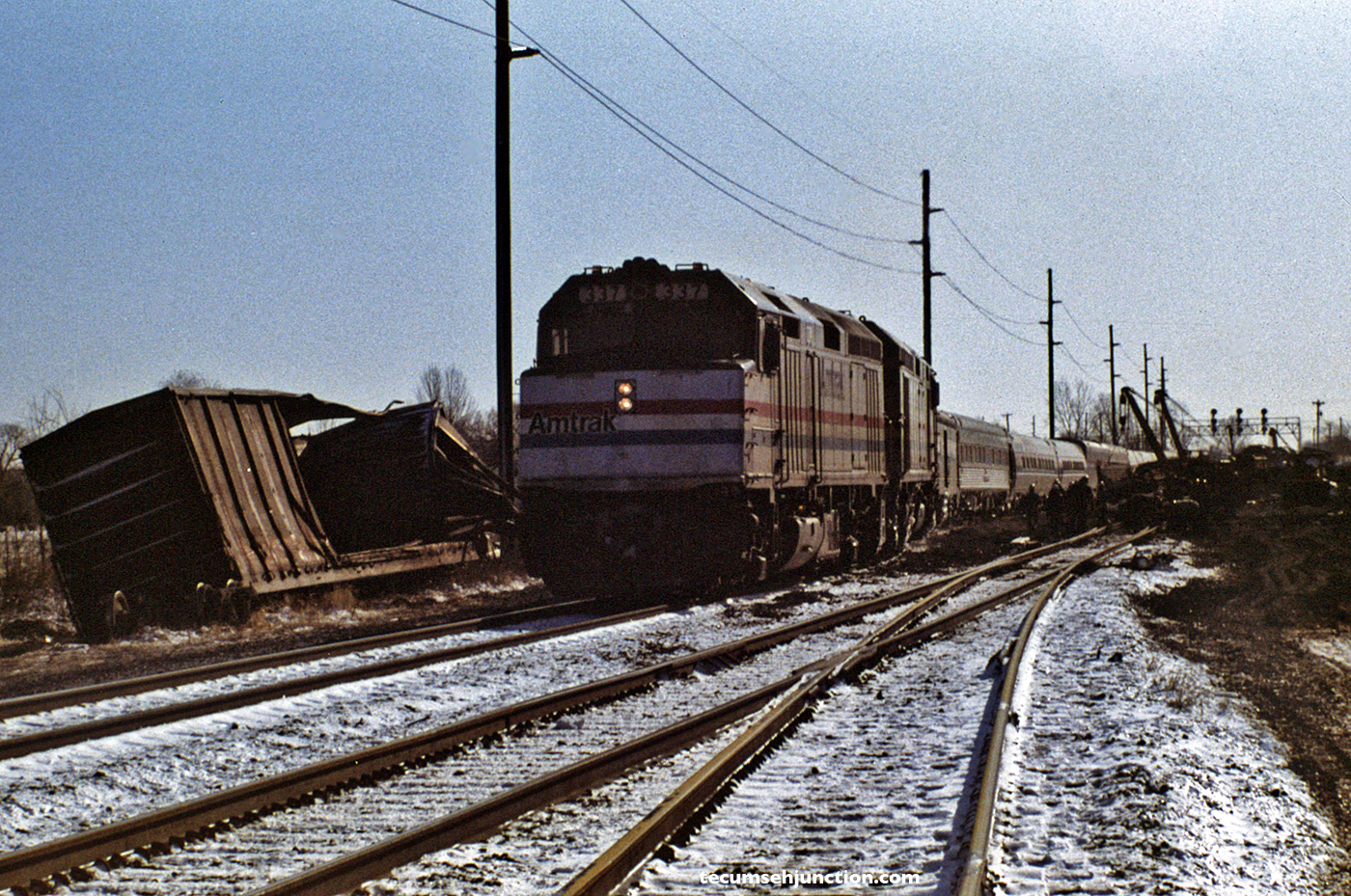 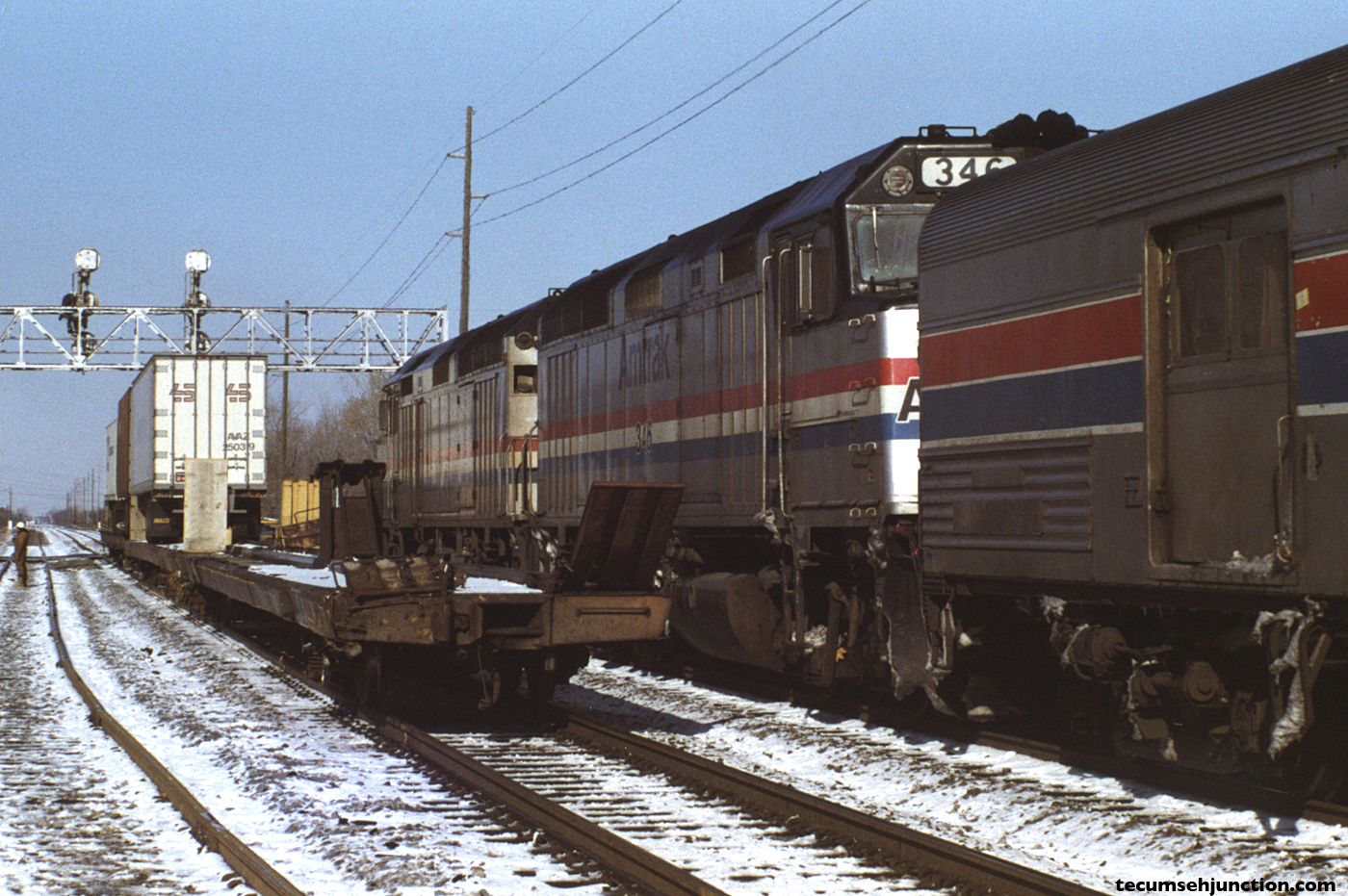 First newspaper report of the collision:

One man was killled and three were injured, one seriously, Friday when an eastbound Conrail mail train struck the derailed cars of another train in Millbury, throwing wreckage hundreds of feet.

All of the injured men were crew of the mail train, which collided with some 14 derailed cars of a Conrail freight train about 11:25 a.m.

A Conrail spokesman said the exact time and cause of the first derailment is unknown, but that the two incidents are believed to have occurred within minutes of each other.

The spokesman said he did not know how crewmen on the second train could have been unaware that a derailed train lay in their path.

Dr. Harry Mignerey Lucas County coroner, said it too about 25 minutes to free Mr. Carroll, head brakeman aboard the mail train from the wreckage. An autopsy was ordered.

Leonard Knauf, 60 of Alliance O. A brakeman and Jack D Young, 59, also of Alliance, a conductor, were treated for minor injuries.

Each train was carrying four crewman, a Conrail spokesman said, adding that the names of unhurt crewmen were not available.

Mark Warner, of 28415 Oak St., Millbury, a member of the Millbury fire department and one of the first persons on the scene, said: “There was mail scattered throughout the area. It was a mess, just an outright mess, that’s all.”

The crash left the derailed cars piled on top of one another like jagged pack ice, an image reinforced by snow falling as rescue workers clambered across the broken and twisted wreckage.

Boxes from one of the mail cars were strewn along the tracks some of them broken open. Orange tennis balls, stark against the white snow, had fallen from broken packages. Office forms lay sodden on the road.

Another train crash occurred in Millbury, which is about 13 miles southeast of Toledo, in January, 1976. Then, 20 homes were evacuated after 11 cars of a freight train, one of them a tanker containing potentially hazardous materials, derailed. There were no injuries, and residents returned to their homes the same day.

The freight train involved in Friday’s crash was traveling from New Jersey to Elkhart, Ind. the mail train from Chicago to South Kearney, N.J., Mr. Holloshutz said. The freight train was listed as carrying general freight.

The mail train’s speed at the time of the crash was unknown, but one Conrail worker said trains on the track could travel up to 65 mph.

No hazardous material was aboard, Allan Franks, a spokesman for the Ohio Environmental Protection Agency, said, but several thousand gallons of diesel fuel spilled when a tank ruptured.

A utility pole supporting a 69,000-volt electric line serving Geneoa was sheared off in the collision. Cindy Naegeli, Toledo Edison Co. spokesman, said but no outages occurred. Power on the line was turned off, so the pole could be replaced.

As onlookers milled about, residents of South Avenue, whose homes face the tracks recalled their first awareness of the crash.

Marilyn Schwarnberger, of 1749 South said she was sitting in her living room about 11:30 a.m. when “I heard a loud crash. I knew when I heard all that screeching metal – I knew it was more than a car.” she said.

Her son, Eric, of 1741 South, said: “I was sleeping and it sounded like all hell broke loose. I got up and looked out the window and there was that pile of trains and metal and whatnot.”

Charlotte Rapp, of 1755 South, said she was in her sitting room when the crash occurred and “heard a rumble. It felt like an earthquake.”

She said she went to a front window and remembered seeing “an engine coming toward the house.”

Conrail officials were on their way to the scene late Friday to investigate the cause of the crash.

Conrail, local police, and U.S. Postal Service authorities guarded the wreckage Friday night until a decision could be made about what to do with the mail.

Follow-up article the next day:

The normally quiet village of Millbury resembled a war zone Saturday as scores of men used heavy equipment to clear wreckage from the scene of a train crash that killed one crewman and injured three others.

Conrail officials said they are still trying to determine how an eastbound mail train slammed into cars of a derailed westbound freight in the town, about eight miles southeast of Toledo.

The two trains were on parallel tracks.

A Conrail spokesman said both lines were cleared to traffic by 4 p.m. Saturday, although some trains were routed around the scene on a temporary track.

Most of the wreckage of the 34 cars and four shattered locomotives was hauled away from the double-track main line by Saturday afternoon.

The main line through Millbury handles most of Conrail’s freight business between the Northeast and Chicago.

The mail train consisted of flatcars carrying two semi-trailer trucks each and about 10 trucks were crushed and split open.

Manny Demell, Toledo terminal manager, said some mail was being reprocessed in Toledo, and some was being forwarded to its destination by outside trucking contractors.

The mail was a mixture of all classes of mail and parcel post. Mr. Demell said, adding that “there will definitely be some mail lost.”

Mr. Demell said none of the mail was from or to Ohioans. Workers are expected to be at the site until sometime Monday, he added.

Bob Schwamberger, who lives on a street next to the tracks, said he heard the first derailment, and then the second train crashed into the derailed cars.

He said his wife, Madelyn, who was near a window, told him the freight-train cars had derailed while moving on a crossover from one main track to the other.