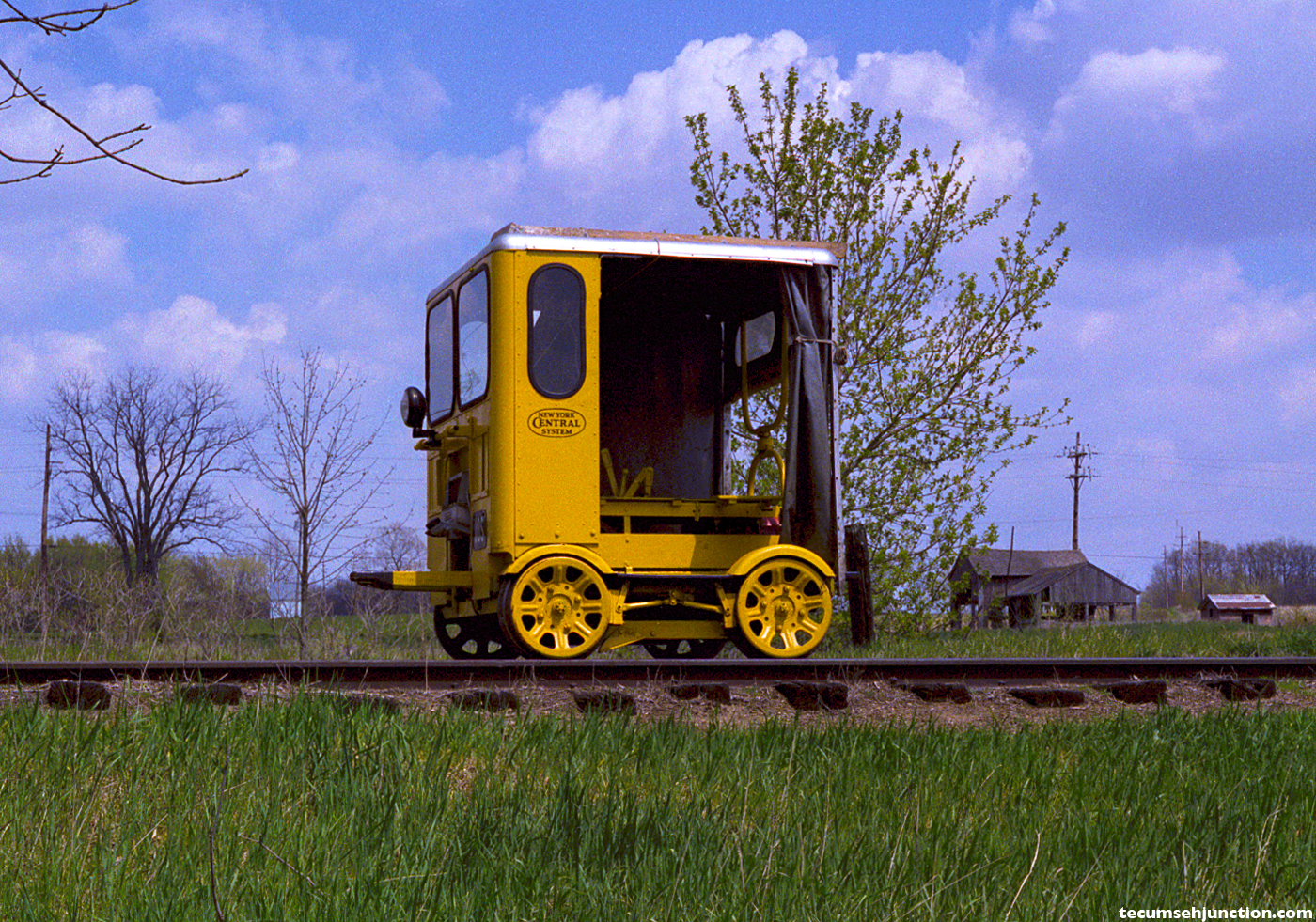 “NYC 110S” pauses at a bucolic spot on the Southern Michigan Railroad, south of Clinton, Mich., in the spring of 1989.

The mid to late-1980s was the age of the railway motor car on the Southern Michigan Railroad, which owned the line between Clinton and Lenawee Junction, Mich. The recent large sales of used motor cars by the Norfolk and Western Railroad at nearby Bellevue, Ohio had brought many well-used motor cars to the SMR yard in Clinton.

While most purchasers restored their own cars, Dave Haugan of Harper Woods, Mich. asked me if I could work on his car for him. He wished to leave it at the SMR and have it available for general use, so we agreed that the ex-N&W car should be restored to look like a New York Central car, and work took place in the summer of 1986.

The car itself was not in bad shape coming from the N&W. No major body parts needed to be repaired, so the overall restoration required a general mechanical overhaul, glass replacement, and a paint job. A new headlight was also fitted.

The NYC aspect required an overall safety yellow paint job, including the wheels. I then fashioned NYC number plates for the front and back from tin. These were painted and lettered with lettering from an NYC standards book. (With the number 110S, this would signify a signal department car.) Finally the NYC logo was applied to both sides of the car, using a stencil made from an original NYC car that was at the SMR.

The 110S is seen at Tecumseh Crop Services, which was located on Staib Road at the half-way point between Clinton and Tecumseh, Mich. A ladder is tied to the roof as the signal department crew has been working on a telephone box nearby. This photo is from the spring of 1988. 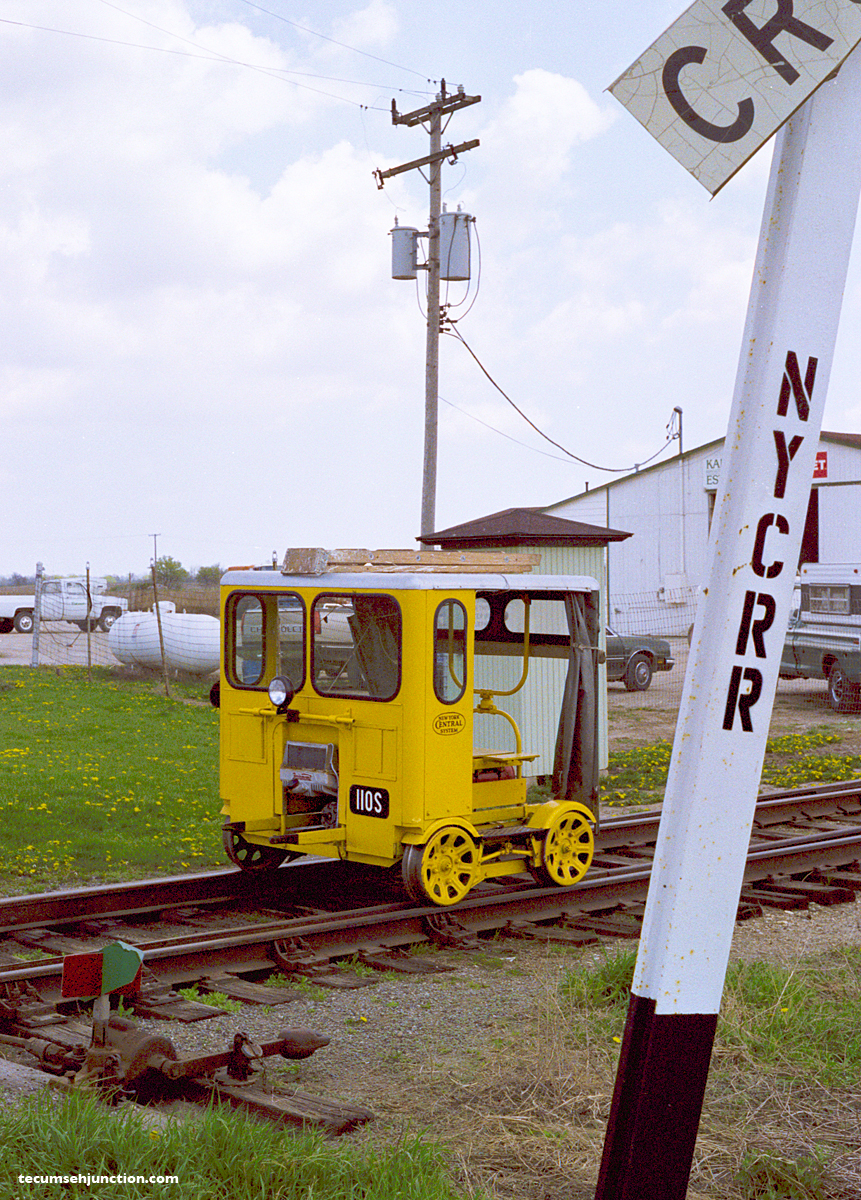 Another photo at Staib Road in the spring of 1988. The signal department has been doing some work on the phone box on this day, and is ready to return to Clinton. 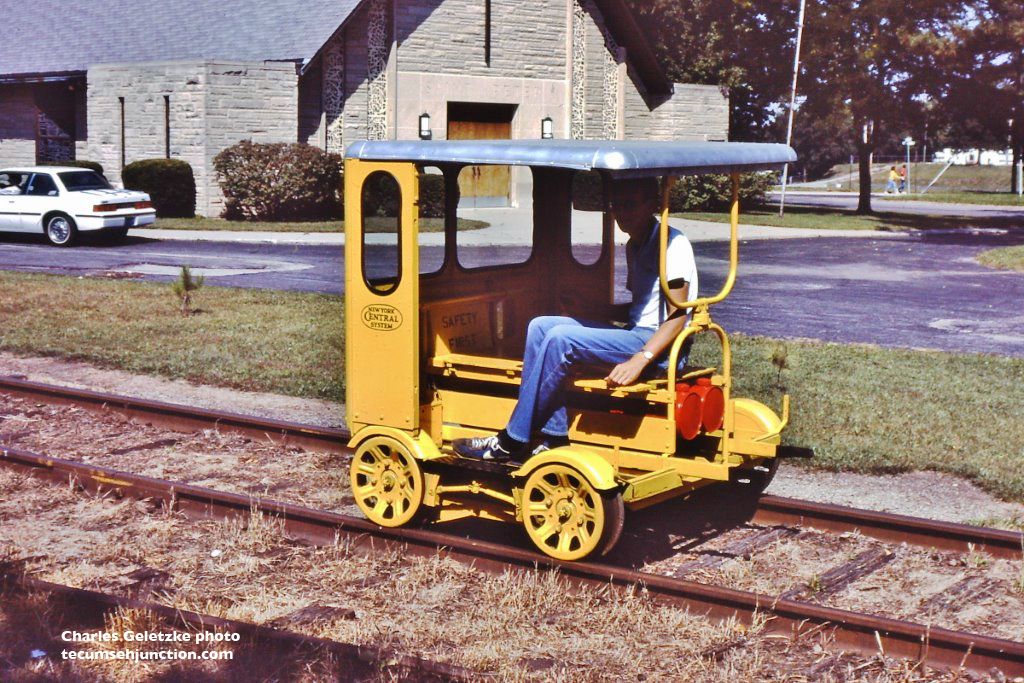 Here the NYC 110S is at Tecumseh, Mich., outside St. Peter’s Episcopal Church, with this blog’s author at the controls. This motor car had a rather unique arrangement of dual round fuel tanks. This photo was on a test run. The rear windows and rear and side curtains were yet to be installed. (Charles Geletzke photo; used with permission)