A Working Day on the LCRC 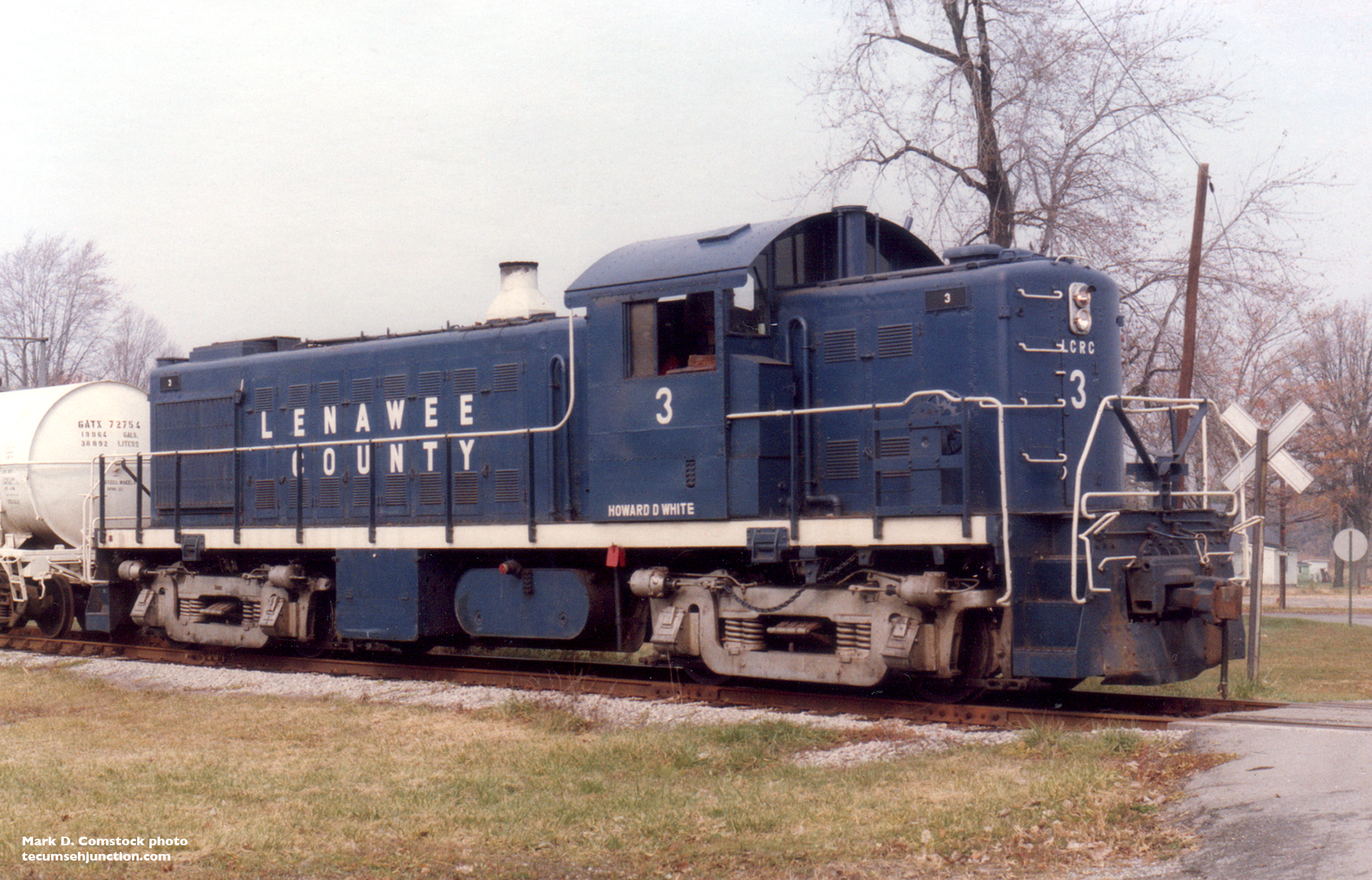 LCRC #3, the “Howard D. White”, crosses Jipson Street Blissfield, MI on 02 November 1987. The elderly RS-1 is a veteran of the Washington Terminal Company and a member of the Alco class of 1944.

This article originally appeared in the Winter 1988 edition of “The Cross Tracks”.

I have long wanted to follow a working day in the life of our southeast Michigan neighbor, the Lenawee County Railroad. Being a diehard Alcophile. and shortline buff. I had the best of both worlds only 40 minutes from my home! I picked an unseasonably warm, sunny 65° November 2nd day for my trip, and armed with two cameras, I brought my friend Don Pontius and his video camera for a thorough coverage of the day.

We arrived in Adrian at 8:30 a.m. and met the three “outside” men, engineer Harry (“Bro”), conductor Mark, and locomotive foreman Rick in the modern, two-stall enginehouse. The Lenawee County Railroad employs three “inside” people as well.

The road runs two Alco locomotives, an S-2 #2 “George Crane”, built in 1941, and RS-1 #3 “Howard D. White”, built in 1944 as Washington Terminal #43. The original unit on the 32-mile line was S-2 #1 “Addison J. Comstock”, built in 1948 as Baltimore and Ohio #9058, and with that name, it’s easy to see my interest in this locomotive! It was #1 that started the line in October of 1977 and ran well for over five years before suffering a cracked block in January of 1982. In the summer of that year, #3 arrived as a replacement. Number 1 now sits in a metal scrapyard behind the railroad and serves as a parts supply to keep the other two locomotives running. 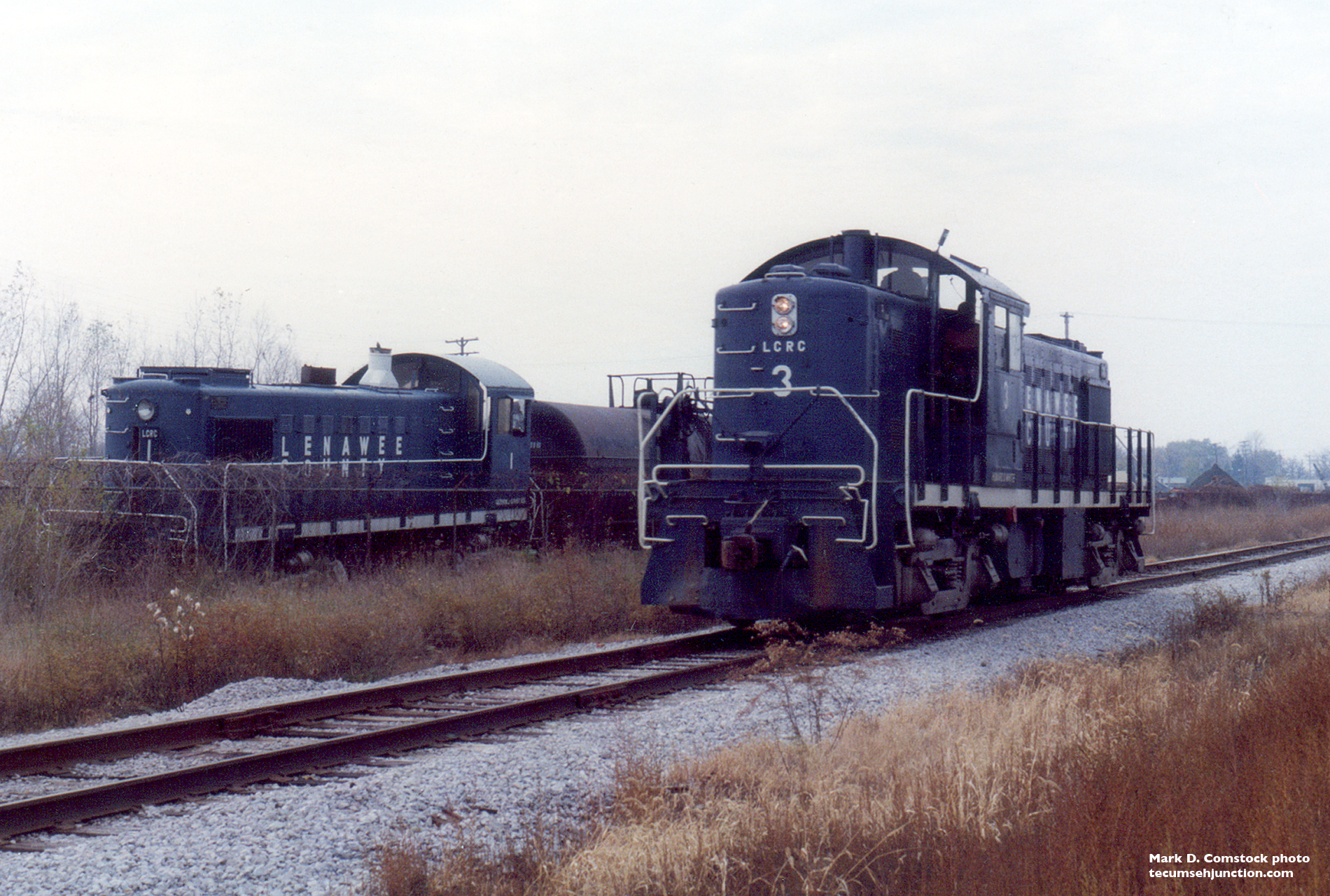 The retired LCRC #1 remained in the Adrian, Mich. scrapyard for many years as a parts donor. Here the LCRC #3 gurgles past it on the way to Blissfield on 02 November 1987.

Our power for today was #3. Harry and Mark pulled out of the engine house at 9:00 a.m. and left for Riga, at 18 miles distant the eastern end of the line. We photographed #3 crossing Rouget Road in Palmyra, then crossing Quick St. and Silberhorn Highway in Blissfield. Arriving at the Grand Trunk Western interchange at Riga, eight cars were picked up, including three Santa Fe grain cars and five GTW hoppers. The train took the cars to the Kaiser Estech farm supply in tiny Riga, where it dropped off two of the Santa Fe cars and positioned the other ATSF car in front of it. It then headed to the Estech plant in Blissfield, where the remaining Santa Fe car was left. The #3 then took the five GTW cars to the big Blissfield Co-op elevator beside US-223.

The next move for #3 was to head back to the back of the Blissfield Estech plant, where a good sized group of GATX tank cars were stored. Here. the men went to work on the long process of sorting out the tank cars, setting out two of them along the mainline.

While Don and I broke off for a great lunch at the Ye Olde Town Pump restaurant in downtown Blissfield, #3 headed into Blissfield to another tank car storage area along Jipson Street. Joining the train again found #3 still at work along Jipson Street. It had to move as many as 22 cars at a time to finally dig out four cars to take east back to the Estech plant. All six cars were then delivered to the GTW interchange at Riga. 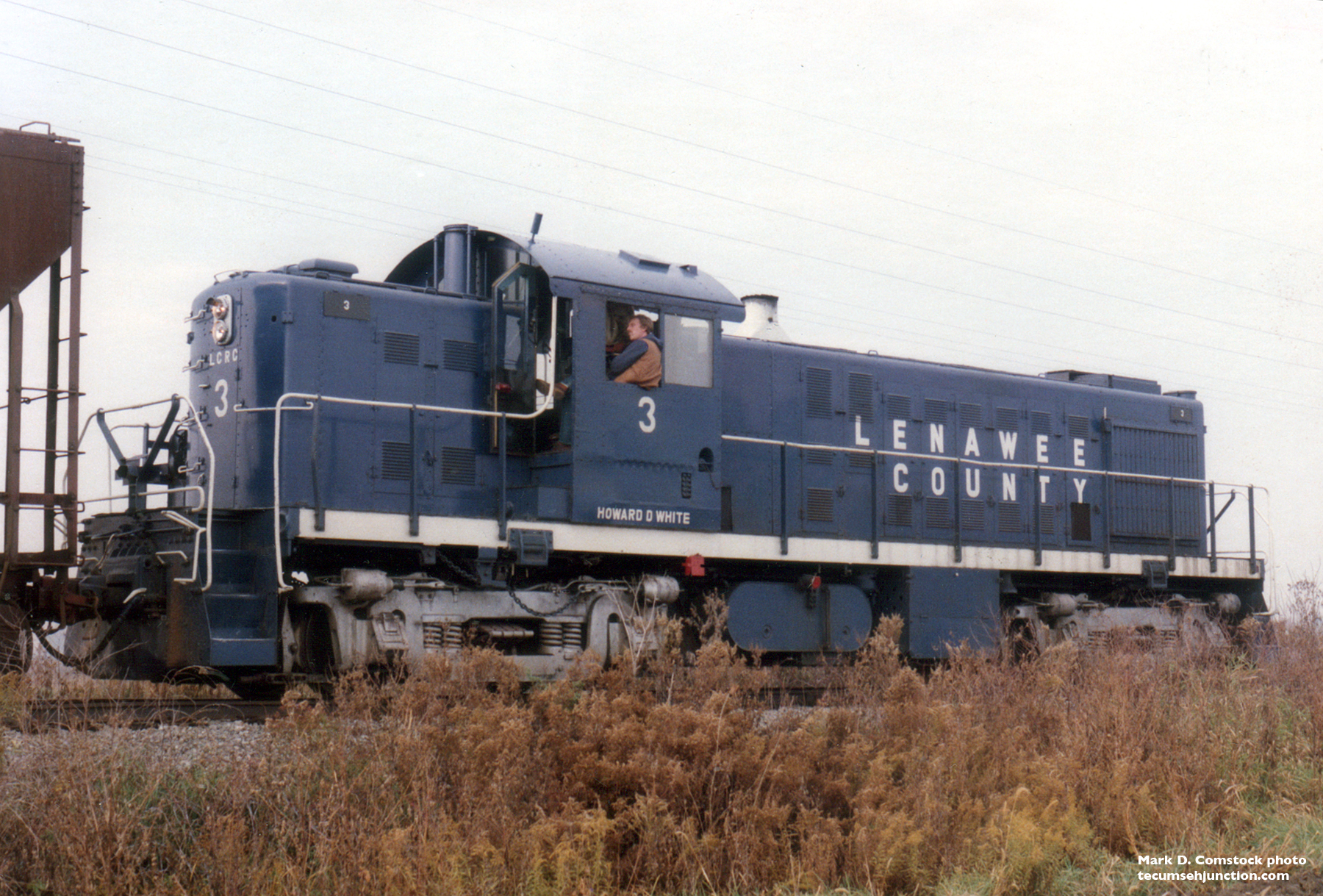 LCRC #3 backs down to the GTW interchange at Riga, Mich. This interchange was relatively new; prior to 1982 the line crossed the GTW at grade and continued to Toledo. Photo from 02 November 1987.

As #3 then headed light back to Adrian, we caught it crossing the bridge over the River Raisin in Blissfield and got some long-range shots of it in the open fields east of Palmyra. It arrived in Adrian about 3:00. passing old #1 on the way to the yard. Harry and Mark had the #3 switching the yard area for a good hour before pulling into the engine house, beside companion #2, and calling it a day.

It was a real thrill to photograph a working Alco unit in 1987, doing what it was meant to do. At 43 years of age, #3 has been one very useful locomotive, as has its sister unit #2. Let’s hope that they both enjoy many more years of service, as well as their owner, the Lenawee County Railroad! 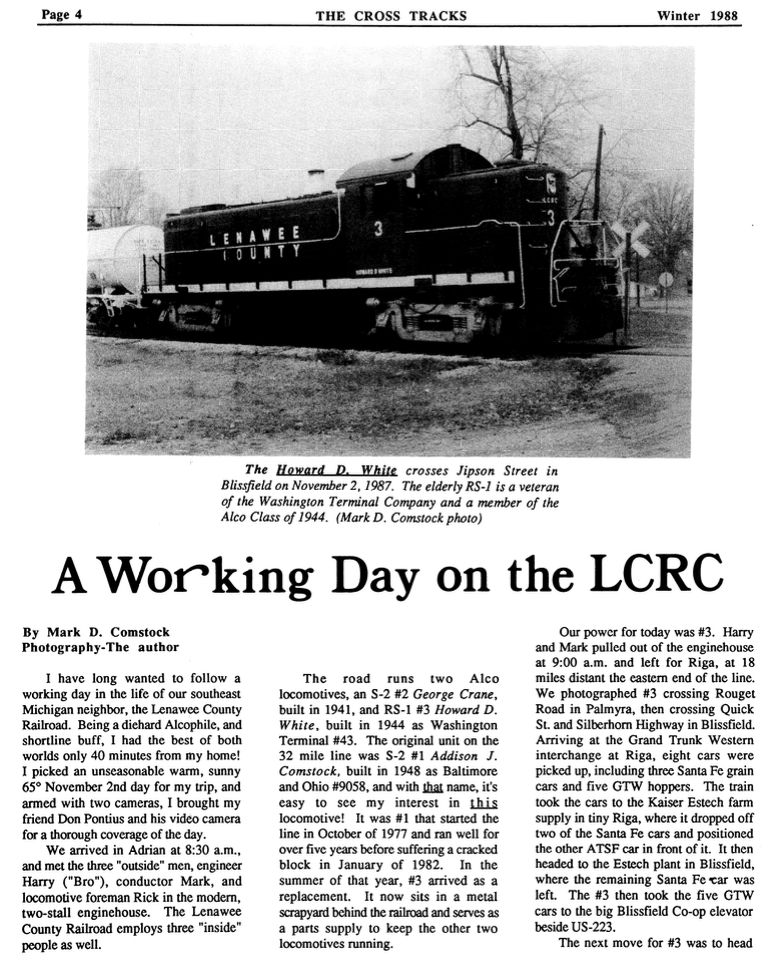 View of the original article in “The Cross Tracks”