Atlas gets a delivery of Rock

The time the Rock came to Tecumseh

In 1977, an enormous fire destroyed the Hayden Mill, located along the DT&M spur in Tecumseh, Michigan.

Following the fire, the property was acquired by Charles J. Steffens, owner of the Atlas Mill and Elevator located in Clinton. In 1978 he constructed a new building on the site of the original Hayden Mill, incorporating the former Hayden office building, which survived the fire.  A new business, Atlas II–Town & Country Store, opened in the light blue pole building, selling animal feed, lawn and garden supplies, and more.

The sign on the Atlas II building remains, long after closure.

Although the old Hayden siding still ran alongside the new building, and a small part of the building’s loading dock was next to the siding, no rail deliveries were anticipated. Everything was delivered by truck. Jeff Williams, manager of Atlas II in the 1980s reported: “The only thing we took huge shipments of was Purina pet foods. We stocked it there for both Atlas stores, sold it retail, and also sold to other mills like Branch and Sons in Onsted. I remember receiving entire semi trailers full of Purina chows.”

My railroad friends and I, studying at Tecumseh Junior High School at the time, kept an eye on the pulse of the railroad through Tecumseh. Normal traffic was just the passing of the Clinton local train, southbound to Lenawee Junction in mid-afternoon, and northbound in the evening. Sometimes the train would stop to switch some boxcars in the Tecumseh yard, but otherwise there was not much local activity.

This changed one day in May 1979, however. One of us excitedly spread the news that a Rock Island boxcar had been spotted at the Atlas II store! An after-school excursion revealed that indeed 40′ boxcar #ROCK 529315 was sitting there, in the still-relatively new “Bankruptcy Blue” paint scheme.

Delivering the car required using the connecting track between the Clinton Branch “main” line and the old DT&M spur, something which none of us had ever witnessed. This forgotten piece of track was hidden in the grass and had been barely used for 10 or 20 years.

Inquiries to the Atlas store yielded no information as to when the car would be picked up. So every day one or more of us was present in the area to see if the Local would stop. Several days passed, and classmate Dale Pape was on hand in the evening as the northbound Local stopped and went to pull the boxcar from Atlas. Conrail GP-8 #5413 gingerly crept over the connecting trip and onto the old DT&M spur on Cummins Street. The switch to the old Hayden spur was thrown, and the locomotive moved down the middle of the street to couple to the boxcar.

The process was then repeated in reverse, and the boxcar was added to the northbound Local. To reduce switching and save time, it went north to Clinton and returned south towards Toledo the next day.

This was the last freight train on the DT&M spur. Atlas II received no further deliveries by rail. The DT&M spur was removed about 1989.

How did this one-off delivery occur? No one knows. Perhaps it was a simple clerical error on the bill of lading, specifying rail instead of truck? 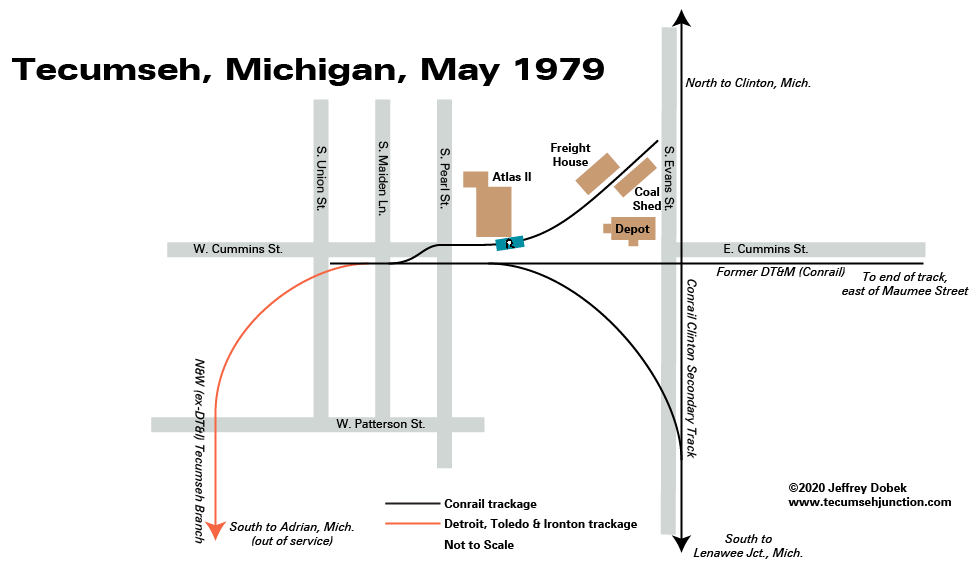 Dale Pape has kindly provided the following photos of the event:

First sighting of the Rock boxcar at Atlas II. In the background is the old coal shed. 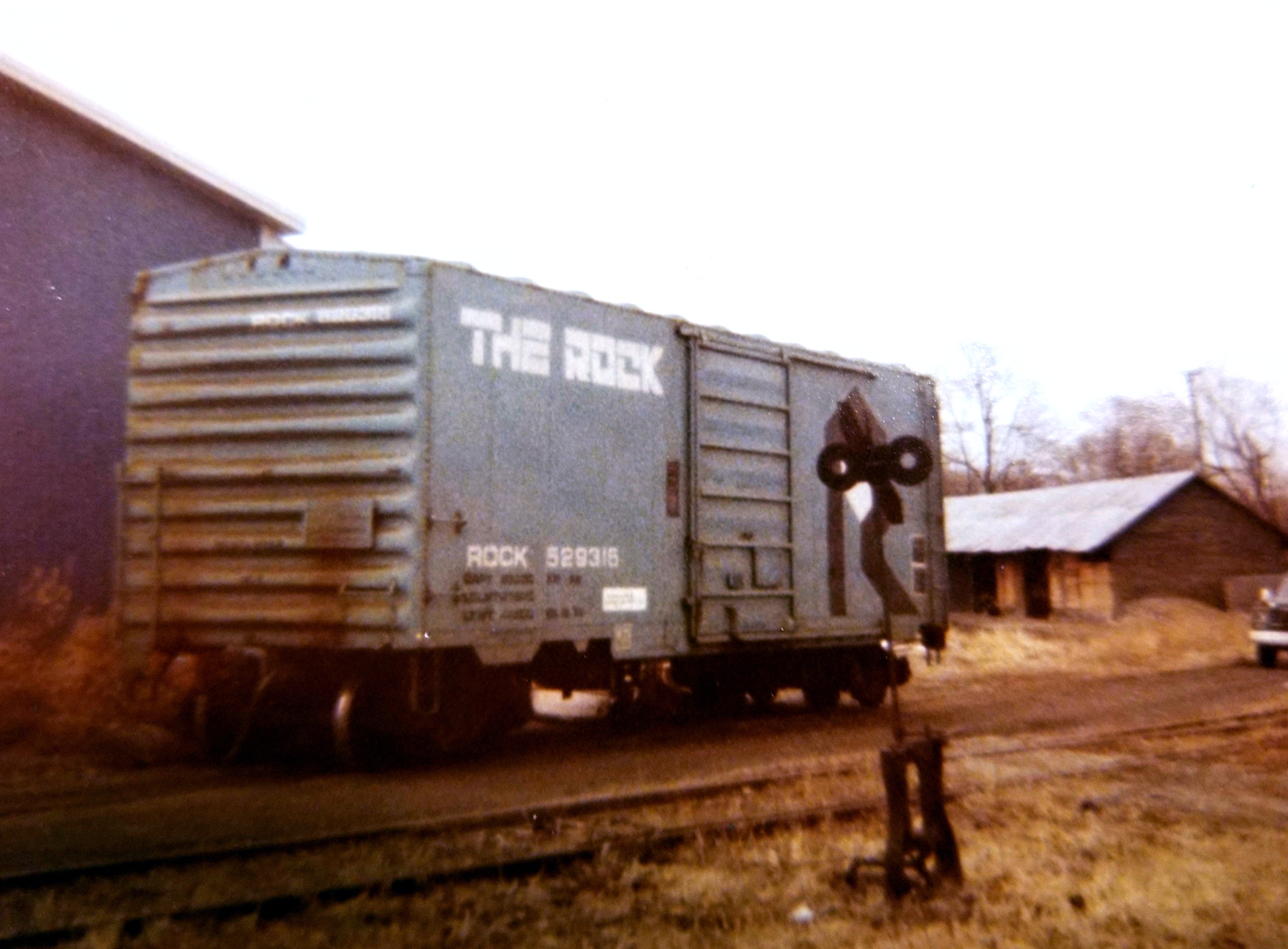 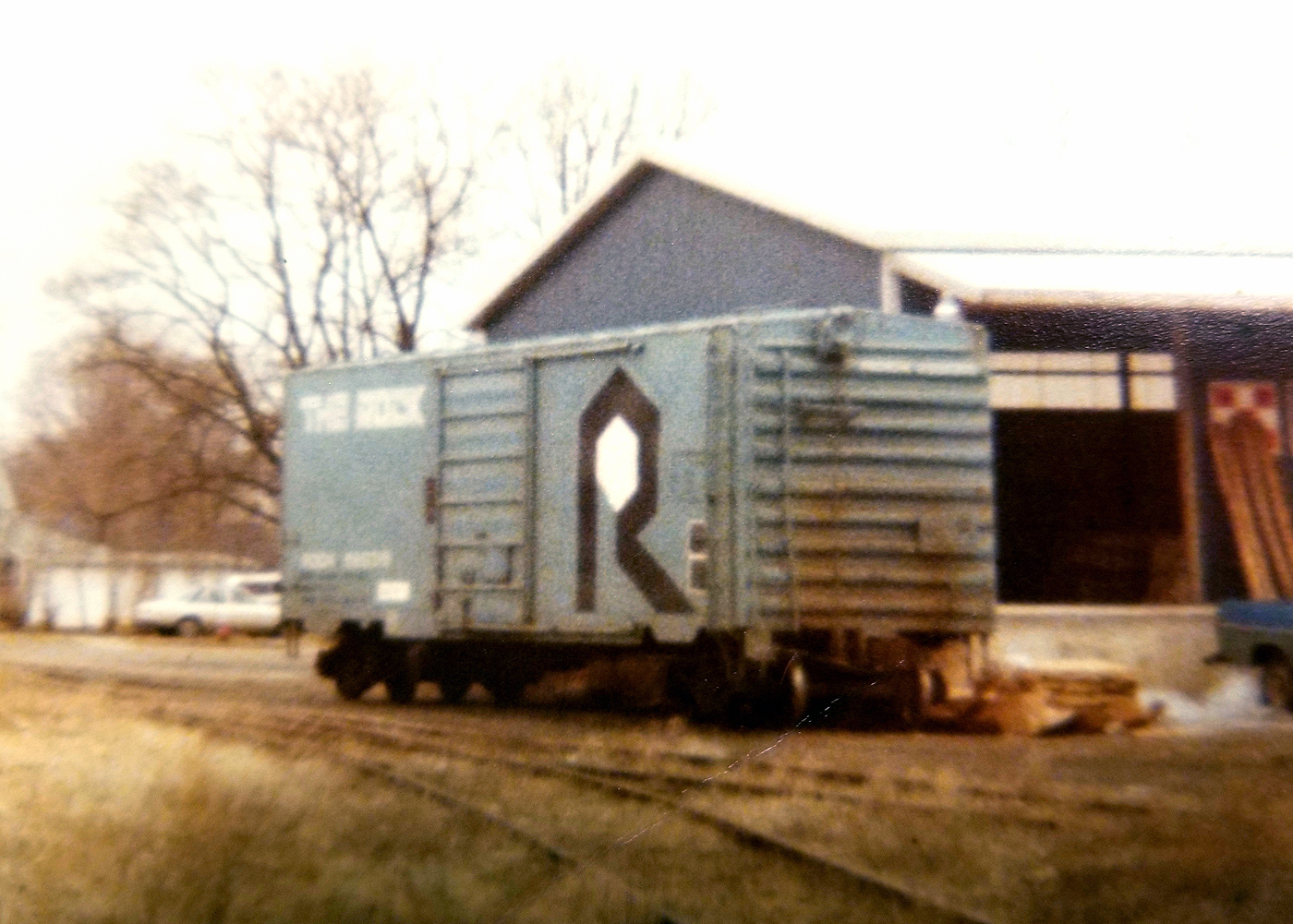 The arrival of Conrail #5413 to collect the empty boxcar. First it must move around the connecting track onto the old DT&M. 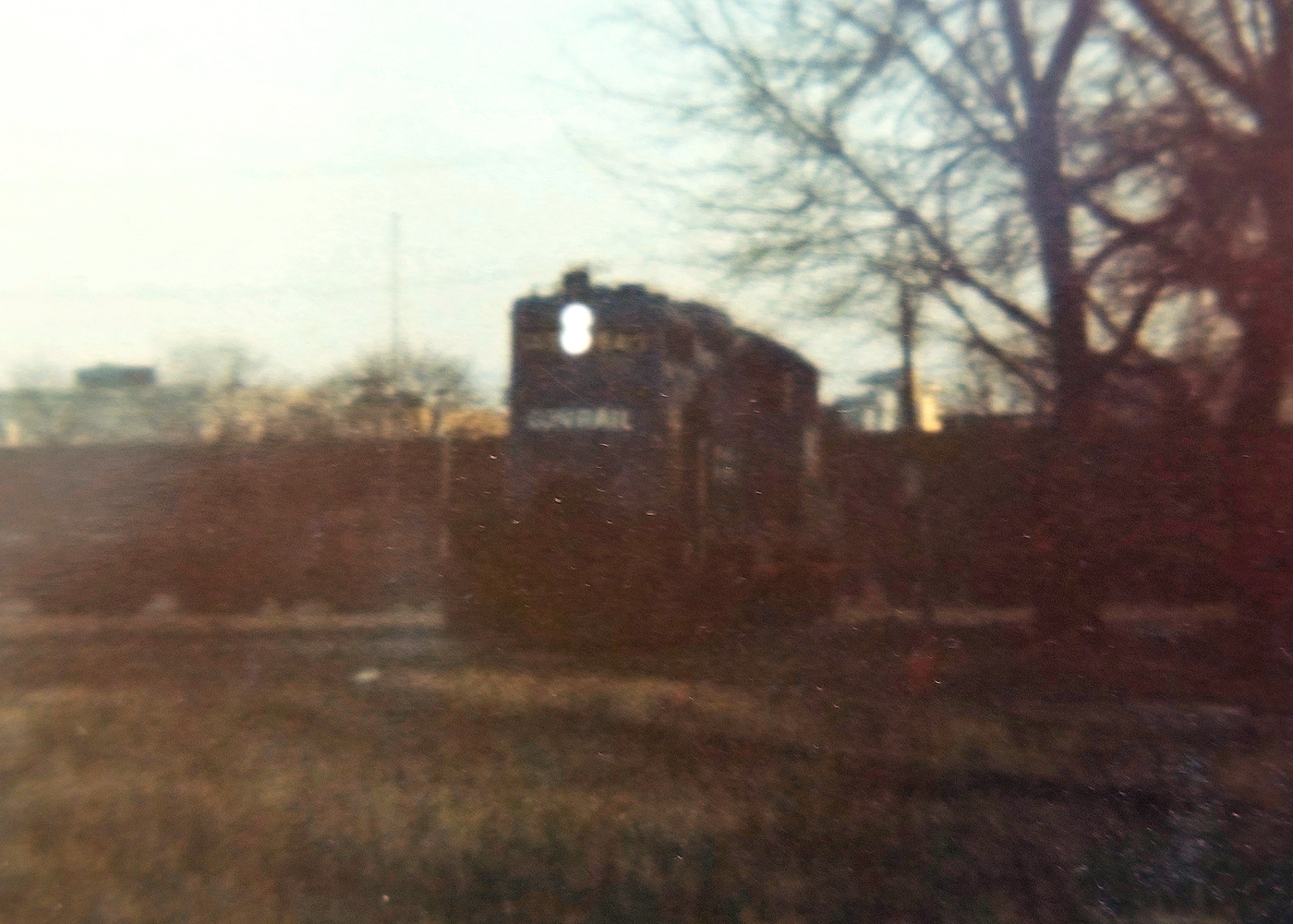 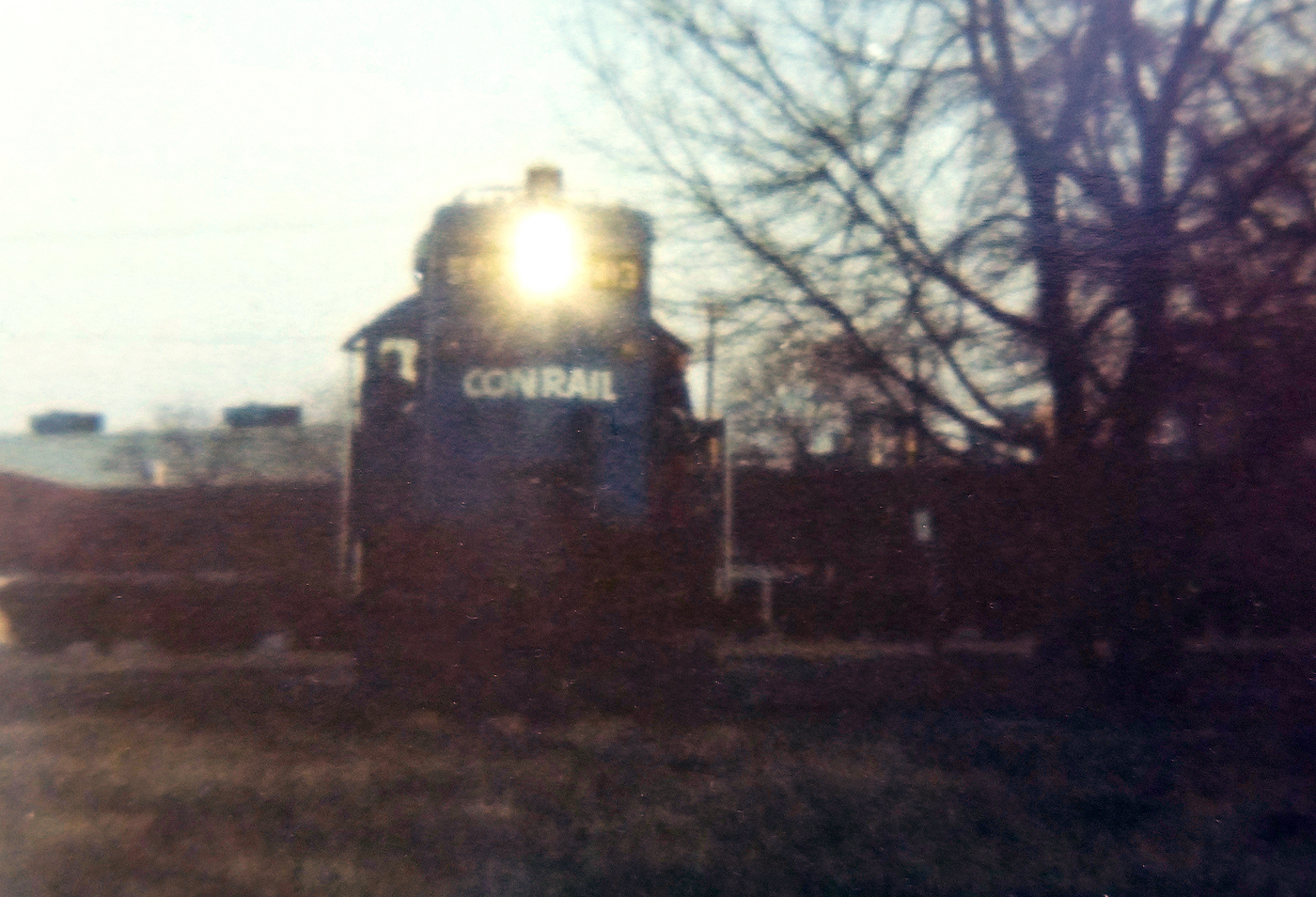 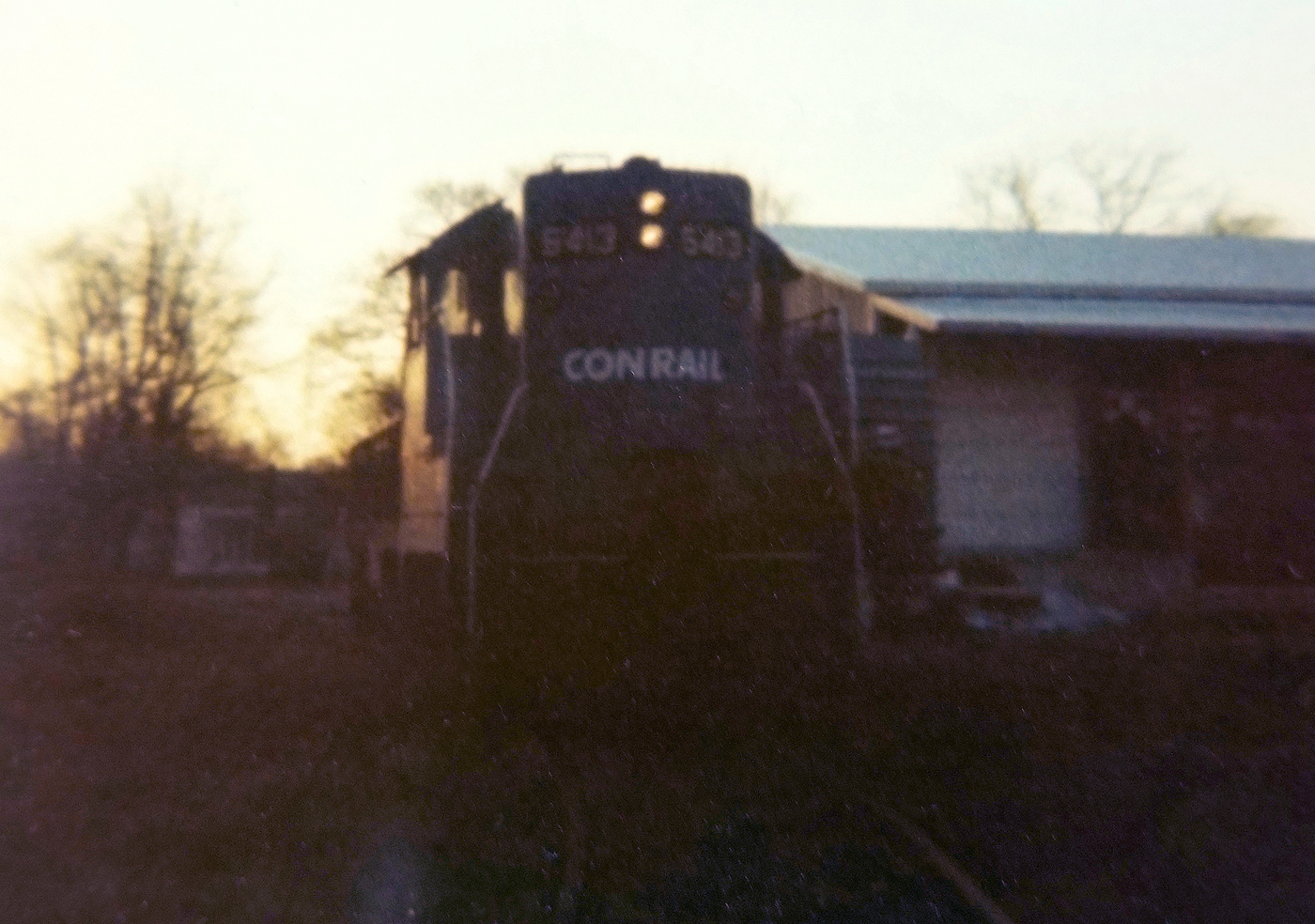 Once on the DT&M spur, the locomotive moved down the spur in W. Cummins Street to reach the boxcar. 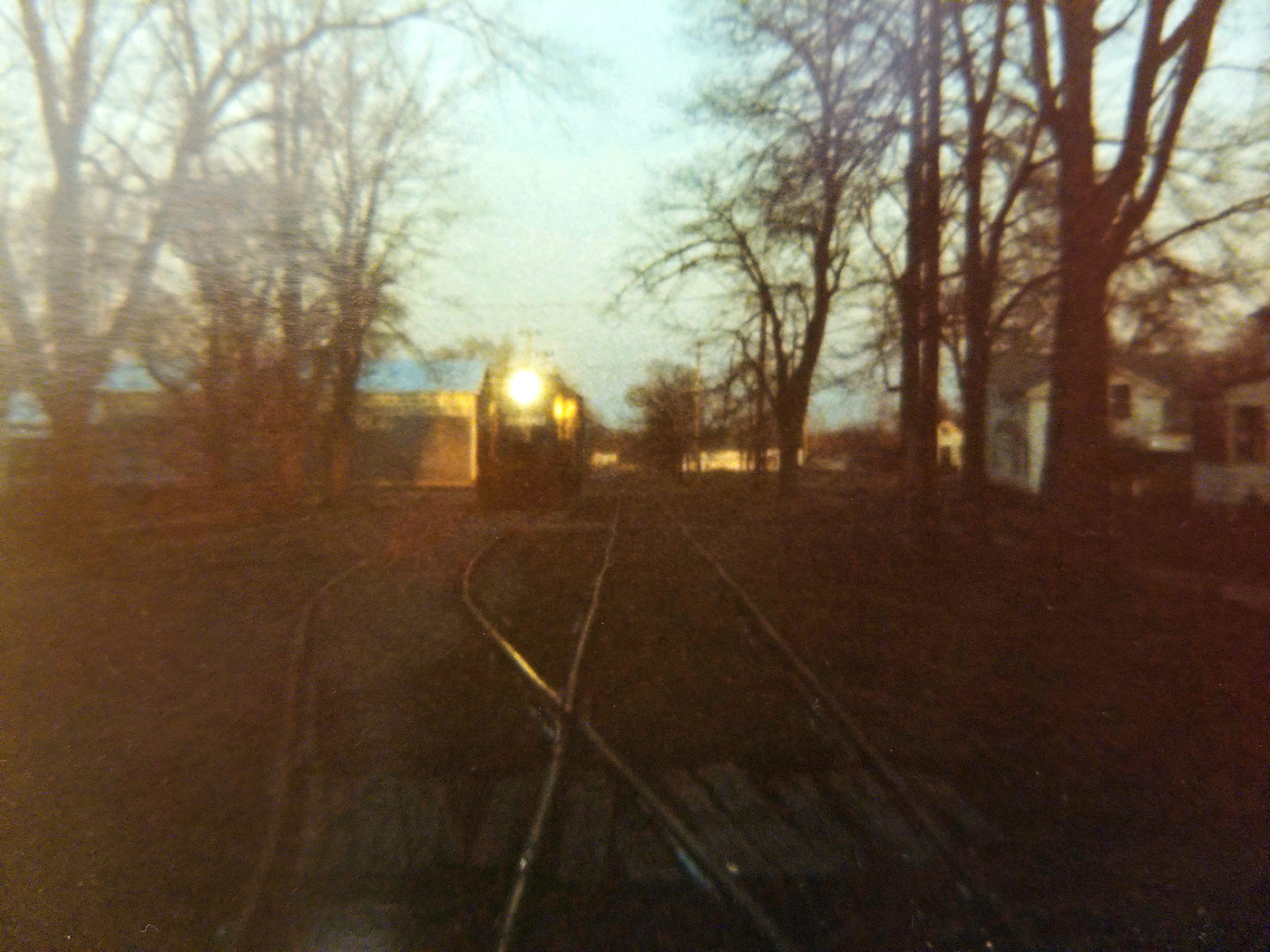 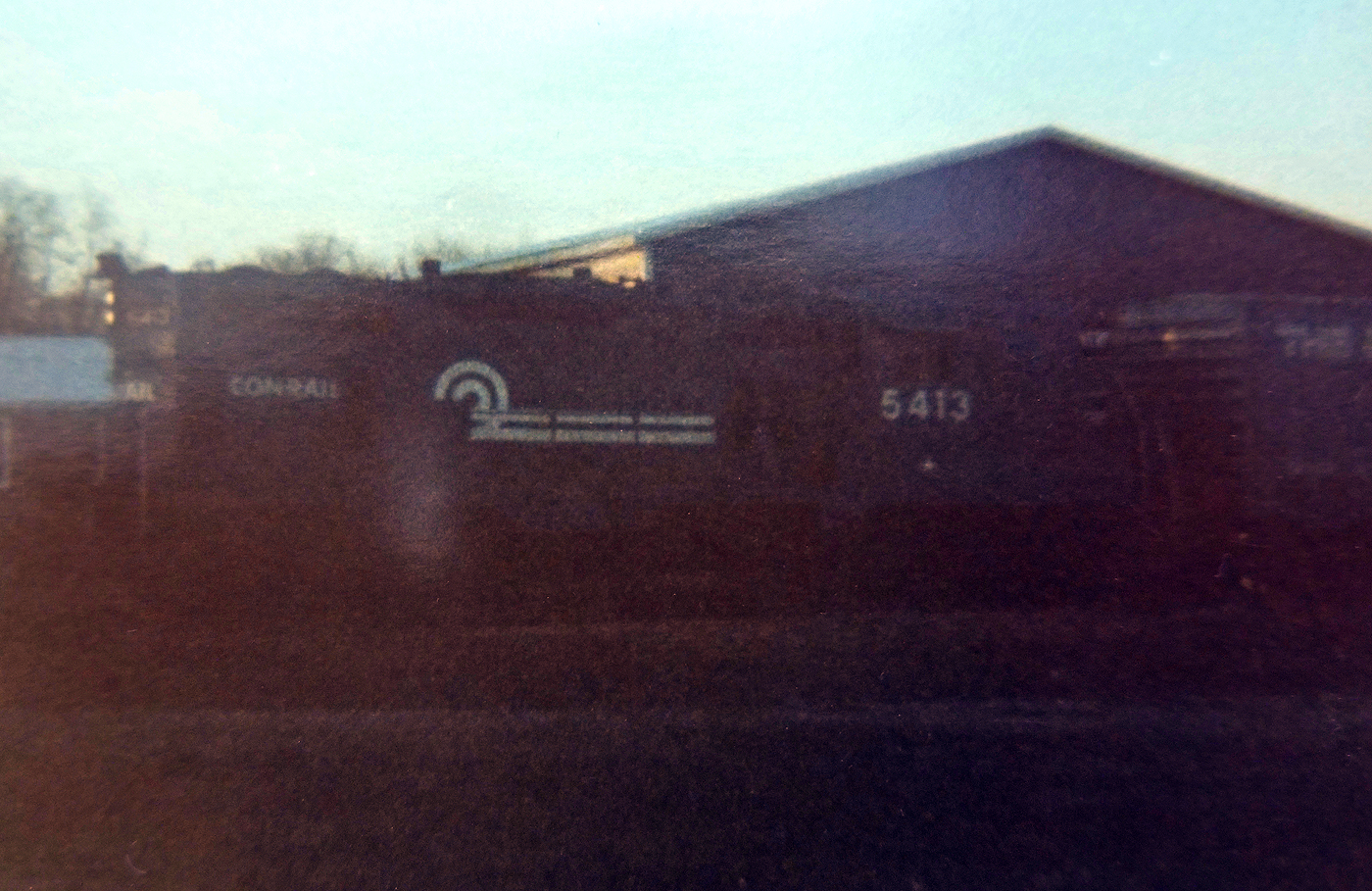 The train then returned to the DT&M main, and backed back around the connecting track. 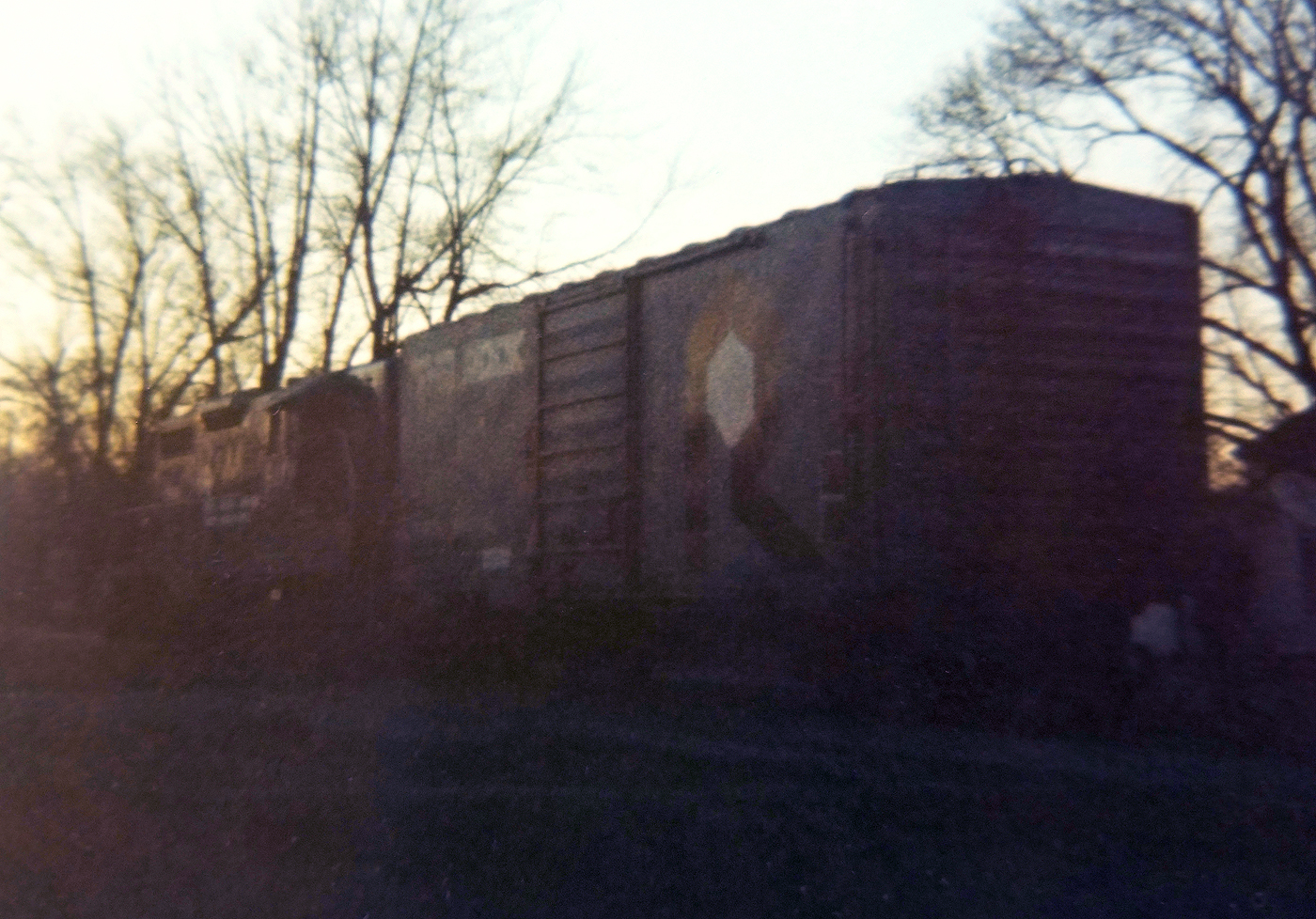 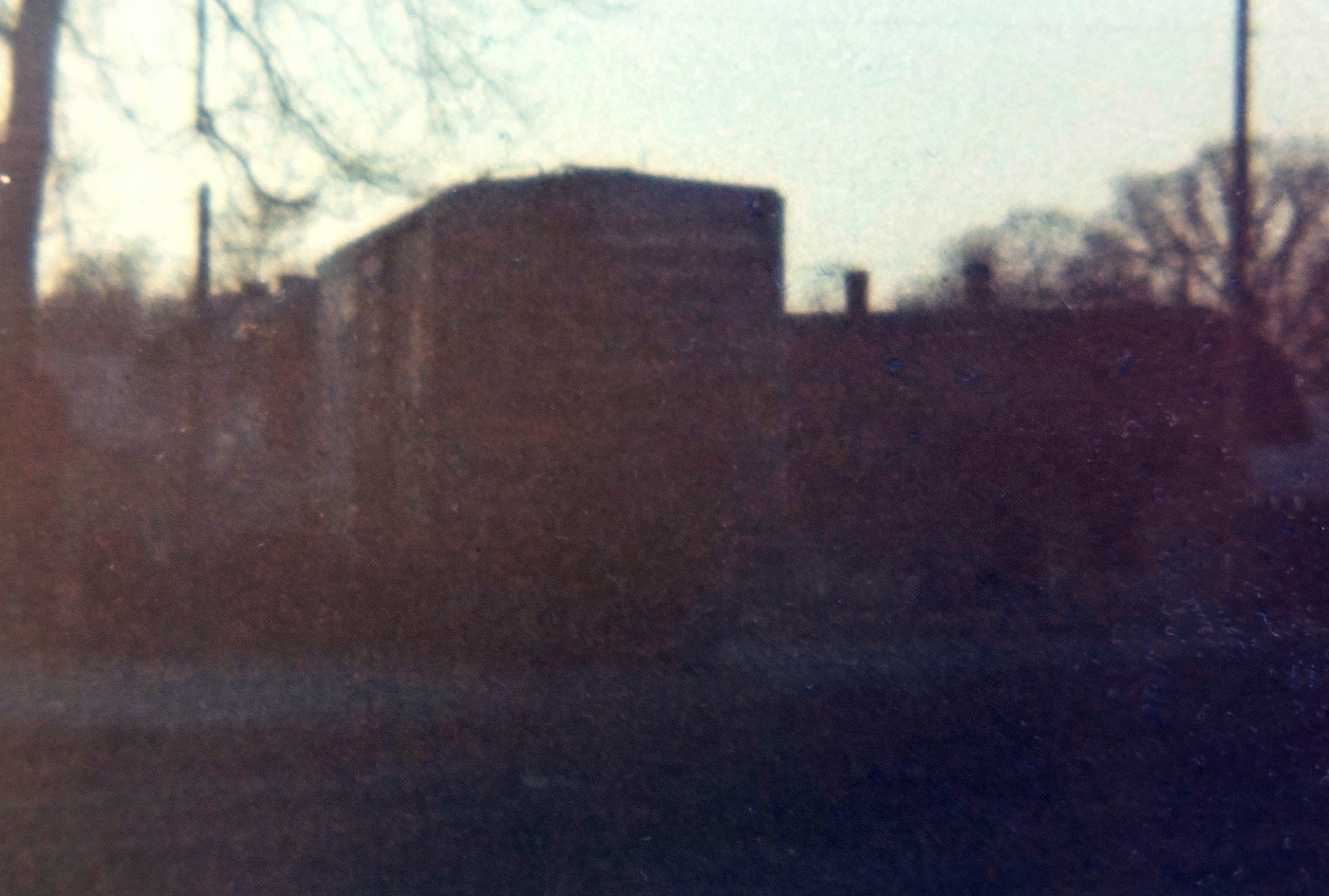 The Atlas II spur would see yet one more train movement. The Southern Michigan Railroad Society purchased the Clinton line in 1984, and a year later it received the donation of a Plymouth 35-ton switching locomotive. The Plymouth was shipped by truck from Albion, MI, and unloaded on the part of the Atlas spur in Cummins Street on 21 May 1985. It then spent a few weeks parked next to Atlas II before being moved by rail to Clinton. 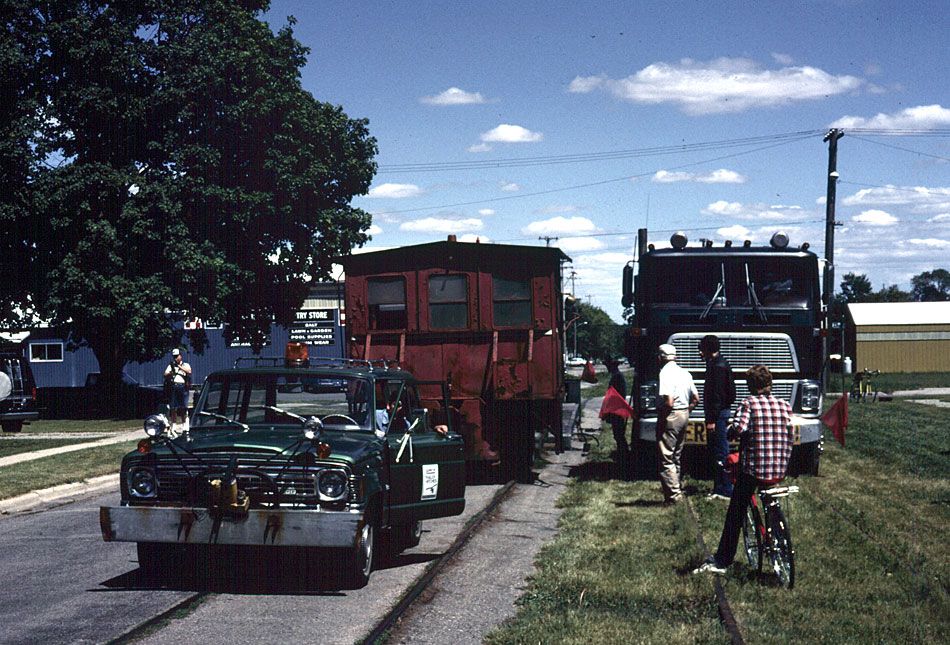 Unloading of the SMRS 35-ton locomotive on W. Cummins Street on 21 May 1985. The locomotive is on the Atlas spur; the track to the right (under the truck) is the old DT&M main line. 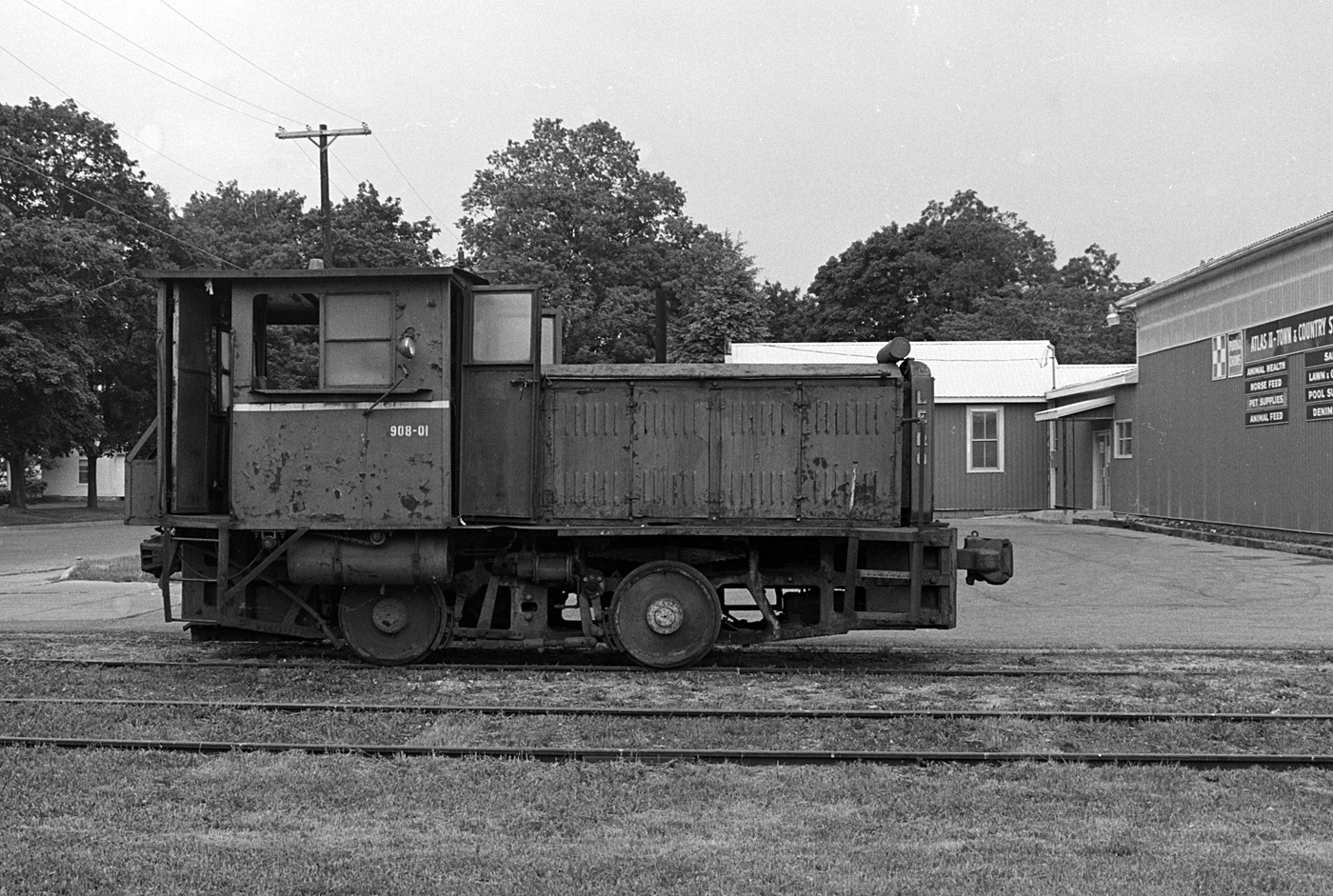 The SMRS 35-ton Plymouth, parked next to the Atlas II store. The locomotive is awaiting movement to Clinton for restoration. (Gerald Grossman photo, May 1985) 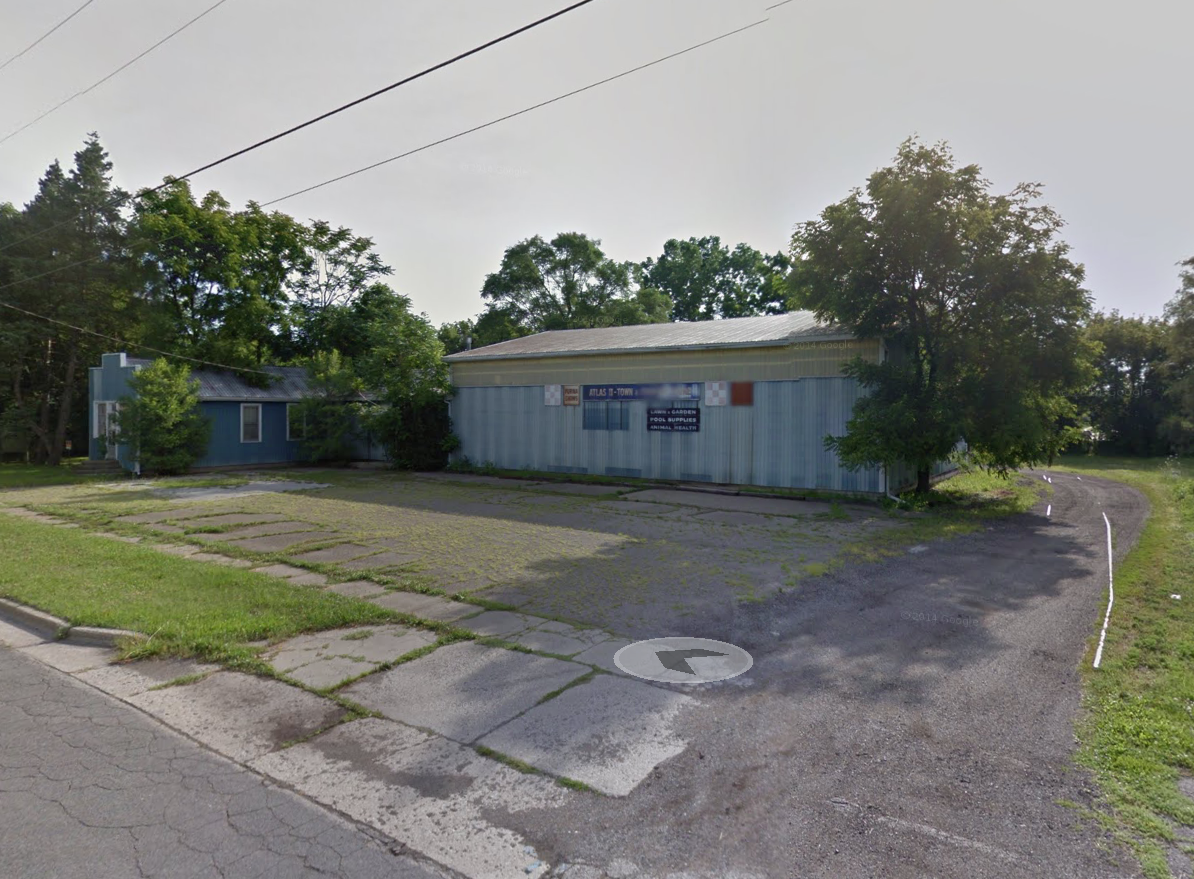 The long-closed Atlas II store as recently captured by Google Streetview. The spur is visible in the driveway to the right. 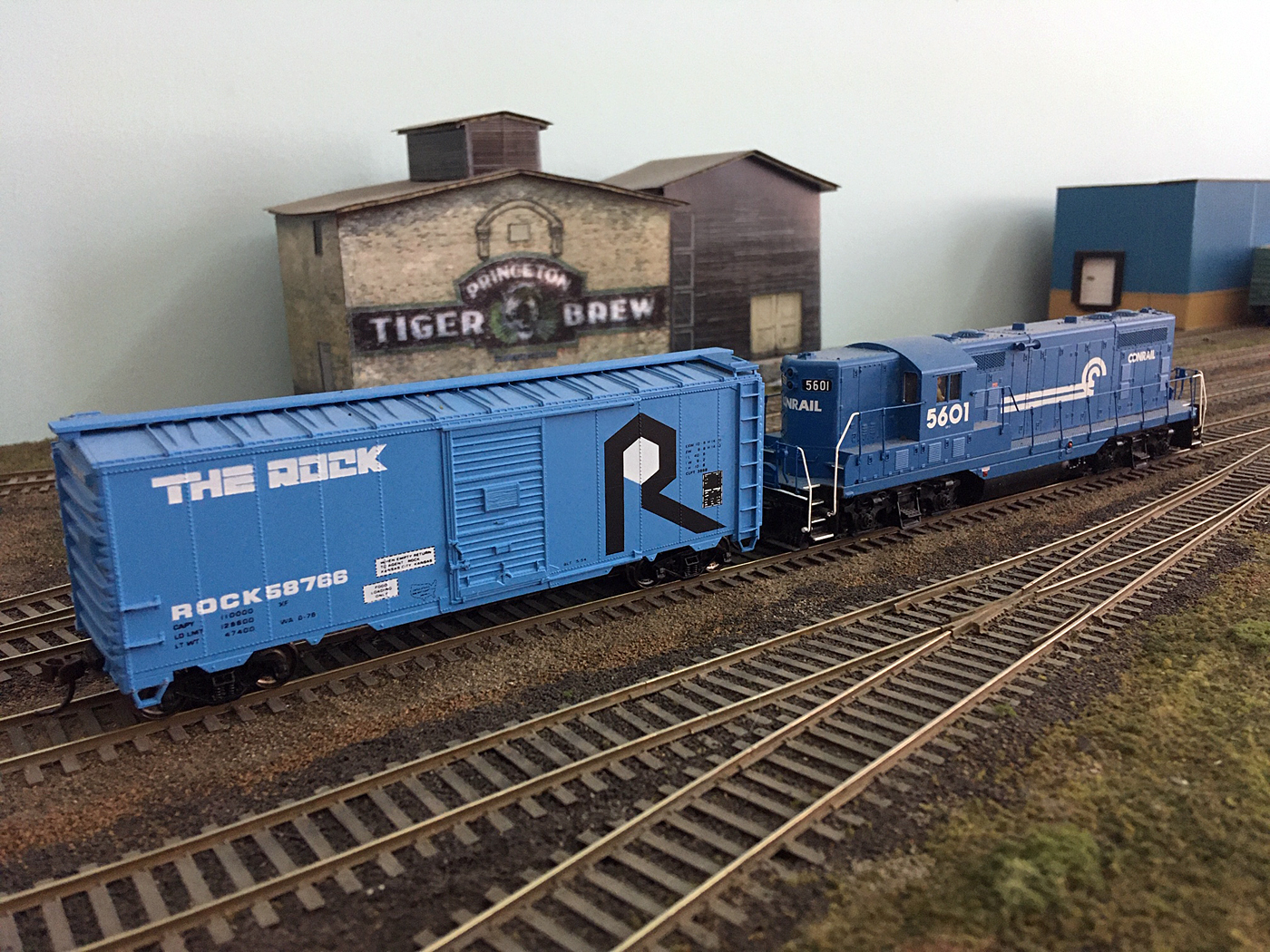 The day The Rock came to Tecumseh more than 40 years ago remains in my memory today, and is commemorated by this 40′ blue boxcar on my model railroad.

Many thanks to Dale Pape for providing scans of his photos.