The D&LN Comes To Town 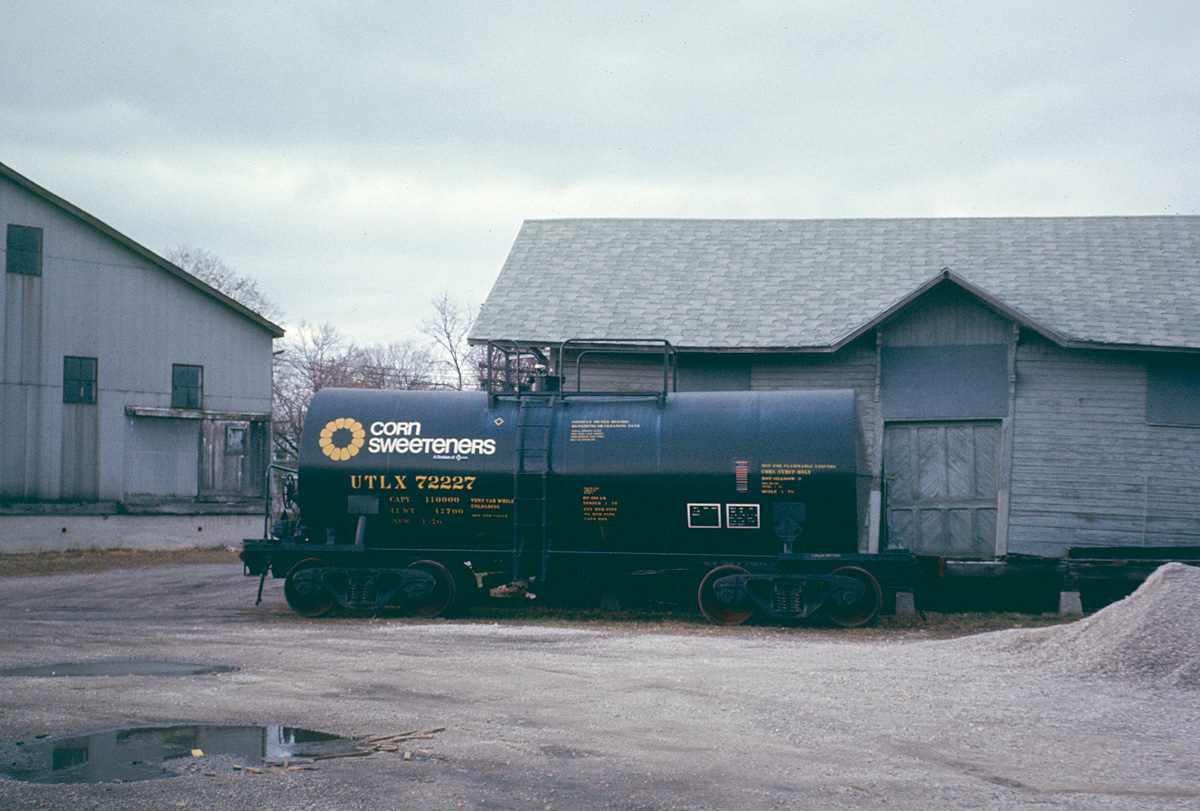 The old D&LN freight house was captured still standing at Tecumseh Junction on 01 December 1978. By it is a car of corn syrup, probably for transload to truck for Hubbard Apiaries of Onsted. To the left is part of the Hayden Mill, shortly before it burned. (Edward Hodges photo)

The Lima Northern is in Tecumseh—Track Reached tbe Corporation Line Last Night at 8:20!

These were the headlines in the Tecumseh Herald of May 28, 1897 announcing the completion of the Detroit and Lima Northern Railroad Company’s line to Tecumseh,·the third and final railroad constructed through the community.

With the ninetieth anniversary of the completion of the D.&L.N. at hand, this seems to be an appropriate time look at the D.&L.N. facilities in Tecumseh and the impact of this railroad on the community.

The article in the Herald continues:

“All the week delegations of Tecumseh people have been watching the progress of the contractors with their work on the Detroit and Lima Northern, and when at 8:20 last evening the construction train reached the corporation line, several hundred people were on hand to see the gang at work and make sure that the end of the road did not get away. Tonight the ‘frog’ and switch to the C.J.&M. will be in.” (The remains of this switch still exist today near the corner of Cummins and Union Streets. The track running along Cummins Street was part of the main line of the C.J.&M., the Cincinnati, Jackson, and Mackinaw, which ran from Dundee to Marshall.)

“Sunday the excursion train will start from Tecumseh as advertised. Monday a vestibuled train will be run from Lima to Detroit and early next week the accommodation train service between Tecumseh and Lima will be established. The management also states that within two weeks all the trains will be running through Tecumseh and the use of the Wabash between Adrian and Britton will be abandoned.”

The above-mentioned excursion train ran to Detroit and apparently everyone in town who was ambulatory rode the train, leaving Tecumseh a virtual ghost town on the final Sunday in May of 1897.

The June 4th issue of the Henild listed the timetable for the D.&L.N. which showed three passenger trains in each direction on a daily-except-Sunday basis with a single train in each direction running on Sundays. In addition, the railroad ran frequent excursion trains on Sundays to Detroit and resorts in Ohio.

The D.&L.N. used the Detroit, Toledo and Milwaukee depot on South Maumee Street, and this depot was sometimes referred to as the Tecumseh “Union Station”. (The C.J.&M. and the D.T.&M. refer to the same railroad line through Tecumseh. The many reorganizations and mergers which occurred in the late nineteenth century are responsible for this confusion in names.) 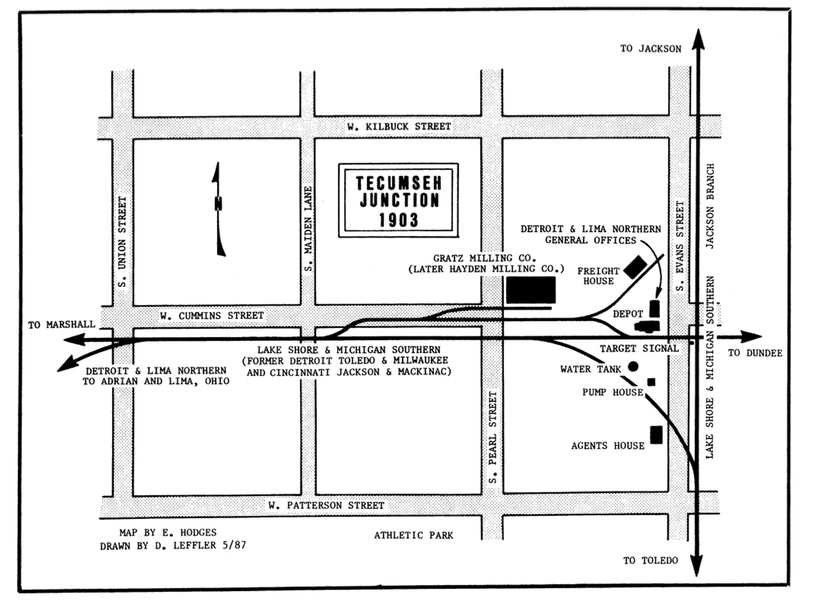 In 1899, the Lake Shore and Michigan Southern Railroad acquired the D.T.&M. (C.J.&M.) and, shortly afterwards, the depot and D.T.&M. freight house (which stood on East Cummins St., near the foot of S. Wyandotte St.) were moved to S. Evans St., where the D.T.&M. crossed the Jackson Branch of the L.S.&M.S. This depot is now owned by the Teeumseh Area Historical Society and was moved to Tecumseh’s business district last October.

About this same time, the Lima Northern, needing office space for its newly formed division point at Tecumseh, constructed a sixty foot by thirty foot frame office building. This building, with ornate brackets under the eaves and decorative trim on the gables, faced Evans Street just north of the depot.

When the Detroit, Toledo, and Ironton Railroad (successor to the Lima Northern) moved the division point offices and car shops from Tecumseh to Napoleon, Ohio in 1907, the building may have been converted into a freight house.

At some later date, the building was sold to the Hayden Milling Company and moved to the east end of the mill complex on Pearl St. A postcard featuring a photograph of the east end of the mill taken around 1940 clearly shows the old office building. Sever allarge doors had been cut into the sides of the building and its turn-of-the-century detailing contrasted sharply with the utilitarian corrugated metal mill buildings. Eventually other additions to the mill nearly obscured the building. The end for the office building came in 1979, when the entire Hayden Mill complex was destroyed by fire. The other remaining railroad building in the area, the D.T.&M. freight house, was bulldozed in the early 1980’s, following a failed attempt to move it.