The DT&I local switches Tecumseh in the 1940s

Although the tracks of two railroads, Conrail and Norfork and Western, enter Tecumseh today, rail service consists of only two freights a week. On Tuesdays and Thursdays, a Conrail freight makes the slow round trip between Toledo and Clinton performing local switching chores along the way.

It hasn’t always been this way…

When I was a youngster, in Tecumseh in the 1940s, both the New York Central and the Detroit, Toledo and Ironton railroads provided daily freight service.

The NYC arrived about noon and worked its way through town, switched cars at the Tecumseh Products and Quaker Oats plant in the south end of town, and then completed its duties at the freight house and Moore’s lumber yard north of the business district. 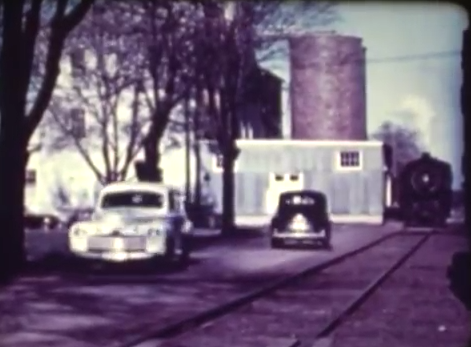 The New York Central switches the Hayden Mill in Tecumseh in the 1940s. The track in the foreground is in Cummins Street. (Screenshot from the film “God Is My Landlord – the Dynamic Kernels Tithing Experiment”) 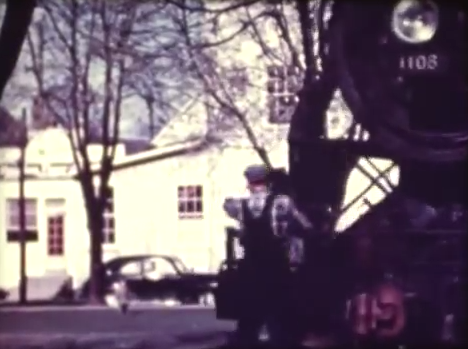 The New York Central switches the Hayden Mill in Tecumseh in the 1940s. (Screenshot from the film “God Is My Landlord – the Dynamic Kernels Tithing Experiment”)

But it was the late afternoon arrival of the DT&l local freight which interested me the most.

I never gave much thought to the reasons why I favored the DT&I. It may have been their bright yellow and red cabooses, which seemed more impressive than the drab tuscan red which the NYC used.

Perhaps it was because the NYC was such a vast and sprawling system, extending as it did from New York City to Chicago, that it was difficult to comprehend.

The DT&I on the other hand, was a simple and straightforward railroad running from the Ohio River to Detroit, with only a branch to Toledo and, or course, the branch from Malinta, Ohio extending through Wauseon and Adrian and ending in Tecumseh to round out the system. I even traced its route on maps of Michigan and Ohio in our Rand McNally World Atlas and memorized the names of most of the stations along the line–Ironton, Jackson, Waverly, Washington Court House, Springfield, Quincy, Lima, and so on.

Finally, since our home was near the corner of Union and Cummins Streets, the DT&I was considered to be one of our neighbors. On rainy afternoons, I could watch its operations from the porch of my grandmother’s home on Cummins Street and, if the weather was extremely cold or stormy, glimpses of the train could be obtained from the living room windows of our home.

Steam locomotives were still being used, and they had to be turned around for the return trip to Adrian, so a wye was necessary. (Steam engines could be run in reverse, of course, but the engineer soon developed a stiff neck and a foul disposition.)

The DT&I had a wye, the base of which ran alongside Cummins Street. This was all that remained of the former Detroit, Toledo, and Milwaukee which once ran from Dundee to Battle Creek. It was a rather hopeless little railroad which wandered across Southern Michigan and never made any money. The DT&M eventually succumbed to bankruptcy. (The DT&M trackage remaining in Tecumseh was owned by the NYC, but the DT&I also had switching rights to industries located on it.—ed.)

The west leg of the wye lay along the present location of Pawnee Heights, connecting with the Cummins Street track just east of Adrian Street. The east leg still remains today, beginning at Union Street and curving around to cross Patterson Street where it joined the west leg to form the line which proceeded south and then southwest to Adrian. 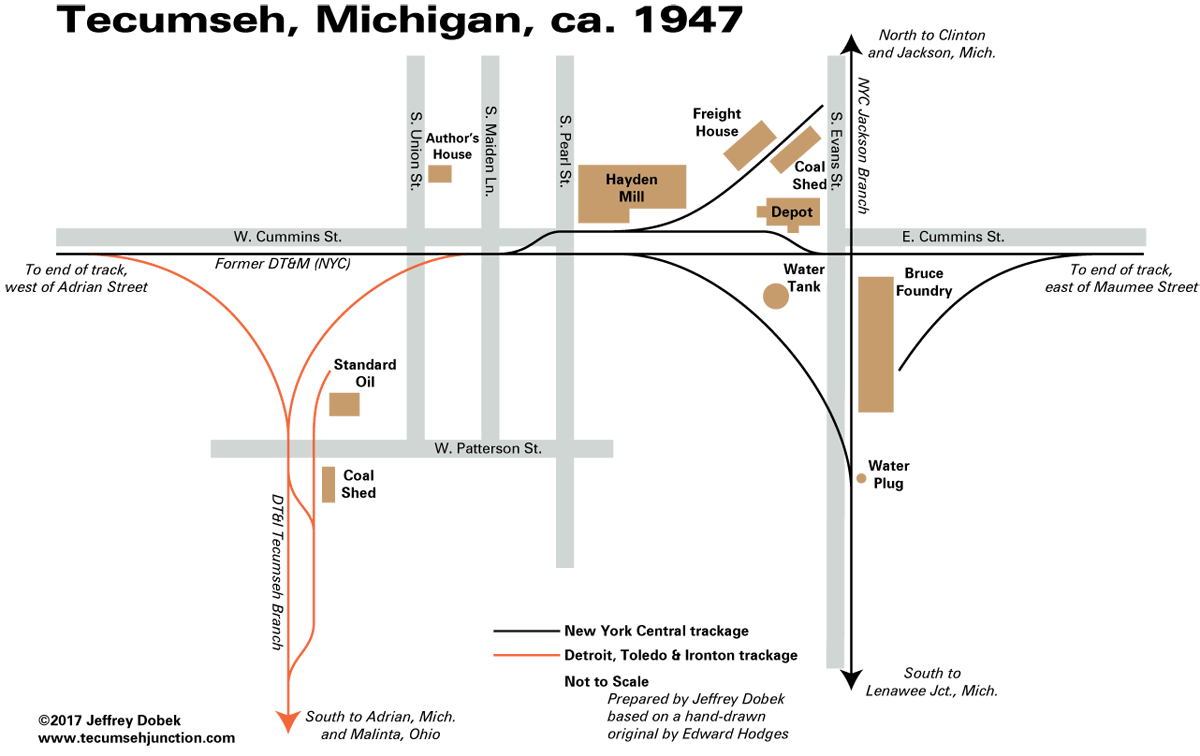 Since Union Street ended at Patterson Street at that time, and there were no homes along the south side of Patterson nor on Russell Road, the train was visible long before it arrived in Tecumseh. Appearing at first as a slowly moving, dark line along the horizon, the train soon took shape, and I could count the number of cars in the consist.

The train stopped briefly alongside a sagging coal shed on the south side of Patterson Street while the brakeman threw the switch which would route the train to the west leg of the wye. Chuffing softly, the train slowly moved around the curving track pausing again while another switch was thrown, allowing the train to enter the Cummins Street track. The train crossed Adrian Street and cleared the switch allowing the brakeman to align the rails for tbe trip down Cummins to the Hayden Mill where most of the switching would take place.

Since the train would now be running backwards, the rear brakeman attached a “cow tail” to the brake hose at the end of the caboose. A cow tail was a 6-foot hose with a standard brake line “glad hand” fitting at one end and an exhaust valve which could also emit a whistle at the other. After connecting the glad hand to the brake hose, the angle cock was opened so that the cow tail was connected to the train air line. The brakeman then rode the rear platform to sound the traditional warning whistle as the train backed across Union and Maiden Lane Streets. The sound of this whistle was high-pitched and seemed rather puny compared to the deep-throated wail of the loco’s whistle, but it served the purpose of warning motorists (and residents of the south side of Cummins who may have left lawnmowers, children’s toys, and pets between the rails that traversed their front yards).

The consist seldom varied—a couple of boxcars for Hayden’s Mill, an occasional box car of l.c.l. freight for the freight house, and a hopper car of coal which would be spotted alongside the shed at the Hayden Fuel and Supply Company’s Shed at the end of the spur.

Watched by an audience of neighborhood youngsters and their dogs, the switching would be completed quickly and efficiently. Soon, the train was ready to depart with a boxcar or two of Hayden Flour and an empty hopper in tow.

The train paused at Union Street while the brakeman “bent the iron” and then made its way around the east leg of the wye.

The locomotive’s drivers would usually slip when the train started up. I was never certain whether this was because of the sharpness of the curve or if the engineer was simply trying to impress his youthful audience.

With flanges squealing, the train disappeared behind the shed and tanks of the Standard Oil yard on Patterson Street.

Occasionally a tank car would be spotted on the short spur there and the train then resumed its trip back to Adrian.

Glimpses of the train could be seen between the coal shed, the village’s pumping station. and Frank Arnold’s large rambling home on Patterson Street, creating a peek-a-boo effect which I found rather pleasing.

The train eventually disappeared as it passed the storage silos of an abandoned gravel pit south of town and then curved to the southwest. Another gravel pit to the west of the track provided an occasional carload but this bit of switching was out of my sight and not considered part of the “show”. All that was left of the afternoon performance was the thin column of smoke left behind which soon dissipated, leaving only memories tempered by the knowledge that my smoke- and cinder-spouting friend would return the next day.

Postscript 2017—the last DT&I trains to Tecumseh ran about 1969. The DT&I Tecumseh Branch from Adrian to Tecumseh was sold to the Norfolk & Western Railway in the late 70s, and the tracks remained in place, abandoned, until the 1990s, when they were removed, along with most of the former-DT&M trackage. The NYC’s north-south line became the Southern Michigan Railroad. 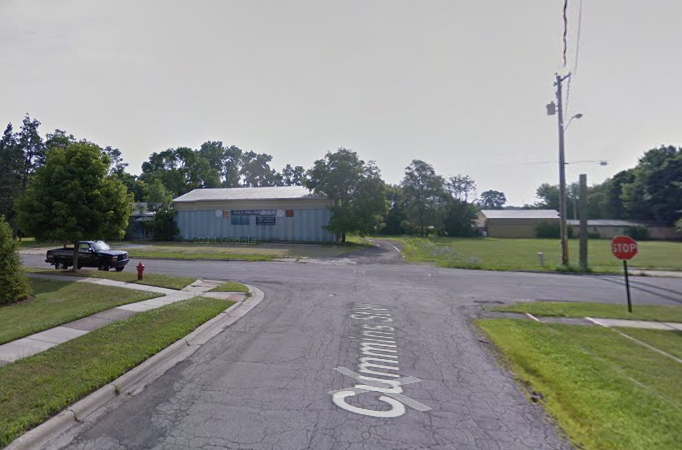 Looking east along Cummins Street—this is approximately the same location as the first photo in this article. Note little sections of track remain to the right, and in the distance, next to the Atlas II building, is a small remnant of the track that served the Hayden Mill. (Google Streetview) 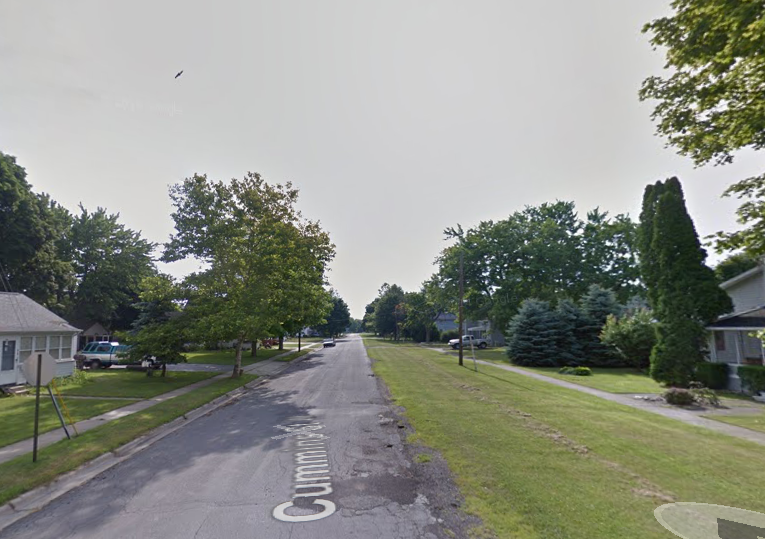 Looking east along Cummins Street at Union Street. The DT&M track ran in the grassy strip to the right. The east switch of the DT&I wye was at about this location. (Google Streetview) 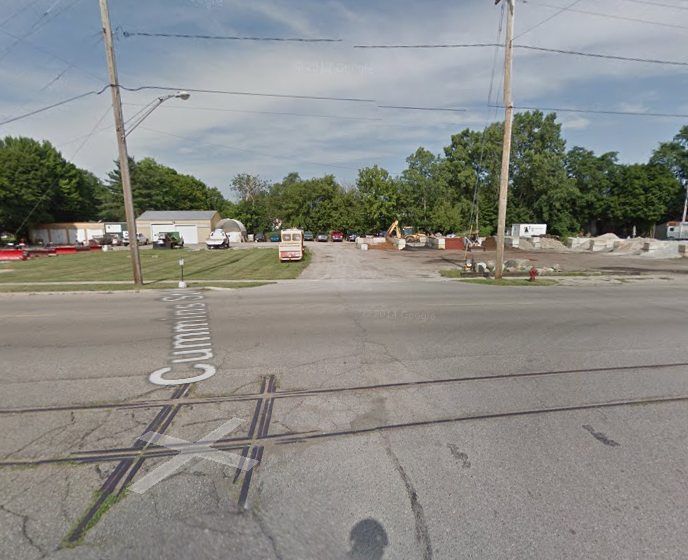 Looking west along the former-DT&M at E. Cummins and S. Evans Streets. The diamond crossing remains, but the DT&M track is gone. The depot stood behind the telephone pole to the right; it was moved to downtown Tecumseh in the 1980s.